Behold how our government takes care of the men and women who serve in the US Armed Forces.

A lengthy investigation published Thursday reveals that the Pentagon gave an inexperienced 22-year-old a $300 million contract to provide ammunition to Afghanistan. The shady deal resulted in decades old, substandard munitions being delivered to US and Afghan troops fighting on the front lines of the war on terror.

Look at this guy. 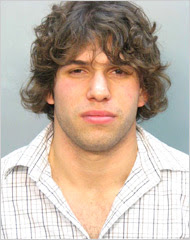 Is this somebody who should be supplying $300 million worth of ammunition to US soldiers serving on the front lines in Iraq and Afghanistan? What is he, a Mossad reject? Does anyone do any oversight anymore, or is this some kind of sick joke?

You know some psychopaths had a good laugh over this maroon sucking $300m of US taxpayer dollars to send eBay ammunition over to our soldiers, who are, by the way, fighting and dying in a cocked-up war that we were lied into on behalf of rich Americans and Israelis and in which over one million innocent people have been killed for nothing more than money.

Honest to God, if this doesn’t snap people out of their torpor, I don’t know what will. I hope this unravels the whole ball of string.