This opinion piece by Steven Kinzer ran in the Boston Globe today. It’s all about how we should be talking to Iran because we share many common interests.

IF THE next American president wisely applies time-honored techniques of diplomacy, the United States may within a few years have a new long-term strategic partner in the Middle East: Iran.

Not only are these two countries not fated to be enemies forever, they have profound strategic interests in common. Iran is the one country in the world that offers the United States a chance to reshape the global order with a single bold stroke, in a way that could decisively advance American interests. The United States has more to gain from partnering with Iran than from a partnership with any other country in the Muslim Middle East.

But why now? Why do we hear about all of Iran’s wonderful qualities now? For months and months the American people have been subjected to intensive propaganda setting Iran up for a fall. Now Fallon has been forced out of the way. It's time for the fall.

But what happens after that?

The fact that anything even potentially influential gets printed in the pages of our corporate media always means something. If they didn’t want you to hear it, they wouldn’t print it. So this opinion piece must be viewed in that light. Could it have something to do with plans for The New Middle East, which is yet another neocon dream? Look at the map: 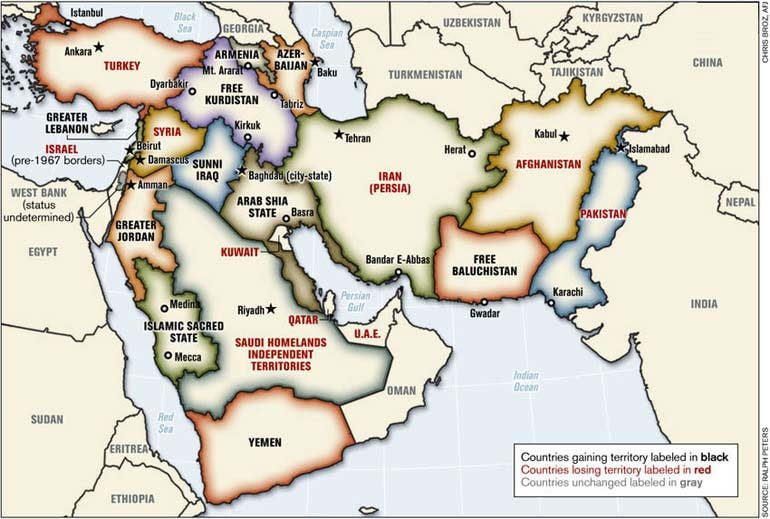 I wrote about this back here as I was trying to make sense the claim that ‘We Hate Iran’ with evidence that Iran controls large portions of Iraq.

This opinion piece, earnest though it may be, comes out now for a reason. The time has come to begin the process of reframing Iran as good, because in the end Iran will have a large, central role in the new map. Spring has sprung, and they are planting the seeds for the next chapter in their grand adventures of global domination. It will be time soon to redraw the lines on the map, to tell billions of people which country they live in.

It’s kind of ambitious, don’t you think? People may not take kindly to having their borders redrawn by imperialist powers (just a guess).

But the neocons have a plan. They always have a plan. How they’ll get from ‘Iran Is Bad’ to ‘Iran Is Good’ will most likely involve some event that will ‘Change Everything’.

Hey it worked before, right? Right??

I love your blog, and your truly independent and personal opinions.

I am a bit surprised that of all the theories about the "why:s" and "what:s" speculations regarding the US covert and overt policies regarding Iran, one option is rarely put forth - namely that the people pulling the political strings for whatever corporate or ideological interest they represent, are actually aligned with those of Iranian politicians.

In fact, is it not a fact that both the Iranian and US regime benefits from presenting one another as threats, to create internal unity and a cover for upholding supression of dissent and militarization?

US has exchanged weapons and intelligence with Iran in the past, and it has been proven extensively that there are little qualms about who one cooperates with when it serves monetary interests?

What if we - if nothing else than for argument's sake - presume that there are coordination between the Iranian and US regimes, allowing them to make sure that certain statements from one come at a time whenever it benefits the plan of one party or both. Could that not be of great benefit, for example, whenever the US regime need an excuse for increased oil prices or more troops deployed?

I doubt that the alliance with Israel would prevent such cooperation, since both US and Israel has been part of arming Iran.

If one needs an external enemy for political purposes, what would be better than an enemy that acts in ways one wants him to when one wants it and does this because it serves a mutually beneficial purpose?

What would prevent an Iranian leader from engaging in this kind of coordination?

Wow. Well first of all, thank you so much for reading here.

I think your insight cuts right through to the bone. We keep hearing this 'story', this 'narrative' about all these different players and the various events. But they don't really make sense all the time, especially when you start digging around outside the corporate media.

Only when you start moving the pieces around in supposedly forbidden ways does it make sense. And then you're either blowing people's minds or you're a crazy conspiracy theorist. Either way people will likely shut you down.

So YES!! I think you're right about this, and I thank you and applaud you for having the courage to think your own thoughts and to also express them. This is the essence of freedom, and you gots it.

I thank you - both for your compliments and for your participation in the important exchange of thoughts.

It is interesting that we so easily buy without much critical thinking the notion that those our leaders call enemies really are enemies, when in fact the same people would benefit much more if they were cooperating and colluding.

Again, I see little that would prevent such cooperation from taking place.

Thank you once again, and hope to see you soon