The House of Cards

Back in August I spoke with a guy who sold us a few financial products. He insisted, insisted, that this sub-prime thing was not a big deal. I took some of my money out of the market, a decision he really advised against. He thought the economy was doing great. People like me are just too damned negative.

I distinctly remember telling him the economy is a ‘house of cards’.

This morning one of the networks ran a graphic of a house of cards collapsing, eliciting a hearty snort from me.

I have used Herculean restraint not to email some snarky remark to him, especially since his company sends me a monthly pdf letter from their Kool-ade drinker-in-chief. The last letter wryly admitted that things weren’t going so swell but then hunkered down into the team huddle. This is what we’re gonna do….

In any case, I have no financial expertise to offer anyone. All I can tell you is this: when network tv shows a graphic of a house of cards collapsing to describe what ‘might happen’ to the US economy, well, it’s too late. We have a runaway train on our hands here, and it stops by crashing at the bottom of a ravine and turning into a smouldering heap.

By the way, look at this picture of Bush doing a little dance on March 8, 2008. What do you suppose has him in such a good mood? Perhaps the destruction of the American middle class? The bankruptcy of our nation? The nearly 4,000 dead American soldiers in his war of choice? The exciting plans for the next war? One million dead Iraqis? Shredded Constitution? Dictatorial power? Martial law? I suppose if your goal is to destroy America, you might be in a really good mood right about now. 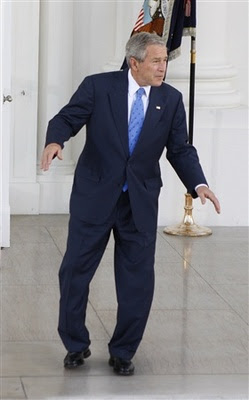