American Citizens, do you know this is happening? 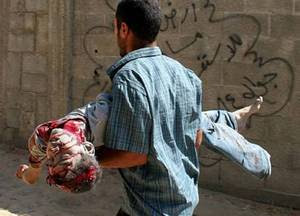 A single rifle bullet, another victim - but no hope of a doctor

We will never forgive or forget

Israel: Chronicle of a Disease

Did you get a newspaper today? It’s not on the front page, though that’s where it belongs. They won’t preempt your sports coverage to tell you about the IDF murdering the Palestinians with weapons you paid for, American Citizens.

Wasn’t it enough that we killed and displaced over a million people in Afghanistan and Iraq? Do we have to sit aside quietly now because this is Israel’s problem? Do you think we are to wait patiently for a magical ‘peace process’ to work, a process which will never work because Israel has no intention of ever letting it work? Do you think that Condi Rice, that incompetent nitwit, will fly over there tomorrow and make the Israelis stop the massacre?

Recently I was talking with someone about a little scam I’d heard about. The person was incredulous. She said it couldn’t be true because 1) it was so scummy and 2) she hadn’t heard about it.

But that doesn’t mean it’s not true.

If you want to know what’s really going on in the world, you have to do some information shopping. You have to make an effort. The people in charge are not going to serve it up for you on a silver platter, because you would be as horrified as if they gave you Saint John the Baptist’s severed head. That’s how mind-staggering the truth is.

This is what’s happening right now: The Israeli’s are murdering the Palestinians with impunity and sadistic pleasure. US warships are parked off the shores of Lebanon. Israel wants to start a war that American soldiers will fight. Lot’s of innocent people will die. It will turn into WW III.

That is their plan.