US and NATO hop the fence 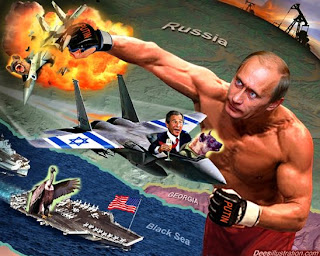 Another great Dees illustration and Lord Stirling (The Frightening) piece can be seen and read over at s o s. I just wanted to point out for my little cabal of readers a map of the Black Sea area (good for zooming).

There's only one way for US and NATO ships to get in there, and it's through the Bosporous at Istanbul, Turkey. Being a very narrow strait, it would seem easy to control. This indeed puts Turkey on the hot seat between their neighbor Russia and NATO. If they let the ships in (which they have so far under some ancient limitations they rustled up from a bottom drawer), they piss off Russia. Otherwise, they piss off NATO. Good luck with that.

You can click on the map to enlarge the area. It's less than one mile wide and maybe 15 miles long. Before they even get there, the ships have to go up around Greece, through the Dardanelles, and then through the Sea of Marmara.

My point simply being that when people talk about this being in Russia's backyard, they might add that Russia has a six foot stockade fence around the premises. Any ships going into the Black Sea do so very deliberately. It's not like sailing around in the open ocean and haplessly floating into the Bermuda Triangle. It's more like having hostile Russian ships in Lake Ontario. You can see why it would make them angry.
Posted by A. Peasant at 6:29 PM