All Roads Lead to the Corrupt Octopus 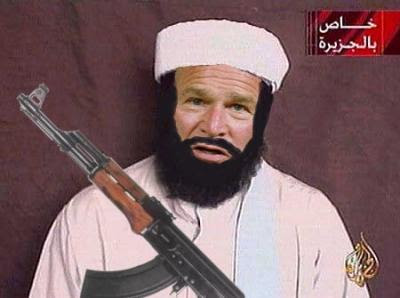 Osama bin Laden (who is dead) threatens yet another attack against the US that would 'outdo by far' the 9/11 attacks.

A source close to the al-Qaeda leadership in Yemen has warned in a report that a new attack against the US will aim 'to change the world [both] politically and economically'.

The report published by an Arabic-language newspaper in London, Al-Quds Al-Arabi, claimed that Bin Laden is closely supervising preparations for the attack, which will be far greater than those of 9/11.

The former Yemeni operative added in the report that the terror group is currently in a 'positive phase' of staffing and rebuilding training camps around the globe.

The report cited the unnamed source as claiming that al-Qaeda may provide indications of its future plans over the next few days.

Just so you can keep score at home exactly who has terrorized you in the past, present and future, though they very graciously give you plenty of warnings so you can be in a good state of panic first.

For instance, the Bush Administration accused the MEK (Mujahedin-e Khalq Organization) of having 1000 pages of documents found on a stolen laptop which proved that Iran was seeking nuclear weapons. But these documents originated in Israel.

Since 2002, new information has emerged indicating that the MEK did not obtain the 2002 data on Natanz itself but received it from the Israeli intelligence agency Mossad. Yossi Melman and Meier Javadanfar, who co-authored a book on the Iranian nuclear programme last year, write that they were told by “very senior Israeli Intelligence officials” in late 2006 that Israeli intelligence had known about Natanz for a full year before the Iranian group’s press conference. They explained that they had chosen not to reveal it to the public “because of safety concerns for the sources that provided the information”.

Shahriar Ahy, an adviser to monarchist leader Reza Pahlavi, told journalist Connie Bruck that the detailed information on Natanz had not come from MEK but from “a friendly government, and it had come to more than one opposition group, not only the mujahideen.”

Israel has maintained a relationship with the MEK since the late 1990s, according to Bruck, including assistance to the organisation in beaming broadcasts by the NCRI from Paris into Iran. An Israeli diplomat confirmed that Israel had found the MEK “useful”, Bruck reported, but the official declined to elaborate.

In other words, some governments may decide to use 'terrorist' groups to bring certain information into the public domain. They do this to facilitate their agendas. And this friendly arrangement somewhat belies the fact that the 'terrorists' and the 'friendly' governments are not so much in opposition really. You could say they work on the same team.

And sure enough, the MEK shows up on this list: (scroll down to the Ms -- it's a long list)

Instruments of the World Revolution

While we await the imminent stand-off between the United States Revolutionary Criminal Klepto- Government and the US military, who realise that the United States is in the position of Germany in 1933 and who are telling US that they will act with the honour and integrity that the German military lacked then, we can contemplate the following list of Revolutionary, Terrorist, Drug-Trafficking and Para-State Entities which form components of the WORLD REVOLUTION through which we are all (still) living. By drawing attention to such external entities, the American authorities (and those of other criminalist Governments) typically aim to divert attention from their OWN odious terrorist and drug-trafficking operations, which are beyond despicable and MUST be exposed as we continue to rack up progress with unmasking the Octopus-like, self-destructing World Revolution generally.