To make it look good and provide a little cover...

It happens on a major holiday. People are busy doing other things besides digging around on the computer. The news they get is most likely from TV. CNN? Yes. Pesky bloggers? No.

The perpetrators are young, and they ask for British and American guests.

"They were very young, like boys really, wearing jeans and T-shirts," he said, adding that he and another hostage managed to escape on the 18th floor.

But they're not very effective in killing the actual targets. Despite their bags of almond snacks, the terrorists kill mostly innocent bystanders. Confusion reigns about whether or not the high-value (ie: British, American and Jewish) hostages have been released. Keep on worrying everyone.

Naturally, Al Qaeda immediately rises to the top of the suspects list. The responsible group, however, has never been heard of before. Somehow these terrorist cells always miraculously escape intelligence and burst onto the scene completely unexpectedly. Which is weird, you know, that they're so good at avoiding surveillance but yet they suck at the nuts and bolts of carrying out an effective terrorist attack. Hmm.

But we know that these terrorists are vicious young Islamic extremists and Muslim militants. What other explanation can there possibly be?

Here they are with George W. Bush: 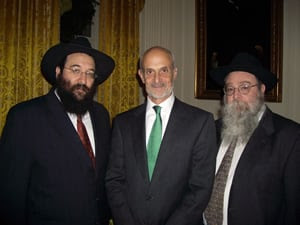 And here are some with Michael Chertoff. These rabbis have had their pictures taken with many famous people. Go ahead and look it up. Look up what they stand for. Have you ever heard of them? Do you think they are some obscure, harmless rabbis? Think again. These are powerful people who throw their weight around at the highest levels.

But can't you just hear it now? "Oh, gee whiz some nice Jewish scholars were attacked by evil Muslim Islamofacist terrorists in India! What are we gonna do, Louise? And they attacked British and Americans citizens, too! They must hate us for our freedoms, and they're anti-Semitic to boot! Goodness gracious. What's this world coming to??"

Here's background on the Chabad Lubavitch from Michael A. Hoffman II and www.RevisionistHistory.org:

Some 200 attorneys and jurists packed a ballroom of the Madison Hotel in Morris Township, N.J., for two presentations dealing the nexus between civil rights law and Talmudic jurisprudence.

The topic for the second-annual Jewish Law Symposium, a project of Chabad-Lubavitch of Southeast Morris County, was "Democracy and the Uncertain Fate of Individual Rights."

Leading off the discussion was New Jersey Supreme Court Justice Barry T. Albin, who tackled the traditional American concept of civil rights; Rabbi Shlomo Yaffe, dean of the Institute of American and Talmudic Law, gave attendees the Jewish approach to the issue.

In a surprise appearance, the newly installed chief justice of the New Jersey Supreme Court, Stuart Rabner, shared a few words with the crowd before turning the dais over to Albin.

The laws and ethics of the Talmud have served as a cornerstone of humanity's civil and moral infrastructure, while shaping it's legal systems," said Rabbi Shalom Lubin, founder of the Jewish Law Symposium and executive director of the sponsoring Chabad House."

MICHAEL A. HOFFMAN'S NOTE: The "Institute of American and Talmudic Law" (see below) was co-founded by Nathan Lewin, Supreme Court Justice Antonin Scalia's close friend. Lewin is a member of the institute's faculty. Mr. Lewin is on record advocating the killing of the parents and siblings of Palestinian suicide bombers. Justice Scalia is a staunch supporter of the institute, which teaches American judges and lawyers how to apply rabbinic halacha to US courts. There was widespread condemnation of Rowan Williams, England's Archbishop of Canterbury, when he said recently that some of Islam's Sharia law should be allowed to play a part in British jurisprudence. But the incorporation of Talmudic law into the US judiciary raises nary a whisper of disapprobation from the crusaders for "Western values"who denounced Williams. Do they imagine that rabbinic law is a western value? Note that the state education departments of New York and Pennsylvania officially accredit the Institute of American and Talmudic Law. Needless to say, the association of the Talmud with "civil rights" for gentiles is chutzpagh with a capital "C." Such falsification would leave even George Orwell speechless.

Outrage and accusations from India:

Our worst fears have come true. It is clear that Mossad is involved in the whole affair. An entire city has been attacked by Mossad and probably units of mercenaries. It is not possible for one single organization to plan and execute such a sophisticated operation. It is clear that this operation was backed by communal forces from within the Indian State. The Home Minister Shivraj Patil should resign. The RSS-BJP-VHP-Bajrang Dal should be banned. Advani and others ought to be arrested. Today is a day of shame for all Indians and all Hindus. Muslims and secular Hindus have been proven right. RSS type forces and Israel are all involved in not only destabilizing but finishing India. India should immediately snap all relations with Israel. We owe this much to Karkare and the brave ATS men who had shown the courage to arrest Praggya Singh, Raj Kumar Purohit, the army officer and several others.

An explanation that actually makes sense:

Factor analysis - Means, Method and Motivation: Powerful western media organisations reinforce their opinions with repetition, linking assaults like these with former "Islamist attacks" and another "terrorist attack". Their logic and factor analysis use (1) the weapons used, (2) the similarity of past attacks by "Al Queda" and (3) motivation. But of course they never consider the possibility, based on this same factor analysis, that the architects may be the CIA and/or Mossad.

Means: That the most powerful military machine in the world has the means to arm groups like the one who is carrying out the Mumbai attacks requires no apology or defense.

Method: History is replete with examples of U.S./Israeli use of a surrogate to attack their enemies. William John Fox pointed this out in his exemplary analysis, Deliver Us From Chaos: Ten Political Commandments. In 1953 they used domestic terrorism to overthrow Mohammad Mosaddeq, former Prime Minister of Iran. They used the Afghan Mujahideen to attack Russia in the same year of their resistance. The CIA and the U.S. ambassador secretly engineered the “Rose Revolution” in Georgia in 2003 and "the U.S. encouraged the Israeli-trained Georgian army to invade the disputed enclave of South Ossetia five years later".

Motivation: The only difference between the factors used by the capitalist media and ours is motivation. Regarding motivation, CNN states "they (Deccan Mujahideen) want to create as much damage and attention to themselves as possible". CIA/Mossad are masters at destruction, but the last thing they want is bringing attention to themselves. Motivation for the U.S. to take it's war to Pakistan fits perfectly with these attacks. As a matter of fact, Barack Obama and Joe Biden already declared their intention to take the war to Pakistan and stated with certainty that Obama's "mettle would be tested" by a major international "incident" in the near future. If the perpetrators want to draw attention to themselves, their method (i.e. killing civilians), simply does not make sense unless one buys the Bush regime's religion-based simplism that they are simply "evil". Militant's fighting for causes such as independence or national sovereignty want least of all, international negative attention or popular hatred. The only thing missing from the corporate media explanation is George W. Bush's idiotic claim that "the terrorists are jealous of our freedoms". Using this the corporate media's methodology, it is entirely reasonable and just as easy to implicate the CIA and Mossad.

To be continued, probably in Pakistan.
Posted by A. Peasant at 5:36 PM

Not sure if this is a false flag or not. (But then, how could I be?) If it is, Pakistan is provoking a partition of Kashmir, which should happen anyway.

ISI-run Pakistan is obsessed with buffers between it and India, urgently now, and Iran as usual. A tribal Afghanistan suits their interests beautifully, and a separate bad-ass Kashmir would be a perfect heat sink for India's attentions.

(Disclosure: I am a long-time admirer of the ISI and Pakistani statecraft. I just wish they hadn't helped blow up my city.)

Well, at least the unraveling process happens a lot faster than it used to. Maybe the terrorists should do a cost-benefit analysis: if they plan and prepare for years, but the cover-up and confusion lasts only a week, is false flag terrorism really worth the investment? I suppose only if you really, really LOVE inflicting terror and death on innocent people, or if you can guarantee knee-jerk reactions within hours or days, tops.

Algorithmically, you'd have to figure 1 + 4x casualties over proximity to last event for a successful false flag. India's 9/11 doesn't seem to clear the bar. One crazy guy walked into a Jewish Center in Seattle and caused more fatalities.

This is where the corporate media echo chamber comes in handy, you know, to 'catapult the propaganda.'