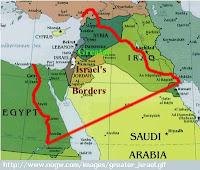 That red line is drawn around the (imaginary) territory called "Greater Israel's Borders."

Let's see: half of Iraq, all of Lebanon and Jordan, most of Syria, a big giant chunk of Saudi Arabia, and a generous hunk of Egypt. Maybe a little Turkey, too. Yeah. I'm sure nobody has a problem with that. Seems reasonable...if you're a megalomaniacal psychopathic excuse for a human being.

See kids, that (CIA-asset and AQ head terrorist, aka Tim Osman) Osama bin Laden, got it all wrong in 2003. He is such a propagandist, that Osama. And a terrorist. So you should not listen to anything the (dead) man said. Obviously, he put forth these vicious ideas to slander the Jewish State, which is peace loving, by making these disparaging and silly claims:

In February 2003 an audiotape purportedly from Osama bin Laden called President Bush "stupid" and claimed American war plans against Iraq were part of a plot to attack Muslim nations in the Middle East and North Africa. The United States' goal in waging war against Iraq is to change the regional map to benefit Israel, according to the raspy voice said to be bin Laden. "It is clear that the preparations to attack Iraq are part of a series of attacks prepared for nations of the region including Syria, Iran, Egypt and Sudan," the voice said. "The aim of the Crusaders' campaign is to prepare the atmosphere for the establishment of the so-called greater Israel state, which includes great parts of Iraq, Egypt, Syria, Jordan and large portions of (Saudi Arabia)," it said.

This conception of a Greater Israel encompassing much of the Middle East is evidently a pervasive element of popular culture in the region, and it is easy to understand how this would be taken up by bin Laden and other propagandists. By asserting that Israel seeks to occupy the territories of many other countries in the region, it places the Palestinians on the front line of a struggle common to all people in the region.

That is just riDICulous.

On 04 September 2001 a demonstration was held in Jerusalem to support of the Idea of the State Israel from the Nile to the Euphrates. It was organised by the movement Bead Artzein ("For the Homeland"), headed by rabbi and historian Avrom Shmulevic from Hebron. According to Shmulevic, "We shall have no peace as long as the whole territory of the Land of Israel will not return under Jewish control.... A stable peace will come only then, when Israel will return to itself all its historical lands, and will thus control both the Suez and the Ormudz channel.... We must remember that Iraqi oil fields too are located on the Jewish land."

Yes. Let us remember that. I would suggest you remember all these things when you see the latest hasbara campaign promoting Israel as a victim of Iranian-backed terror.

TIP's ad campaign is designed to encourage the world community to work for a peaceful solution to the Iranian nuclear crisis and to increase awareness that Iran is largely responsible for training, arming and funding Hamas, which has fired 6,500-plus rockets at Israeli civilians since Israel completely withdrew from Gaza in August 2005. The ad is scheduled to begin running Monday on CNN, CNN Headline News, Fox News Channel and MSNBC, and will be broadcast more than 600 times overall. [Is that all? People should be ready to gouge their own eyeballs out after only the first 100 times.] Yesterday, in her confirmation hearing, Secretary of State-Designate Hillary Clinton also focused on the need to stop the threat of Iran.

Click through for the gory detail, and get ready, because here it comes. More whining from Israel. More victimhood. More war. More money. Crying and shooting, all the time. Always thinking that we goyim actually believe that we really are cattle, and the Jewish people really are superior, and of course we should turn over every lever of our government to Israel and lay down our very lives to kill Arab people for Israel's sake, if that's what they require to be happy.
Posted by A. Peasant at 2:58 PM

(Oops, sorry, posted this in the wrong place. Not on my third cup of coffee, should know better.)

All made possible by the Israeli Ministry of Truth, or as they call it, the National Information Directorate.

Israel believes its has won broad international support in the media for its actions in Gaza thanks to its PR strategy, which through a new body has for months been concerned with formulating plans and role-playing to ensure that government officials deliver a clear, unified message to the world's press. The body, known as theNational Information Directorate, was set up eight months ago following recommendations from an Israeli inquiry into the 2006 Lebanon war. Its role is to deal with hasbara - meaning, in Hebrew, "explanation", and referring variously to information, spin, and propaganda. The directorate's chief, Yarden Vatikai, said: "The hasbara apparatus needed a body that would co-ordinate its agencies, coordinate the messages and become a platform for co-operation between all the agencies that deal with communication relations and public diplomacy."

The directorate acts across ministries and decides key messages on a daily basis. Of its core messages for the media, there has been the advice that Hamas broke the ceasefire agreements with Israel; that Israel's objective is the defence of its population; and that Hamas is a terror organisation targeting Israeli civilians. "In general, we think we are succeeding in getting the message across," said Vatikai. Israeli officials have also enjoyed a clear edge with coverage. An Israeli foreign ministry assessment of eight hours of coverage across international broadcast media reported that Israeli representatives got 58 minutes of airtime while the Palestinians got only 19 minutes. ...

Eight months ago? Been preparing for the Gaza Massacre for a long time, eh?

Uh, the most recent Gaza Massacre, that is.

The Prince of Liars tells another whopper. Israel was the one that broke the cease-fire back on November 4, right during the US presidential elections.

Just another curious coincidence of dates and Israeli actions, I'm sure, no?

This is a good one. I am over at the original and will put it up at AA News. Thanks.

Greg, you guys are great! Thanks.

Fox in charge of henhouse says his replacement is too fair and gasp! even-handed.

Foxman: George Mitchell is too ‘fair’ and ‘even-handed’ to serve as Middle East envoy.»

The media is reporting that former Sen. George Mitchell, who handled the Northern Ireland peace process, is being eyed by the Obama administration to be a top diplomatic envoy to the Middle East. In 2001, Mitchell produced a report on the Middle East which recommended that Israel freeze all its settlement activities. Without a freeze, a cessation of violence would be “particularly hard to sustain,” he argued. While Mitchell’s impending appointment is earning a great deal of praise, the Anti-Defamation League’s Abe Foxman complains the diplomat is too fair and balanced for the post:

“Sen. Mitchell is fair. He’s been meticulously even-handed,” said Abraham Foxman, national director of the Anti-Defamation League. “But the fact is, American policy in the Middle East hasn’t been ‘even handed’ — it has been supportive of Israel when it felt Israel needed critical U.S. support.”

“So I’m concerned,” Foxman continued. “I’m not sure the situation requires that kind of approach in the Middle East.”

If there is a more odious sack of shit other than the ADL's Abe Foxman, I am at a loss to find that clunker in the toilet bowl.

Maybe I'd better check inside the plunger, perhaps a Zionist turd got stuck there, hmm?

Let's see how far MItchell makes it in the nomination process.

If he does survive and goes in front of the Senate for confirmation, he'll be savaged by traitorous US Senators on the committee that are loyal to Israel, not the USA.

;)
Well, somebody must be organizing support for him somewhere. Let's find out and pile on.