Of course we have nothing to hide. Don't be ridiculous.

Excerpted bits from an article in the Jewish Daily Forward on Thursday, January 15, 2009, regarding the little kerfuffle with dear Condi:

“I have no problem with what Olmert did,” said Abraham Foxman, national director of the Anti-Defamation League. “I think the mistake was to talk about it in public." [Ding!]

“This is what friendships are about. [Wince.] He was not interfering in political issues. [??? Alternate universe? I dunno. Looks like that is exactly what he was doing to me.] You have a relationship, and if you don’t like what is being done, then you go to the boss and tell him.” [Meaning, you go to the guy playing "boss" for the American people, aaaand...boss him around. Because he is so not the boss. Are you %$&& kidding me?]

Israel and Jewish groups, including Aipac, the ADL and the American Jewish Committee, opposed the draft’s language, which they saw as one-sided. [Meaning, not one-sided enough.] They also felt that the draft stood in contrast to Israel’s demand not to give it equal standing with Hamas in the resolution. [Israel demands, the US supplies. 'Cause we're "the boss," see? slap slap]

During a January 5 conference call with Jewish activists, Malcolm Hoenlein, executive vice chairman of the Conference of Presidents of Major American Jewish Organizations, gave special priority to blocking the international body from taking a stand on the Gaza issue. “We need to work hard to ensure the Security Council doesn’t pass a resolution,” Hoenlein said. [Planning ahead. Very nice.]

Aipac issued a statement January 6 condemning the U.N. resolution and criticizing the Bush administration for not using its veto power and instead “succumbing to pressure exerted by Arab states.” [I think the technical term for this brazen 180 degree spin of reality is "chutzpah."]

The ADL expressed disappointment with the administration in a written statement: “We expected the Administration to abide by its longstanding commitment to fighting global terrorism and the scourge of anti-Semitism, and Israel’s role on the front lines of that fight.” [Cue many tissues here.]

The tough words from Israel and Jewish groups toward the outgoing administration will make little difference for Bush and Rice, who leave office January 20. But they will serve as a message to the incoming administration led by President-elect Barack Obama and his choice for secretary of state, Hillary Rodham Clinton. [Just a little preemptive keeping "the boss" in line action, which is how "friendships" work. See?]

“This reinforces the perception [Meaning, reality.] that the Israeli prime minister and Israeli leaders have easy access to the leaders of the U.S.,” Bloomfield said. “It is a fact that the Israeli prime minister can get the president on the phone. Not every prime minister in the world can do that. It is no secret that Israel tried to influence the U.S. regarding U.N. votes. It [Meaning, presumably, Olmert's public bragging.] reinforces what the rivals of Israel say about the enormous clout Israel has in Washington, and I see nothing wrong with that.”

But Bloomfield added, “It is a mistake to talk about it.”

So in other words, the "rivals of Israel" who complain bitterly about Israel's clout in Washington are correct in their assessment. But nobody is allowed to talk about these certain facts and non-secrets. Not that there's anything wrong with these facts and non-secrets. Not at all. Just don't talk about it. That would be anti-semitic. That's all. 'Kay, sweetie? Thanks, hun. Mmmwah! 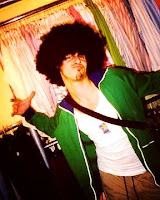 Update: Don't miss this comment thread and these words of wisdom from a fair citizen of our fair country...

Let me re-phrase that: when you have an Israeli PM able to call a sitting U.S. President, interrupting him while he is giving a lecture and ask him to have his own country veto a UN resolution that his own Secretary of State had drafted, it is very clear, crystal clear, that America is Israel's de fact representative for Israel's foreign policy in the middle east, and has been completely seconded to Israeli policy since the false-flag terrorist attack on 911.

Furthermore, as long as Israeli companies and dual citizen Israelis are allowed to contract out our phone call billing, vet (create) our intelligence, head our senate intelligence committees, staff our Pentagon and OVP, run semi-secretive organizations that are organized around mobbing technology like MEGAPHONE/GIYUS.org, and investigate and be suspect in the very terrorist attacks that have created our police state, they will control both sides of the terrorist equation; and because of this, it is guaranteed that the horrors being visited upon the Palestinians... the check-points, the loss of due process and summary round-ups and arrests, the random shootings and murders, the destroyed infrastructure and lack of medical care for the wounded and dying, the dead being eaten by roaming animals is going to happen here in the United States.