Talk to the Hand: Resist the NWO 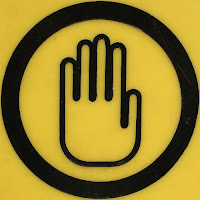 Communism. Nazism. Zionism. These movements are all just different facets of the same evil impulse to enslave humanity under totalitarianism. The Illuminati dangle baits, hoping to lure people into traps. They want people to fight each other. When the people oblige, expend their blood and treasure, and finally demand a solution, the Illuminati miraculously pull exactly the right cyanide-laced casserole pre-cooked out of the freezer. Just pop it in the media oven for an hour, and you're good to go. Just like the Patriot Act.

It is becoming apparent that the frenzied Israeli attack on the people of the Gaza Strip was designed specifically to inflame Hezbollah and provoke them into a war with Israel; a war that would quickly escalate to involve Iran and the US for the purpose of ultimately bringing about regime change in Iran. Furthermore, this was all supposed to happen before Bush left office when it was hoped that war with Iran would be unavoidable by the time Obama took office.

Well, that didn't work. The Arab countries did not take the bait. Good! So they move on to Plan B. Let's say Plan B is this hasbara campaign to internationalize Gaza while simultaneously claiming that Iran is funneling weapons to Hamas.

The central theme of the propaganda here is this:

And what better way to further this agenda than to broadcast it directly into the minds of Americans via 600 television spots ?

So you see, the attempt to corral US public opinion continues. But this battle has shown to be more difficult than they imagined, too, because of the internet. Good, people. Good!

And Plan C might be the CFR idea for the world to pay reparations to the Palestinians. Ha. With what money???

And Plan D might be a false flag attack. And so forth. Basically, they will keep pulling poisoned dishes out of the freezer depending on how things go, and what options open up, and what options close down. This is what they do in think tanks -- they cook up all these poisoned dishes and freeze them for later. And of course, everything is compartmentalized, so most people can go about their work earnestly believing in their noble contribution to mankind, while being subtly managed to take this or that circumstance into consideration.

So a lot of planning goes into world domination, you know. It's not for nothing. I think people should really appreciate how hard our think tanks and luminaries work to enslave humanity. Imagine their dedication. Recall that w once said, "Our enemies are innovative and resourceful, and so are we. They never stop thinking of new ways to harm our country and our people, and neither do we." True.

And the correct response to extricate your mind from this manipulation is to love humanity, and to love the truth. Refrain from getting sucked into the dialectical constructs put forth by sneaky agitators. Reject the lies and the liars. Reject and resist. These people are evil.

Satan cannot do evil except through a human body. Although "a murderer from the beginning," it cannot murder except with human hands. It does not have the power to kill or even harm by itself. It must use human beings to do its deviltry...Satan's threats are always empty. They are all lies. In fact, the only power that Satan has is through human belief in its lies.

Although it has a real power, Satan also has glaring weaknesses...Its pride overcomes its intelligence, so that the demon of deceit is also a showoff...It could not allow itself to lose....By virtue of its extreme self-centeredness, it has no real understanding of the phenomenon of love...The notion of sacrifice is totally foreign to it...When they are behaving with love, Satan is completely ignorant of the ground rules. - M. Scott Peck, People of the Lie, p. 206-8

Does this remind you of anything? It should. The Illuminati worship occult, Luciferian (the light-bearer) forces. Look at the behavior of Israel, which calls itself a "light unto the nations." And look at all the bragging, and the lies, and the self-centeredness. Here's your Synagogue of Satan: the money-changers (bankers), scribes (media) and Pharisees (religious charlatans), just as in the days of Jesus Christ. The Illuminati plan is to destroy all governments and religions by dividing the masses (goyim, cattle). The poor Palestinians live on the front line of this battle. May God protect them as people around the world join the resistance.

At the benediction on Tuesday, the pastor closed by saying, (paraphrase) "May all those who do justice and love mercy say Amen, say Amen, and Amen!" And the crowd resounded each time, and I am quite sure that millions of people watching around the world also said Amen. And I knew that God would hear our prayer, because it was heartfelt. God knows that His creation suffers greatly from the spirit of evil which prowls through the world seeking the ruin of souls, and He will help us. But you have to do your part. You must resist the evil. The resistance begins in your mind and in your soul. You are not a piece of cattle. You are a human being. Raise your hand and resist.
Posted by A. Peasant at 11:02 AM

If Iran was truly supplying Gaza with weapons, then we'd see some shoulder fired, SA-7 surface to air missiles taking down those American made F-16's and American Apache helicopter gunships ravaging Gaza.

Or some of those American made Stinger surface to air missiles that we supplied to Afghanistan in the 1980's.
There are reportedly around 200 or so of those Stingers floating around and they're still potent.

So why isn't Gaza using shoulder fired SAM's to knock down the IAF weapons of war?

Why do I occasionally find myself wondering what the world would be like without Israel?

And thinking that the world would be a much more peaceful place.

Indeed. There's a stunning lack of *evidence* for almost all of Israel's claims.

Now we know the real reason Caroline Kennedy dropped out of the NY Senate seat race, she wasn't a unswerving supporter of Israel and didn't kiss up to AIPAC. The Iranian blockade bill, which is an act of war against Iran, was written by AIPAC and supported whole-heartedly by the incoming Senator Gillibrand.
Gillibrand is a turncoat, elected to end the Iraq War, she instead became a cheerleader for that debacle and is trying to jumpstart another.

Wonder who changed her mind?

AIPAC wrote House Resolution 362 to commit Congress to spill more American blood and waste more American treasure in support of the present Israeli government’s suicidal policies that have already bankrupted our nation and made Israel much less secure.

We busted our chops defeating Sweeney and replacing Boehlert with a Democrat. In 2006 we elected Arcuri and Gillibrand to end two wars. Now they’re running for reelection by co-sponsoring a third one!

I have also read she received death threats to help her come to her decision.

And why do we allow lobbyists to write legislation? That is so fucked. Not only should they not be involved, but the revolving door between lobbyists and congressional staffers should be jammed for five years between jobs with jail time for violations. Bright, bright lines.

And the teevee news says only that she dropped out due to unspecified tax issues that involve a nanny who may have immigration issues.

Whether or not that is valid, it will effectively serve as a subterfuge to disipate mass attention from the AIPAC control issue for America's sheeple.

Thank you for letting me know who wrote that legislation and let us all do what we can to clearly label acts of war as they surface in our federal government.

Dropped out due to tax issues?

BS, that was a front story to cover up the fact that the Zionists didn't want Kennedy in that office.

Hell, non-payment of taxes isn't an obstacle to being appointed to a high office, just ask the new US Treasury head, GEITHNER.

The Zionist mob front/gang ADL will probably being singing praises for Gillibrand.