I need a CASE of tissues over here, stat!

Elie Wiesel cannot forgive Bernie Madoff. Wiesel's "little foundation," built no doubt from the money he made writing about the Holocaust (TM), has lost everything, along with the Wiesel's personal fortune. The victims [sniff]... they are practically countless. It could be close to six million people (just a guess).

Elie Wiesel, the Nazi concentration camp survivor who went on to win the Nobel Peace Prize, showed little inclination this week to make peace with accused swindler Bernie Madoff, whom he called "one of the greatest scoundrels, thieves, liars, criminals."

"Could I forgive him? No," the 80-year-old told a panel assembled Thursday by Conde Nast's Portfolio Magazine at New York's 21 Club to discuss Madoff, whose alleged victims included Wiesel and his foundation, The Elie Wiesel Foundation for Humanity.

"To forgive, first of all, would mean that he would come on his knees and ask for forgiveness," the Auschwitz survivor said. "He wouldn't do that."

...Wiesel said a wealthy friend who has known Madoff for 50 years introduced them. The two men met twice over dinner, and Wiesel checked with financial experts whom he trusted before investing all of his and his wife's personal money.

Then, once Madoff had gained his trust, Wiesel invested all $15.2 million that his foundation had amassed, he said.

"We thought he was God, we trusted everything in his hands," the Boston University humanities professor said.

Whoa...dude, there's your mistake right there!

Wiesel rejected the suggestion that "affinity fraud," the tendency for people to trust others of similar background, played any role in leaving him vulnerable to Madoff. Both men are Jewish.

"It's not the Jewishness in him, it's the inhumanity in this man who simply believed he can go around depriving people of their livelihoods. What he has done to certain people, it breaks my heart," he said.

Mmm hmm. It's not the Jewishness, it's the inhumanity. Madoff acted like he was god, believing he could go around depriving people of their livelihoods. And even though Elie Wiesel says himself he believed Madoff actually *was* god, that does not justify what Bernie did, because he was supposed to be a GOOD god, and not deprive "certain people." So you see, this has nothing to do with "affinity fraud," because Bernie did not properly display his affinity.

Wiesel said he is planning legal action against Madoff but called for the federal government to bail out charities just as it has bailed out carmakers and banks.

"I think it would be a great gesture that the Obama administration should show, we really think of those who are helpless and who are doing with their money only good things." 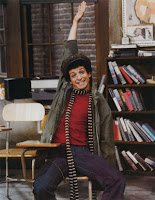 Wiesel offered a punishment he would like to see meted out to the financier, who is under house arrest but has not been indicted.

"But nothing else -- he should not be able to avoid those faces, for years to come. This is only a minimum punishment."

Wow, kind of like imprison him in a sort of Financial Holocaust (TM) Museum! I get it! That's a great idea. No waterboarding or anything, just the torture of listening to his victims complaining incessantly, "Look what you did to me!" You know, that is fucking torture.
Posted by A. Peasant at 7:41 AM

Wiesel checked with financial experts whom he trusted before investing all of his and his wife's personal money.

Either Wiesel was stupid, since no one in their right mind invests ALL of their money in one place or greed overcame his judgement.

Who were those financial "experts" he talked to?

All fellow members of the Tribe?

And he wants a bail out by us taxpayers? Fuck off.
I didn't hear Wiesel whining when he was getting those 20% per annum returns on his money.

They could burn 100 dollar bills to feed the perpetual flame.

yeah ok man
whatever you say

Get back in touch with your buds in the Jewish Internet Defense Forces and see if they can't give you some other material to work with.

Or maybe take a gun and pull the trigger real fast and real hard until something comes out the tip.