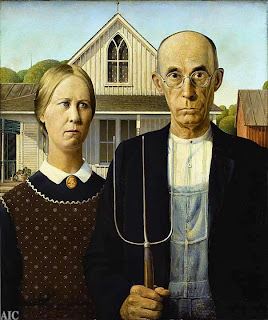 I just stumbled across this while looking into the Sy Hersh/Dick Cheney/Benazir Bhutto story. Click through for the details. (Cross-posted at AA News.)

In July of 1999, the woman with whom I was romantically involved at that time -- call her Gabrielle -- woke up, woke me up, and announced that she had just had an exceptionally vivid dream. A prophetic dream.

Naturally, I wanted to know who would commit such an act. "It won't be who they say it is," she answered.

She mentioned that there would be a war in Iraq as a result, even though Iraq would not be responsible. (She also mentioned Saudi Arabia, but the reference was quite vague. I could not discern how that country figured into this scenario.)

Before continuing, I should fill in some more backstory.

In the mid-1990s, before she met me, Gabrielle had had a series of troubling dreams depicting a "small" nuclear explosion in Chicago. In each dream, she viewed the event from a closer perspective. In one dream, she saw it from the point of view of a reporter flying in a commercial airliner not far from the event.

Naturally, I wanted to know if the New York event was connected with the nuclear event in Chicago. Yes, she said. In a way. But the explosion in Chicago would happen later.

Would the same people be responsible for both events, I asked?

Not really, she answered, although the events are linked. In both cases, she emphasized, "it won't be who they say it is."

"Yes and no. It's like people from the government are involved. Or at least they know about it."

She said that the public would be told that Iran was responsible for the Chicago event. "After that, it's World War Three."

She intimated that things would not play out the way "they" planned, and that the war would spin out of all control.

I asked for more details about the "small" nuclear event in Chicago. She mentioned the Sears tower.

Water played a role in the scenario she envisioned; the device would be transported via boat. I reminded her that Chicago is on one of the Great Lakes. (For some reason, I couldn't remember which one!) She said that the boat would not be on a lake. "You know those movable bridges?" she asked. One of those bridges had something to do with the event.

"You know that picture of the farmer and his wife?" she asked. I took this as a reference to Grant Wood's American Gothic, which I once saw on loan in San Francisco. (Incidentally, the woman in the painting is actually the man's sister.) I vaguely recalled that the work's "home" is in Chicago. She felt that the painting would be destroyed by the blast, and that we would subsequently see the image reproduced ad infinitum in news accounts.

(One doesn't need ESP to foresee how the lost work would take on symbolic, even propagandistic, value.)

Since her unusual trance-like state might never occur again, I attempted to pinpoint a date for these events. She could give neither year nor month, although she insisted that the Chicago event would occur after the fall of the skyscrapers in New York City. (She did not intimate how long after; for some reason, I came under the impression that the two events would occur within fairly quick order.)

"When the bomb goes off in Chicago, do you see snow?" She didn't. It won't happen in the winter.

Update: I wonder if she meant bridges like this. 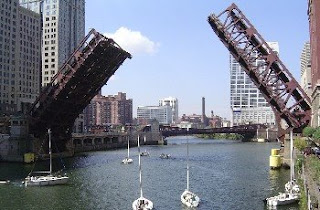 Each spring and fall, Chicago's movable bridges are raised to allow recreational boats to travel to and from the Lake Michigan harbors.

Each bridge lift lasts an average of 8-12 minutes.

Federal law mandates that the bridges open for boat traffic, and CDOT coordinates the bridge lifts with local boatyards to create a schedule that minimizes the impact on street traffic.

OK does anyone else find this totally creepy?

A few other interesting items about this scenario which get my Illuminati sensors twitching...

The building consists of nine framed tubes, which are actually nine skyscrapers on themselves taken together into one building. Originally, the plan included no less than 15 tubes, but when the planned hotel was taken out of the project, only nine tubes were used in the final designs. The nine tubes all reach forty-nine stories. At that point, two tubes end. The other rise up to the sixty-fifth floor. From the sixty-sixth to the ninetieth floor, the tower has the shape of a crucifix. [that's like having a target painted on your back] Two tubes, creating a rectangular, reach the full height of 442 meter (1451ft).

And over at the Art Institute of Chicago, at 111 S. Michigan Avenue:

The exterior of the Art Institute is one of the most photographed landmarks in Chicago. The two huge lions that greet visitors at the entrance to the museum were designed and crafted by sculptor Edward Kemeys in 1894 and attract as much attention today as they did more than a century ago. Founded in 1879 as both a school and museum, the building that originally housed the Art Institute of Chicago was built atop rubble from the great Chicago fire.

These two landmarks appear to be eight or nine blocks apart (map) but along a more or less straight east west line. The Sears Tower is built by the Chicago River and across the river is Union Station, designed by the same architect who designed the Art Institute (Daniel Burnham). And Mr. Burnham had a whole plan for the City of Chicago, and the plan celebrates it's centennial anniversary in 2009. Hmm. Go figure.

Can't you just see the victimization in thier faces?

well indeed i can

I used to work at the Sears Tower in the maintenance department. I spent 4 years exploring every nook and cranny of that place. I've climbed halfway up the antennae, hit baseballs in the sub-sub basement, and jumped from one roof to the other with nothing but a one thousand foot fall beneath me. (88th floor window washing roof) My son may have been conceived...ok TMI, I'll stop there;)

I would just like to point out that sears one one seriously strong building. Yes, it sways a bit on the upper floors during periods of high winds...but if you saw the massive beams that criss-cross every floor in the place, it would be hard to even imagine the structure coming down like the towers did.

I'm glad I left before lucky larry got his hands on it, and rambo took over city hall.
-swits

okokokok swits, don't tell the story about the time you....

you are a daredevil. i don't know anything about steel structures so can't comment on that. however i'm sure that taking down something like the titanic would appeal to them.