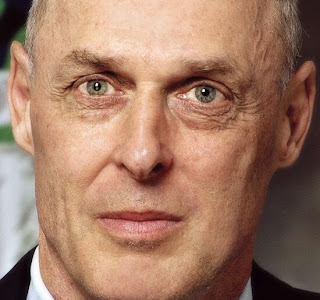 In retrospect, it appears that Paulson was not the callous titan of Wall Street, but rather an earnest, sometimes bewildered man caught in a whirlwind he could not tame or even fully understand. He did the best he could, reaching, sometimes lurching for answers, but in the end he was rescued by the sort of nerdy professor type who might have been devoured on the trading floors of Wall Street. To the extent that there was a hero during those weeks, it was arguably Ben Bernanke, the quiet, shy chairman of the Federal Reserve, whose problem-solving and salesmanship before a skeptical Congress were critical to avoiding financial disaster.

...Yet Paulson can be oddly inarticulate for such a powerful man. He is not a Wall Street smoothie: no trophy wife (he remains married to his college sweetheart), and at Goldman he was known for wearing penny loafers, not handmade Italian shoes. He's an avid bird watcher. A nonsmoking, nondrinking Christian Scientist, he did not head for the Hamptons on the weekend but visited his mother in Barrington, Ill. Yet, physically imposing, radiating a confident forcefulness, he came to stand for the dominating Goldman brand. In the Wall Street hierarchy, Goldman is the smartest and most confident of them all: the firm makes bets, but only ones it feels sure to win.

You see kids, we got it all wrong about these guys. These guys, Ben and Hank, they are the Nicest Guys EVAH, ok? Quiet. Shy. In over their heads. Visiting their mommas and staying loyal to their high school sweethearts.

Look at that face. How can you not feel sorry for him, going through life with a snake eye? Poor thing.

[Regarding a different psychopath...] Notice the transition from arrogant bullying and braggadocio...to abject begging. In my experience, sociopaths are both shameless and prideless – whatever works is their credo. Prideless begging is simply the manipulation he thinks the situation calls for (while bullying was the manipulation called for in other situations). [Like when forcing the Bailout down our throats back in September. - Ed.]

Righto. And if you can get Newsweek to help you, well, then more power to you man. I mean, this is AMERICA.
Posted by A. Peasant at 9:06 AM