A Hue and Cry

In common law, a hue and cry (Latin, hutesium et clamor, "a horn and shouting") is a process by which bystanders are summoned to assist in the apprehension of a criminal who has been witnessed in the act of committing a crime. By the statute of Winchester, 13 Edw. I cc. 1 and 4, (1285) it was provided that anyone, either a constable or a private citizen, who witnessed a crime shall make hue and cry, and that the hue and cry must be kept up against the fleeing criminal from town to town and from county to county, until the felon is apprehended and delivered to the sheriff. All able-bodied men, upon hearing the shouts, were obliged to assist in the pursuit of the criminal, which makes it comparable to the posse comitatus. It was moreover provided that a hundred that failed to give pursuit on the hue and cry would become liable in case of any theft or robbery. Those who raised a hue and cry falsely were themselves guilty of a crime.

In contemporary terms, the hue and cry is also used figuratively to describe the behavior of the news media, seeking a scapegoat for some complex public calamity or instigating moral panics.

Can you imagine the hue and cry that would ensue if, for example, some terrorist incident destroyed an iconic American painting like, let's just say for shits and giggles, American Gothic?

Let's pause here for a moment and imagine that. Think about Charlie Gibson and Brian Ross with their sad eyes, shaking their heads sadly, regrettably, as they report the World News Tonight. Think of Diane Sawyer, her face all magically blurred into wrinkle-free perfection on high def teevee, and think of all the talking heads who deliver "the news." Imagine the graphics and the crawl and the music for their next terrorist production extravaganza.

OK, nevermind. It turns out that the American Gothic painting "lives" at the Art Institute of Chicago. It's totally safe in a beautiful and famous building designed by Daniel Burnham, in a museum under the direction of a Mr. James Cuno. There is NOTHING to worry about. Mr. Cumo has even written books about antiquity. 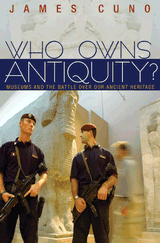 {Hmm. That's an interesting book cover. Ancient Egyptian art guarded by machine gun toting white guys in black uniforms...can't quite make out the patches but they look like private security.}

Cuno argues that nationalistic retention and reclamation policies impede common access to this common heritage and encourage a dubious and dangerous politicization of antiquities--and of culture itself. Antiquities need to be protected from looting but also from nationalistic identity politics. [which are bad, see?] To do this, Cuno calls for measures to broaden rather than restrict international access to antiquities. He advocates restoration of the system under which source countries would share newly discovered artifacts in exchange for archaeological help, and he argues that museums should again be allowed reasonable ways to acquire undocumented antiquities. The first extended defense of the side of museums in the struggle over antiquities, Who Owns Antiquity? is sure to be as important as it is controversial.

"It would be a mistake to see this deeply felt and carefully reasoned argument as self-serving. [or maybe not a mistake] The crux of his argument is that modern nation-states [which are bad bad bad] have at best a tenuous connection with the ancient cultures in question, and their interests are political rather than scientific...Cuno advocates instead a universal, humanistic approach [kind of like a new world order approach] to the world's shared cultural treasures...Cuno's pleas for a more expansive approach to cultural artifacts must be taken seriously."--Publishers Weekly

"The author's message is that stewardship [ie: control], not ownership, is what matters. Trade in antiquities should be dictated not by politics, but by the demands of conservation, knowledge, and access. The argument presented here is thought-provoking. Cuno may be over-optimistic. But you can't help feeling that he is right."--Financial Times [Go ahead, just try and help yourself from feeling that he is right. You can do it because he is wrong.]

Stay tuned. There could be something to worry about after all.
Posted by A. Peasant at 7:30 AM