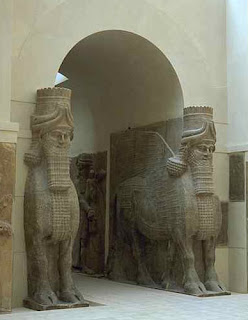 They are winged human headed bulls, a symbol offering protection (via magical powers) against enemies. They were sculpted during the reign of Sargon II to guard one of the gates of his palace, which was excavated (1843, 1928-35) in present day Khorsabad, Iraq, near Mosul.

This information is from the Oriental Institute of the University of Chicago:
http://oi.uchicago.edu/research/projects/kho/

Khorsabad takes its name from a modern Iraqi village that stands on the ruins of an ancient city called Dur-Sharrukin. Dur-Sharrukin ("Fort Sargon") was constructed as a new capital city by the Assyrian king Sargon II shortly after he came to the throne in 721 B.C. The city had not been completed when Sargon died in 705 B.C. His son and successor, Sennacherib, moved the capital to the old established city of Nineveh, about 15 miles to the south, and Dur-Sharrukin appears to have been largely abandoned.

...Early in April of 1929, workmen excavating outside what would later prove to be the throne room of King Sargon II uncovered fragments of a colossal human-headed winged bull. The sculpture had fallen face downward onto the pavement, had then been covered with the debris of the falling building, and was thus perfectly preserved, although broken into a number of pieces. The expedition's field director, Edward Chiera, [newly appointed to the University of Chicago] was uncertain what to do with this new discovery and immediately cabled Breasted:

Breasted promptly cabled Chiera to ask for the piece during the division and to make all necessary arrangements to transport the bull to Chicago, even though he had no money in his budget with which to foot the bill. Pierre Delougaz was placed in charge of the transportation, which proved to be an extremely arduous task.

So the bull went to Chicago, but it seems that it now resides at the Louvre. The antiquities found at Khorsabad went to the following museums: the Iraq National Museum in Baghdad (looted), the Oriental Institute Museum in Chicago, the Louvre in Paris, and the British Museum in London.

Sargon II was one of the first to use numerology in construction.

"Numerology, the science, is based on the understanding that each number has an inherent vibration which provides the key to greater self awareness. This ' vibrational quality ' of each number originated before an alphabet was created! When sounds were originated, they were originally assigned a number as a way of counting - eventually this numbering system was used by the Babylonians: King Sargon II, who ruled Babylonia in the 8th Century BC used the numerical value of his name to determine the length of a wall in the city. Hebrews applied this method to one of their first alphabets. Through this way of applying sound and number they were able to determine that by adding the numeric values of letters and words together they could create values that equaled the 'vibration' or 'quality' of the actual letter or word that was being spoken. This method was eventually named Gematria: "a system for discovering the true and hidden meaning of words, using numbers and letters of the alphabet. The numerical values of the letters of words are added together, and then interpreted according to other words with the same numerical values", from Harper's Encyclopedia of Mystical and Paranormal Experience."

Here is a diagram of the Palace of Sargon at Khorsabad. The lucky charms were at one of the gates, but I don't know which one.


Here's some history about Sargon II:

Sargon II (721-705 BC) was an Assyrian King. He took the throne from Shalmanassar V in 722. It is not sure if he was the son of Tiglatpilesar III or an usurper unrelated to the Royal family. In his inscriptions, he styles himself as a new man, rarely referring to his predecessors, and he took the name 'Sharru-kinu', true king, after Sargon of Akkad, a mighty king who had been found in a wicker basket, a child of a temple prostitute and an unknown father. Sargon is the name given by the bible. Beset by difficulties at the beginning of his rule, Sargon made a pact with the Chaldean Marduk-apla-iddin. He freed all temples, as well as the inhabitants of the towns of Assur and Haran from taxes.

Sargon plundered the fertile lands at the southern and western shore of Lake Urmia, felling orchards and burning the harvest. In the Royal resort of Ulhu the wine-cellar of the Urartian kings were plundered, wine was scooped up like water. The Assyrian host then plundered Sangibuti and marched north to Van without meeting resistance, the people having retreated to their castles or fled into the mountains, having been warned by fire-signals. Sargon claims to have destroyed 430 empty villages. After reaching lake Van, Sargon left Urartu via Uaiaish. In Hubushkia he received the tribute of Nairi. While most of the army returned to Assyria, Sargon went on to sack the Urartian the temple of the god Haldi and his wife Bagbartu at Musasir (Ardini). The loot must have been impressive, its description takes up 50 columns in the letter to Assur.