Some people know how to celebrate an anniversary 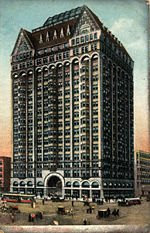 The Ferris wheel was also created for the World Fair in Chicago (1893). It appears to me that the secret societies actually arranged the layouts of the symbolic buildings and symbolic monuments that were used at all World Fairs and the World's Columbian Exposition (another name for the Chicago World's Fair) is no exception. Indeed a bloke named Daniel Hudson Burnham played a big part in the Chicago Exhibition. I don't want to drone on about him, and you can click on his name to know more about him, so I will just say that he built this. (pictured on left, the Masonic Temple Building in Chicago)

Again I have researched World Fairs and please believe me when I say that the trouser leg lifting Freemasons and other sun worshipping liars and conmen had their crafty fingers involved in all of them. 100%. They literally used them to built replica temples and occult monuments and then literally placed them right under the noses of the unknowing sheeple. Just like the Atomium and the Eiffel Tower were in the Brussels and Paris 'World Fairs' respectively, simply has an excuse to build them without any serious questions asked.

I will also say the world fairs were massive events and had the same hypnotic powers as the main stream TV has today. Yes they really were that big an event. It is time to wake up folks or the bastards are going to grind you to dust. Sadly some of you are already salt pot filling material.

Anyway lets move on. We now know the Ferris wheel was created in Chicago by George Washington Gale Ferris Junior after he was selected by Freemason Daniel Burnham to do so. Another fact (or coincidence) is that the Ferris wheel was not only created by a symbolic founding father of the USA 'George Washington' Gale Ferris. It was also created to celebrate the 400th Anniversary of another secret society member Christopher Columbus and also celebrate, wait for it, the 'New World'.

Indeed the Ferris wheel is totally laden with symbolism that is linked to the illuminate and the Serpent Cult. It literally is an obelisk, a benben stone (pyramid), an all seeing eye, the Sun and an acknowledgement of famous secret society members all rolled together in one monument. 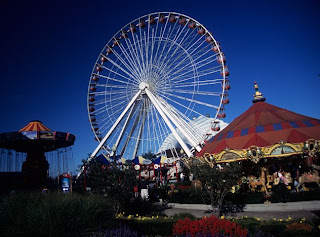 den right under our noses and I believe you would be a fool if you under-estimated its true symbolic meaning and therefore under-estimate its true spiritual power. Again your state education will kick in here and get you to fob the information off.

(Pictured: the current ferris wheel at Navy Pier in Chicago)

Why not? The Ferris wheel was invented in Chicago at the world's fair of 1893, and there's no reason, as pier officials say, that the city can't contribute a new creative chapter to the Ferris wheel tradition.

But it would be better still if the new wheel gets the wheels of creativity turning about the future of the entire pier.

Ever since a Canadian firm's lackluster plan for reinventing the pier was shot down a few years ago, the 3,000 -foot-long lakefront attraction has languished in an urban design netherworld. Chicago architects including Helmut Jahn, Dirk Lohan and Laurence Booth were invited by pier officials to brainstorm its future. But nothing ever came of those meetings.

So the proposed Ferris wheel, which would be at least 300 feet tall (twice as high as the current model), begs the question: Will the new wheel be an isolated, one-shot deal aimed at juicing up interest in the pier or will it form the iconic image of a comprehensive reinvention?

If pier officials answer that question in the right way, they could have a new Millennium Park on their hands. And if they answer the wrong way, they may get the hot new tourist attraction they're after, but they'll blow an opportunity to uplift the public realm.