Please Sir Roy, what do you say?

Some observations on this corruption charge and its deflection, reported in the Daily Mail:

A scientist who advises the Government on swine flu is a paid director of a drugs firm making hundreds of millions of pounds from the pandemic. Professor Sir Roy Anderson sits on the Scientific Advisory Group for Emergencies (Sage), a 20-strong task force drawing up the action plan for the virus. Yet he also holds a £116,000-a-year post on the board of GlaxoSmithKline, the company selling swine flu vaccines and anti-virals to the NHS.

OK, so he's a 1) scientist, 2) an adviser (presumably paid although the Daily Mail story doesn't confirm this important detail) to the UK government on swine flu and 3) a paid director at GlaxoSmithKline. So some people think he should step down from the government adviser role. Seems totally reasonable. You can keep your other two jobs.

Sir Roy faced demands to step down yesterday amid claims that the jobs were incompatible. 'This is a clear conflict of interest and should be of great concern to taxpayers and government officials alike,' said Matthew Elliott of the TaxPayers' Alliance. 'You cannot have the man in charge of medical emergencies having any financial interest in the management of those emergencies. We need someone totally unbiased to tackle this crisis.'

Considering that the Taxpayers' Alliance makes the charge, it seems that the UK government definitely pays Sir Roy to serve on the Sage task force drawing up action plans for the virus. Even if it's a token amount, the real lucre comes from driving the government contracts to GlaxoSmithKline.

The Department of Health and GSK denied there was a conflict and said Sir Roy did not attend Sage meetings where vaccines and drugs were discussed. Sir Roy was appointed to Sage to 'provide cross-government scientific advice regarding the outbreak of swine flu'. He was one of the first UK experts to call the outbreak a pandemic.

So here we see that the Department of Health and GlaxoSmithKline band together to defend Sir Roy on that basis that he sits out the meetings where drugs are discussed. The conclusion the reader shall draw being, presumably, that he has no influence on those decisions. However, in the next breath we learn that he is exceedingly influential. That's why he's on the task force in the first place! And in fact, he was one of the first UK experts to promote the outbreak to a pandemic! Later on in the story we learn more of his amazing, deadly influence:

During the 2001 foot and mouth outbreak, Sir Roy's advice to Tony Blair led to the culling of more than 6 million animals.

Ahh, a powerful man indeed. Theoretically he could stop someone in the hallway after one of these meetings and "advise" them to choose a GSK drug... But listen, he is a man with both scrupulous ethics and impeccable timing!

A spokesman for GSK insisted there was no conflict of interest. 'Professor Anderson stepped down from the government's flu advisory group on appointment to GSK. 'In May, he was asked to rejoin as a temporary member as the scale of the influenza pandemic became evident.

He stepped down from Sage after joining GSK but was asked to rejoin after the scale of the influenza pandemic became evident! And he, of course, as we already learned, was one of the first UK experts to call the outbreak a pandemic, a fact cited to prove his suitability for Sage, which resulting pandemic thereby facilitated his being asked to rejoin Sage. But since he very properly resigned first, it's all good. See?

And all this other business about him making money hand over fist and wrecking people's careers and having conflicts of interest, well, what of it? This is how it goes for people who have connections. All working stiffs understand that people like Sir Roy have natural good luck in their business affairs, which they deserve for being so extra-intelligent and hard-working in the first place.

During an interview for Radio Four's Today programme on May 1, he praised the anti-flu drugs and called for their distribution. Listeners were not told he was paid by GSK. The West London-based drugs giant has had to defend itself from allegations of profiteering from swine flu after posting profits of £2.1billion in the last three months. Sales of the company's Relenza inhaler, an alternative to Tamiflu used by pregnant women among others, are expected to top £600million. This figure could be boosted by up to £2billion once deliveries of the firm's swine-flu vaccine begin in September. Sir Roy, 61, who was unavailable for comment yesterday, earned £116,000 at GSK last year, at least a quarter of which he received in shares. GSK's share price has risen 10 per cent since May from about 1,060p to more than 1,160p.

Jobs? This guy finds great paying jobs lying all over the place. If he messes one up, a better one will surely be just around the corner.

The previous year at Oxford University, Sir Roy was at the centre of controversy after claiming a female colleague had slept with her boss before getting a job. He was forced to apologise and pay compensation. A university inquiry in the wake of the scandal found that he was in breach of rules by failing to disclose his business interests as director and shareholder of International Biomedical and Health Sciences Consortium - an Oxford-based biomedical consultancy, which had awarded grants to his research centre. Sir Roy was forced to resign, although his career soon recovered. He moved to Imperial College within months, was made the Ministry of Defence's chief scientist and, last year, took over as Rector of Imperial College, London where he earns up to £400,000 a year.

Here's his picture. Such an expression, so sad like Tiny Tim with no Christmas goose. I think Sir Roy has practiced this expression in the mirror many times. But if you look closely, around the eyebrows, the eyes that dead stare, the hint of a smirk around the mouth, you can see him laughing all the way to the bank. 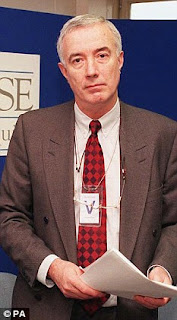