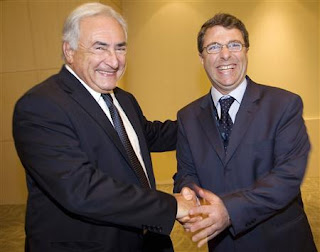 Wow those guys look like they won the lottery, huh?

The IMF and World Bank are meeting in Istanbul, Turkey from October 4-7.

ISTANBUL (Reuters) - The Group of 24 nations on Saturday called for a significant shift in IMF voting power to developing nations and a doubling of members' quotas to raise more resources for the global financial institution.

The G24, which includes emerging and developing countries from Latin America, Africa, the Middle East and Asia, called for a "political commitment" to shift 7 percent of quota shares from rich to developing countries. That is larger than the 5 percent shift announced by Group of 20 major nations in Pittsburgh last week ahead of a January 2011 target for overhauling the voting system of the IMF, which has long been dominated by Europe and the United States.

The G24 also called for a seat at the G20 to make it more representative of developing countries. Most of the G24 countries, such as Iran, Nigeria, Colombia and the Philippines, are not G20 members.

"The redistribution of quotas must not be at the expense of other developing countries and must be based on a reformed quota formula which addresses the present deficiencies and bias against developing countries, including inadequate reflection of the potential need for Fund resources," the G24 said in a communique before IMF and World Bank meetings in Istanbul.

The G24 has been vocal about the need for a major rebalancing of IMF voting power to reflect the rise of emerging market countries in the world economy.

The G24's call for a doubling of IMF members' quotas, which determines their voting power in the Fund, mirrored a speech by IMF Managing Director Dominique Strauss-Kahn on Friday in which he called for a further increase in IMF resources that would allow it to become a "credible" global lender of last resort.

The IMF received a $500 billion boost in its resources in April but emerging market countries China, Brazil and Russia have made it clear their contribution is not permanent unless they are given a greater say in the institution and also in how the funds are used.

Amar Bhattacharya, director of the G24 Secretariat, said more resources for the IMF would also discourage nations from trying to self-insure by accumulating large currency reserves. [LIKE for example:] Asian countries have been wary of the IMF's handling of the region's financial crisis in the 1990's and have amassed trillions of dollars in savings to avoid ever going back to the IMF.

The G24 also said the threat of a deep and prolonged global recession appears to be receding. But it noted the crisis had exacted a heavy toll on developing countries and called on the IMF to pay closer attention to advanced economies, which were at the center of the crisis and have often ignored the Fund's advice.

"In this connection surveillance of systemically important countries should be even handed and more effective," G24 chairman Adib Mayaleh, who is also Syria's central bank governor.

[oh by the way:] The G24 also called for an expanded role for IMF Special Drawing Rights, the fund's internal unit of account, in the international monetary system.

Sounds like some smaller countries are banding together and throwing their weight around against some bigger countries, and this is good with Mr. Dominique Strauss-Kahn. He seems very happy about this. He looks so happy, doesn't he?

And those SDRs? Never heard of them? Me either. But Ellen Brown knows what they are.

The IMF may have catapulted to a more exalted status than that. According to Jim Rickards, director of market intelligence for scientific consulting firm Omnis, the unannounced purpose of last week’s G20 Summit in Pittsburgh was that “the IMF is being anointed as the global central bank.” In a CNBC interview on September 25, Rickards said, “They’ve issued debt for the first time in history. They’re issuing SDRs. The last SDRs came out around 1980 or ’81, $30 billion. Now they’re issuing $300 billion. When I say issuing, it’s printing money; there’s nothing behind these SDRs.”

OK, so, no wonder he looks so happy. If I understand, and I'm not saying I do, the IMF has just become what the Fed is, except for the whole world. Which means Mr. Strauss-Kahn is now Ben Bernanke on steroids.

The Fed, which is owned by a consortium of banks and was set up to serve their interests, is tasked with seeing that the banks are paid back; and the only way to do that is to inflate the money supply to create the dollars to cover the missing interest. But that means diluting the value of the dollar, which imposes a stealth tax on the citizenry; and the money supply is inflated by making more loans, which adds to the debt and interest burden that the inflated money supply was supposed to relieve. The banking system is basically a pyramid scheme, which can be kept going only by continually creating more debt.

And that brings us back to the IMF’s stimulus package discussed last week by Professor Buckley. The $500 billion package was billed as helping emerging nations hard hit by the global credit crisis, but Buckley said that he doubts that is what is really going on. Rather, the $500 billion pledged by the G20 nations is “a stimulus package for the rich countries’ banks.”

Why does he think that? Because stimulus packages are usually grants. The money coming from the IMF will be extended in the form of loans.

...The IMF is back in business, but it’s the old unseemly business of serving as the collection agency for the international banking industry. As long as third world debtors can service their loans by paying the interest on them, the banks can count the loans as “assets” on their books, allowing them to keep their pyramid scheme going by inflating the global money supply with yet more loans. It’s all for the greater good of the banks and their affiliated multinational corporations, funded with $500 billion from the taxpayers of the G20 nations.

"The United States would be mistaken to take for granted the dollar's place as the world's predominant reserve currency," he said. "Looking forward, there will increasingly be other options."

That's what I said, booty-traps.

The Geneva-based UN Conference on Trade and Development (UNCTAD) called for a global currency in a report made public on September 7. UN countries should agree on a global reserve bank to issue the currency and to monitor the national exchange rates of its members, UNCTAD said. The dollar’s role in international trade should be reduced to protect emerging markets from the “confidence game” of financial speculation, it said.

Heiner Flassbeck, a former German deputy finance minister, is co-author of the report calling for a global currency. He worked with then U.S. Deputy Treasury Secretary Lawrence Summers in 1997-98 to contain the Asian financial crisis. Summers is a longtime Bilderberg luminary and has been photographed by AFP at annual secret Bilderberg confabs.

Eliminating national currencies has long been a goal of Bilderberg as a crucial step in its plan to establish a world government. A nation’s currency is a symbol of sovereignty, so Bilderberg wants to divide the world into three giant regions, each with its regional currency, for the administrative convenience of its world government bureaucrats.

Amar Bhattacharya, director of the G24 Secretariat, said more resources for the IMF would also discourage nations from trying to self-insure by accumulating large currency reserves. [LIKE for example:] Asian countries have been wary of the IMF's handling of the region's financial crisis in the 1990's and have amassed trillions of dollars in savings to avoid ever going back to the IMF.

I see. The Asian countries would like "to avoid ever going back to the IMF," after receiving help in the 1990s from people like Lawrence Summers, a longtime Bilderberg luminary, so they have accumulated large currency reserves -- ie: savings, so that they don't have to borrow from the HELLHOLE IMF -- and the new changes celebrated by Mr. Strauss-Kahn will discourage this sort of self-preservation type-activity.

And Mr. Zoellick, humanitarian* that he is, had this to say on the eve of the G20 summit:

"If leaders are serious about creating new global responsibilities or governance, let them start by modernising multilateralism to empower the WTO, the IMF, and the World Bank Group to monitor national policies," Zoellick said. "Bringing sunlight to national decision-making [ie: DESTROYING NATIONAL SOVEREIGNTY] would contribute to transparency, accountability, and consistency across national policies." [Indeed.]

* "Zoellick, former Executive Vice President of Fannie Mae and advisor to Goldman Sachs, is a top elitist who was intimately involved in the Enron scandal and the 2000 presidential election debacle. He was also a signatory to the Project For A New American century document that called for invading Iraq as part of implementing a brutal world empire in 1998. He was later a foreign policy advisor to George W. Bush. As to be expected, Zoellick is a member of the Council on Foreign Relations and the Trilateral Commission. He also attended the annual invitation-only conferences of the Bilderberg Group in 1991, 2003, 2006 and 2007."

And, just to make things extra-confusing, Iran did the following, which would presumably endear them to people like Mr. Zoellick and Mr. Strauss-Kahn:

Iran’s President Mahmoud Ahmadinejad has ordered the replacement of the US dollar by the euro in the country’s foreign exchange accounts. The September 12 edict was issued following a decision by the trustees of the country’s foreign reserves, Mehr News Agency reported. Earlier, the Islamic Republic of Iran had announced that the euro would replace the greenback in the country’s oil transactions. Iran has called on other OPEC members to ditch the sinking dollar in favor of the more credible euro. Following the switch, the interest rate for the facilities provided from the Foreign Exchange Reserves will be reduced from12 to 5 percent. Since being introduced by the European Union, the euro has gained popularity internationally and there are now more euros in circulation than the dollar. The move will also help decouple Iran from the US banking system.

Or maybe I misunderstand. I do that sometimes.
Posted by A. Peasant at 11:14 AM

When you can't install and prop up a tyrannt or tell a pack of lies to invade, you just implode the country from within thru economic warfare.

More transparency with the IWTFMF? The same kind we get with the Fed?

Economic slaves from the time your born till the day you die.


At least indentured serfs in the Dark Ages only had to work seven years before being freed.

ha, you know things are bad when the dark ages seem fairer.