stand back a little to see the big picture 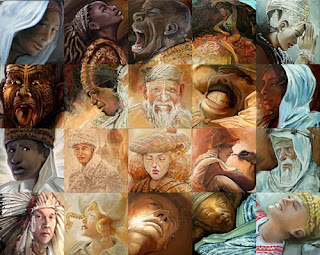 Expanding on organized corruption, it seems clear that for all kinds of illegal, international trafficking to work (humans, drugs, weapons, etc.), there must be corruption in customs offices and transit points like airports, airport security and things like that.

Notice how in Lolita's transit from Nigeria to London, with three terrified small boys picked up en route, all the paperwork had been pre-arranged:

In a matter of three months, I had every single paper needed to leave for London. He also gave me the names of persons I had to meet and everything went well. I also had to go to Benin City (a city in Nigeria, ndlr) to collect a small parcel for him. I was a bit taken aback when I realized that the little parcel he was talking about were three young boys between the ages of eight and twelve. Their passports and visas were ready. Everything was ok. I went to see a guy called “wizard” for instructions. Our trip took us through Ghana where someone provided us with Liberian passports with which we traveled to London. This was to help us obtain refugee status with ease. We left after spending three days in a shantytown in Accra where we were hidden to “avoid being spotted by jealous people who were not as lucky as us!”...At the airport, my fiancé and the person who was to collect the children were waiting. The separation was very painful. A lot of force was needed to tear the little boy from me. I never heard of those children again.

The wealthy man who 'purchased' Lolita moved her through the process without difficulty, he had everything pre-arranged. Apparently nobody intervened at the airport during what must have been a scene as they tore the terrified little boy away from her. What do people do when witnessing scenes in public? They don't get involved. Why? Well for one thing they assume that the authorities will step in and handle anything suspicious. And for another thing they are afraid to get involved. This mind-control over-rides the human impulse to stop, inquire and help. We stop and stare, but then we think about our own self-preservation. We don't know what's going on, we've heard so many horror stories, etc. So we mentally transfer the responsibility to help over to "the authorities," who are trained in these matters, and then we leave. After all, we have been assured that the authorities follow up on all suspicious behavior, right? Indeed, this has been drilled into our heads. Over in the UK they are well advanced in proactively criminalizing the entire society.

New figures from the Justice Department show that an increasing number of people is being criminalised, principally the over-40s who have never been in trouble with the police and have never really done anything wrong apart from breaking the speed limit occasionally. The number of over-40s receiving a first conviction or caution has increased by half since 2001 and is now running at 65 a day. The figures reflect the fact that many of Labour’s new spot fines for ''crimes’’ such as overfilling a wheelie bin are aimed at householders.

And here in the homeland we have plenty of people tasered to death for doing nothing much. We know that interfacing with authorities is not advised, so we don't. It's best not to interfere. I would say that conditioning has been very effective, and perhaps -- in the long view -- the crazy laws were enacted specifically for this purpose, along with the drip of media reports about people getting caught up in Kafkaesque circumstances with the legal system. The Cato Institute even has a book about it called Go Directly to Jail: The Criminalization of Almost Everything, in which smart think-tank people lament the burgeoning criminal code and the byzantine criminal justice system! It's the tough-on-crime conservatives they say, and it's the anti-big-business liberals too. All these individual components have grown and morphed, surely by accident, into something monstrous. Oh dear. Let's write a book about it for our CV.

But hey, come one. Who brought us this system in the first place? People from think tanks. This stuff doesn't happen by accident. It's a big pattern, a long trend. Stand back a little and look at it from a distance. It's amazing no, how the thing holds together, as if created by an artist of some genious?

The situation thus created makes a nice thick buffer zone between the authorities and the society of normal people. Normal people assume, logically, that since the authorities seem to be hyper-alert to potential criminals and terrorists, ready to whip their tasers and assault weapons out at the slightest provocation, surely nobody can get away with anything. And yet, what appears to be happening is that the authorities -- some of them -- use your logical assumptions and your fear of approaching them, assumptions which have been carefully planted and nurtured through the media, to openly facilitate crime such as human trafficking in broad daylight.
Posted by A. Peasant at 2:47 PM