the situation needs to be put into context 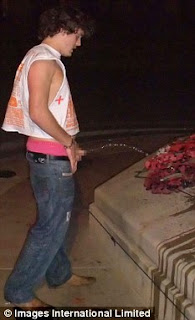 caption: Philip Laing could face jail for urinating on a city centre war memorial while taking part in a Carnage UK event

Several universities have banned the company that promotes student pub crawls after 19-year-old Philip Laing was pictured urinating on a war memorial during one of their events.

...Laing was last week told that he could face jail by a judge after he pleaded guilty to outraging public decency.

But he also held the organisation itself to account.

Judge Browne said Carnage should be up in the dock alongside the sports technology student.

'Carnage is the name of the organisation I believe promotes this activity, and some might say somebody [from the company] should be standing alongside you this morning,' he said.

Another case of amazing success, kind of like these precocious guys.

His father is an insurance executive and his mother is a midwife. Mr Bahia, whose real name is Inderpaul Sandeep Singh Bahia, began with an event in Liverpool six years ago, [when he was just 23 - ed.] and launched Carnage UK just over two years ago.

His firm now runs events in every university town and city in Britain, involving around 350,000 students a year.

To participate, students pay a nominal fee – around £8 – for a branded T-shirt which guarantees them entry to a succession of bars and pubs. The shirt features a checklist of ‘challenges’ to be completed, generally involving sexual behaviour. Mr Bahia has refuted previous suggestions that the organisation promotes “binge” drinking saying: “Our events are heavily focused on group identity, social and ethical cohesion and fancy dress themes.”

"Group identity, social and ethical cohesion and fancy dress themes" being, evidently, a euphemistic way of saying, "Dress and act like a whore. Here you might need a drink."

...During a recent Carnage UK event in Guildford, Surrey, groups of students descended on bars and clubs, wearing little else other than t-shirts and underwear. There were similar scenes at the event in Norwich....Critics have said the events are a "cynical commercialisation" of the youth binge-drinking problem.

But before you click through to the Carnage site, remember this? 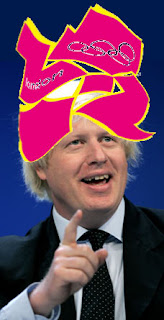 The controversial 2012 Olympics logo ran into more trouble today as it emerged that a video promoting it had triggered migraines and epileptic fits. The IOC is also now set to investigate the logo and politicians say it's childish and looks 'like Boris Johnson's hair'. Epilepsy Action said it had received reports of 22 people having fits while watching the video, with reports of others vomiting and having migraines.


If you want to see the Carnage site, it's at www.carnageuk.com. But I wouldn't recommend clicking through if you have epilepsy or are prone to headaches. Nobody has complained, of course, but I felt a headache come on almost immediately. Colors, flashing, chaos, body parts...oh and the photo gallery is "undergoing maintenance." (wink wink wink)

A BLONDE girl wearing knickers and high heels totters across a litter-strewn street. She and her mates - some of them sporting devil horns and smeared make-up - have been knocking back vodka-based "shooters" in a string of pubs and bars.

...At the Leicester event, which also attracts students from nearby Loughborough, we see youngsters falling down drunk, hunched in the gutter and sprawled on the pavement. Others struggle to stay upright as they barrel from bar to bar. Girls snog strangers in the street. Men and women grope each other in full public view.

Carnage UK is a commercial company which makes a profit from these organised bar crawls. The Sun paid £8 for a T-shirt which granted our reporter entry to seven bars where revellers then pay for their drinks. Among the students there is a contest to write the crudest slogans on each other's bodies and T-shirts. One girl has the word "Enter" scrawled just above her knicker line with an arrow pointing downwards. Another proudly has the words: "I'll **** you any way you want" emblazoned on her back.

Meanwhile, printed on the back of the T-shirts is a list of sleazy challenges which the students egg each other on to carry out. Each one has a box next to it which is ticked when the task is completed. Every Carnage night has different tasks, but at the Leicester bash - to celebrate Halloween - revellers are challenged to "Same-sex snog time", "Meet with a bad devil", "Get spanked by a naughty angel" and "Get a devil's love bite".

The list of bars on the route is also on the shirt, complete with more tick boxes. And on the front is a warning that NUS and student cards will be needed at every bar to get in. In fact our reporter is asked to show an NUS card only once, at the Zanzibar.

It's just an organized pub crawl so the kids can have fun, see? The t-shirts simply tell the young people where to go and what to do, and gives them free entry to the bars listed.

"Our events are heavily focused on group identity and social and ethnic cohesion. We are not irresponsible or promoting binge-drinking."

...In each bar, marshals dressed in orange bibs provided by Carnage oversee the mayhem. One tells us: "Our job is to hold their hair out of their sick and make sure they don't fall under a car." The onslaught of 2,000 students overruns the city centre, and most regular drinkers retreat as soon as the Carnage T-shirts appear.

...One student, 19-year-old Jenny, brags: "We basically own the city on Carnage nights. This is what university is all about - getting smashed and having a good time. "What is the point in working when you can have fun and not have to worry about paying back the loan for years?"

Another, called Carl and speaking in a Midlands accent, says: "I couldn't give a **** what I end up going home with tonight.

...The violence is fuelled by cheap drinks such as double vodka Red Bulls for £3, and vodka shooters for £1.50. Bar staff walk around offering test tube shots which the students guzzle down. At 2am the final club closes, churning hundreds of drunken students into the street. They swell into the pedestrianised centre and cram into kebab shops. It is 3.30am before they completely disperse. All that is left hanging over the centre of Leicester is the smell of urine and vomit.

Last night a spokesman for Varsity Leisure Group said: "Carnage UK events are carefully planned, organized and managed. We communicate from an early stage with police to ensure events run smoothly. We do not promote binge- drinking and request participating venues supply free soft drinks. None of the tasks necessitate the consumption of alcohol whatsoever."

No no of course not. He's not being disingenuous at all.

Anyway, it's all Philip Laing's fault for peeing on the poppies.

Carnage has been under fire in the media after a student taking part in one of its organised events was caught urinating on a wreath of poppies at a war memorial. Philip Laing appeared in front of Sheffield Magistrates' Court this week where District Judge Anthony Browne warned him a prison term remained under consideration.

Speaking to PRWeek, Varsity press officer Steven Hughes said: ‘A lot of the media coverage has been unfair. The situation needs to be put into context. TWo thousand students were taking part in the event that night, and this was just one individual.'

He added: ‘We are very frustrated. While Philip committed a despicable act, he did it off his own back and is personally accountable. We have in place secure measures to ensure the safety of the students taking part. Philip bought and consumed a bottle of whisky prior to joining the event. We cannot chaperone everyone before they take part in our events.'

Aha! Personal responsibility, fairness, putting things into perspective, people doing things on their own time, blah blah blah. This was ONE student at ONE event, and we shouldn't be making judgments based on this ONE INCIDENT, unfortunate as it was to have been caught in a photograph. Well even that's not such a big deal except that the photograph got into the newspapers.

If they like customers who 'dress and act like whores,' they should have a field day in DC.

Alcohol, the drug the government endorses and has made legal, as opposed to marijuana, possession of same can get you tossed in prison.

Major Hasan, mass murder and terrorist? Greenwald has some interesting discussion about the definition of terrorist for Hasan today that you might be interested in.

As for college age binge drinking, we can't continue to allow kids to chemically enhance their experiences which may allow them to grow intellectually beyond the boundaries established by TPTB. Drinking makes you bad.

Conform publicly or risk becoming the one we ostracize.

people like david brooks and paul bahia lead other people into the pit for money.