these guys get around 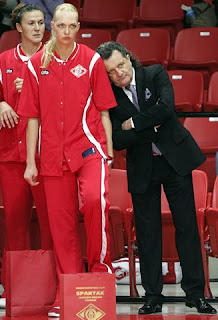 This is what a double agent spy looks like (it's the short one).

Kalmanovich watching his Spartak team play in a 2006 Euroleauge match.

MOSCOW — Shabtai Kalmanovich, a patron of the arts and sports, a wealthy businessman and a double agent who worked for the KGB and Israel’s Shin Bet, was laid to rest at a cemetery in Petakh Tikva, near Tel Aviv, on Thursday.

Kalmanovich, 60, was gunned down in central Moscow last Monday in an apparent contract hit that authorities said might be connected to a debt deal gone bad or an ongoing gangster turf war.

Laid to rest in Israel. I guess that puts to rest any confusion about his true loyalties.

A sports promoter, a show business producer and a spy for Soviet intelligence, [???] Kalmanovich had the reputation of a smooth operator and was a friend to many people, from comedians to politicians.

...Unknown gunmen opened fire on Kalmanovich’s Mercedes from a passing silver Lada on Monday on Krasnopresnenskaya Naberezhnaya. Kalmanovich, who was heading to a business meeting, was hit 10 times and died on the spot.

...Law enforcement officials said the death might be linked to a gangland war that broke out after notorious gangster Vyacheslav Ivankov died last month of injuries sustained in a July shooting. Kalmanovich was a friend of Ivankov and supported his attempts to dominate rival gangs, national media reported this week.

“I want you to know that I am proud and always will be proud of being your daughter,” his daughter, Liat, said in her eulogy, Israel’s Ynetnews agency reported. “You did not put me to shame. You were a spirited Jew and an ardent Zionist.”

...In 1988, he was arrested in Israel on charges of spying for the Soviet Union and spent five years in prison. Kalmanovich repeatedly said in interviews that he was not ashamed of working for Soviet intelligence but that he had been “brainwashed” by Soviet propaganda into offering his services.

...Kalmanovich returned to Russia in 1993 after receiving a pardon from Israeli President Chaim Herzog on medical reasons. [brainwashing fixed and reversed?! time to atone?? - ed.]

Kalmanovich said he made most of his money in South Africa, where he had befriended Kgosi Lucas Manyane Mangope, the ruler of Bophuthatswana, a black homeland that apartheid-era South Africa recognized as a sovereign nation but the rest of the world viewed as a puppet state.

...The Russian Basketball Federation — whose board includes Russian Technologies head Sergei Chemezov and Federal Customs Service chief Andrei Belyaninov, both former KGB officers — praised Kalmanovich on its web site as the person “connected with the recent successes of female basketball.”

Now about his friend Ivankov:

Vyacheslav Ivankov -- aka "Little Japanese" -- was leaving the Thai Elephant in Moscow in July when a sniper shot him three times in the stomach. The 69-year-old Russian Mafia boss spent months in the hospital before succumbing to his wounds last week. ...Police believe he was murdered for trying to settle a beef between two warring Moscow crime factions.

During his career, Ivankov specialized in gun-running, racketeering, drug trafficking and extortion, both in Russia and the U.S. He spent 11 years in a Russian prison on a robbery conviction in 1980. A year after he was released in 1991, he moved to America -- but didn't end his criminal ways...Police say he preyed upon fellow Russian immigrants in the Brighton Beach section of New York, and helped divvy up the U.S. into autonomous turfs to avoid conflict.

...Police believe he died after trying to settle a dispute between rival factions run by Tariel Oniani and Aslan Usoyan. Ivankov supposedly backed Usoyan, which left Oniani inclined to shoot someone.

Preying upon his fellow Russian immigrants? I guess his loyalties rested elsewhere (cough).

OK, moving on. This is the guy left standing so far in this gangter war: Tariel Oniani. (links removed, click through for links and full details)

By "Hollander" (Hollander is the nickname of a poster to the Mobbed Up forum)
Posted on March 6, 2009 Copyright © www.gangstersinc.nl

In July last year Russian police used a dramatic helicopter raid to detain dozens of reputed crime bosses known as “thieves-in-law,” gathered on a yacht at a reservoir outside Moscow. ..Most of the more than three dozen suspected gang leaders detained in the raid were later released because of a lack of evidence. Among those detained, according to media reports, was Tariel Oniani, an ethnic Georgian with a reputation as one of the most powerful crime bosses in the Soviet Union.

Some speculated that Tariel Oniani, had organized the meeting to discuss a conflict with a rival crime boss, Aslan Usoyan. ... Usoyan gathered his supporters, including Vyacheslav Ivankov, known as Yaponchik, for a May 2 meeting in Krasnodar, newspaper Kommersant reported. ...Authorities have accused them [the 'thieves-in-law'] of ordering contract killings and carrying out kidnappings and innumerable financial crimes.

...An influential “thief-in-law” in the Moscow of the 1980s, he moved to Paris in the 1990s and later to Spain, when criminal charges were brought against him in France. He ran a construction business on the Mediterranean coast, apparently employing an illegal Georgian work force and investing in real estate for money-laundering purposes. After the police failed to arrest Oniani in Spain in the summer of 2005, an international warrant was issued against him. The Spanish police undertook a large-scale operation but he managed to escape. They conducted some 50 searches in Barcelona, Alicante, and at the resorts of Marbella and Torremolinos where offices of Tariel Oniani’s companies were situated. In September of 2005, hardly three months after the operation, intelligence services were alerted that Oriani had issued an order to assassinate the ones in charge of the investigation, the judge and the public prosecutor. (Some background information on the Spanish angle here. - ed.)

Months later, in May, Oniani’s business partner Zakhar Knyazevich Kalashov, the man considered to be the leader of the Russian mafia in Spain, was arrested in Dubai. Knyazevich well known as Shakro Junior arrived on the Costa Blanca at the end of the 1990s, then later spent time on the Costa del Sol and in Cataluña. The criminals had established a network of bars and restaurant chains on Spain's Mediterranean coast, and also trafficked luxury cars to launder money from criminal activities in the former Soviet Union. Knyazevich who was brought back onto Spanish soil on board a military aircraft, fled Spain, when 28 members of his organisation were arrested, and 800 bank accounts were frozen. Several international arrest warrants have been issued for the man linked to killings and drug trafficking. In november 2006 Spanish police arrested nine other gang members including Ukrainian national Oleg Vorontsov, a former advisor to ex-president Boris Yeltsin, who led the crime ring after the arrest of Knyazevich.

...In the last 15 years the thieves-in-law have spread around the world, from Moscow to Madrid to Berlin and Brooklyn. They are involved in everything from petty theft to billion-dollar money laundering schemes, while also acting as unofficial jurists among conflicting Russian criminal factions. When the Soviet Union fell, they emerged from the broken country’s peripheries to exploit the legal chaos. By all accounts, they infiltrated the top political and economic circles.

Infiltrated? Invited to up the numbers and spread confusion. Remember all the Russian gold went pooph!!! when the USSR went belly up.

yup and where is it all now?

Have they audited Fort Knox lately? Are our politicians capable of anything other than yes sir Mr. Benny?

good questions. i think no and no.

Sometimes there is some good news!


Desiree Jennings is the 26 year old cheerleader and marathon runner was who severely crippled with a neurological disorder diagnosed as dystonia in the wake of taking the seasonal Flu vaccine (that government officials and pharmaceutical shills keep telling us is "safe").


Don Nicoloff mentioned to me on the phone tonight that he heard an audio clip from a radio show in which Dr Rashid Buttar of Huntersville, North Carolina, the physician who helped Desiree detoxify her body of the POISONS given to her when she got vaccinated with the saving Swine flu vaccine, explain how he applied intravenous solutions including chelating agents, anti-oxidants, nutritional support, and NATURE-BASED anti-viral compounds over a period of 36 hours which resulted in a stunning and amazing turnaround for Desiree from the seizures she was experiencing nearly EVERY MINUTE, with no ability to talk, and unable to breathe for 10 or 15 second intervals when first carried into his clinic.


You can hear the entire story from Dr Buttar himself in this radio show interview with Robert Scott Bell On October 25, 2009

hey dub, that's great news. i only hope that Desiree will not be exploited by the people who helped her.

I don't think so the doctor sounded pretty down to earth he said she would have died if they had not carried her in when they did she wasn't breathing for 30 seconds at a time.

He also mentioned those who said it was incurable and psychosomatic should be examined themselves.

I may have to go to word press it is getting to where I can't comment on blogs and post. Must be my new pic on the front page.