turning the screws in Colorado

Several companies did very well in the latest Iraq oil auction, especially Russia and China. American companies...not so much.

A Petronas-Shell alliance got the highly coveted Majnoon (reserves of more than 12 billion barrels, projected output of 1.8 million bpd), near the Iranian border. Russia's Lukoil (85%), with junior partner Statoil (15%), got phase 2 of the immense West Qurna (located 65 kilometers northwest of Basra; about 12 billion barrels of reserves; projected production of 1.8 million bpd) - which in theory it had already bagged under Saddam Hussein. When Lukoil was stripped of its contract by Saddam, it blamed US-instigated United Nations sanctions, while Saddam blamed Lukoil itself.

...What the early 2010s will definitely see is the rise of a relatively wealthy, Shi'ite-controlled Iraq friendly with Iran and Lebanon's Hezbollah. Essentially, Shi'ite Islam on the rise. The US-friendly autocracies and dictatorships in the Gulf will cry again, "It's the return of the Shi'ite crescent!" United States think-tanks may be tempted to define Maliki as the new Saddam. The only difference is that by then, Cheney and company will be safely ensconced in the dustbin of history.

So, you know, people can debate whether the new power configuration in Iraq is an accident, but power configurations don't happen by accident. They might look like accidents, but that means accidentally on purpose, in order to gas up the tank on the Hegelian Mindfuck Endless Conflict for Fun and Profit bus for another World Tour.

And so what if Dick Cheney doesn't like it? That doesn't mean somebody else isn't loving it and planning to make a bloody fortune. These people are cut-throats and Dick had his turn, he's out of power, and he can try as he might to throw his weight around still or maybe he should just go be his cold-blooded retired reptile self back in Wyoming and enjoy, if that's the word, whatever life he has left, laying around on a stone wall or something, while his enemies fuck with the people of the world. Like I said, they take turns and his turn ended.

Speaking of people making bloody fortunes...this Lukoil might be worth watching as it connects back to some other topics of interest like oligarchs, diamonds, and Colorado. Yup! More Intersecting Circles. I'm sure Lev Leviev must be around here somepl 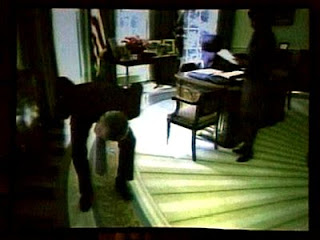 Jul 23, 2009 (MENA News from Al-Bawaba via COMTEX) -- Court documents and testimony, presented recently in the Colorado District Court in Denver, expose substantial new evidence that LUKoil has operated a significant business in the state.

The new evidence, secret until now, stretches back for ten years, and shows a flow of cash every month from an alleged front company in Colorado to a LUKoil company in Israel.

The evidence reinforces the likelihood that LUKoil and its Russian subsidiary, Arkhangelskgeoldobycha (AGD), will be ordered to face trial on charges of defrauding Archangel Diamond Corporation (ADC) of its rights to develop the Grib diamond mine project.

In addition to its stake in the future Grib diamond mine project, ADC's biggest current asset is its US lawsuit against LUKoil. This claims recovery of $30 million in investment, $400 million in ADC's share of profits, and another $800 million in potential profits.

The newly disclosed evidence appears in a transcript of court proceedings on May 12; the transcript was made available after diamond giant De Beers attempted to halt the court case, and put ADC into bankruptcy.

Jonathan Oppenheimer and Gareth Penny have been asked to explain why they appear determined to stop the legal proceedings against LUKoil and AGD, now that, according to the latest evidence, they are close to a judicial order to commence trial. They refuse to respond.

The new evidence was presented to District Judge Anne Mansfield by ADC's lawyer, Bruce Marks, a specialist on Russian racketeering. Marks presented the judge with invoices, and claimed that since 1998 until the present, LUKoil has been using a local company called DS Engineering to bill thousands of dollars every month for engineering and other services performed for LUKoil.

DS Engineering, Marks said, was "nothing more than a pass-through account." Cash was moved in both directions, he added - from Colorado to Moscow, and from Moscow to Colorado. Documents for one month, October 2001, showed $32,000 in cash invoiced and paid by LUKoil for running a variety of business operations in Colorado.

LUKoil's attorney, Frederick Baumann, told the judge in the hearing "there is no contact whatsoever between the facts of the plaintiff s claims and the State of Colorado."

Judge Mansfield disagreed. On May 12, she overruled LUKoil's objections, and ordered that "LUKOIL shall produce all information and documents responsive to all ADC s interrogatories and requests for production

If the judge had dismissed ADC's application, the court case would have had little chance of succeeding. However, the May 12 orders apply serious pressure on LUKoil either to disclose, and risk trial on the substance of ADC's charges; or else to negotiate a settlement on ADC's terms. This in turn has renewed the pressure on diamond giant De Beers to call off its attempt to liquidate ADC.

Well, to get serious (ahem), the oligarchs in question are Vagit Alekperov and Alisher Usmanov, as explained here this week by John Helmer.

ADC is now being directed by a group of minority stakeholders, led by US attorney Bruce Marks; former board director, Clive Hartz; and the Firebird Global Master Fund of New York, with a stake of about 18%. De Beers owns 56% of ADC’s shares.
The new filing was lodged in the Denver city and county court for Colorado on November 24. It charges LUKoil, one of Russia’s largest oil companies, with racketeering, fraud, unjust enrichment, and civil conspiracy. Set out in detail is an alleged scheme by which LUKoil used Colorado, local companies, and at least a dozen Colorado employees to smuggle large sums of cash into Russia. The scheme has been revealed in order to buttress ADC’s claims that the Colorado court has jurisdiction over LUKoil to try the 11-year diamond mine case.

But, for the record, Lukoil does tie back to Lev Leviev. (Doesn't everything?) Lukoil owned one of the two diamond suppliers that Leviev needed to secure for his consolidated diamond business.

12/07: Israeli entrepreneur Lev Leviev is planning to consolidate his Russian diamond interests, creating a vertically integrated mining, manufacturing, and retailing group which will be offered for public shareholding subscription. According to Leviev's Moscow representative, Valery Morozov, the assets to be combined include the small alluvial mining concern, Uralalmaz; Ruis Diamonds, Leviev's Moscow manufacturing plant; Kama Kristall, a smaller cutting plant in Perm; and the Moscow jewellery plant. ...It is clearly in Leviev's interest to assure his rough supplies by taking equity stakes in new Sakha mines, or in one of the two diamond projects in Arkhangelsk region - Lomonosov controlled by Alrosa, or Verkhotina controlled by LUKoil. He has made moves in each of these directions, and courted some well-known Russian asset raiders.

What does it mean? Damned if I know. Just noticing I guess. But if I were to venture a guess, and I'm not saying I am, it looks like some more interference with the oligarch business model.
Posted by A. Peasant at 4:25 PM

AP your posts are turning up a day late here. Any idea why?

i do not know incoming. things haven't really been the same for several weeks, so i don't know what all happened ever since the spam incident.

Yipes AP, one needs a score card to keep track of all the players involved here. I thought I knew a little bit about the Russian oligarchs and LukOil but this information is complex and quite frankly, rather baffling.
I guess it is not so simple as Putin vs the (Jewish) oligarchs.It never is, is it?
Your mastery & command of this fascinating topic is humbling. It's back to school for me.

oh Peter, you give me waaay too much credit i assure you. trust me my eyes glaze over immediately i can't keep 'em straight either. i think this helmer guy knows his stuff however, so that would be a good place to start.

the basic trouble is that it's a soap opera on it's hundredth season, and that makes it really hard for people like us to pick it up anywhere. plus it's international, and it's secretive. so really, the pieces fling out all over the place, and no it's never as simple as putin v the oligarchs, and it's complicated of course by the whole double agent triple agent with a half-twist and who might be under mind-control, etc. etc.

so yeah we're prolly a little sick to even *consider* trying to understand, but hey that never stopped me before. haha.

Following on from incoming, yeah, a day late. When you post them do you see them in real time AP? Surely not. I popped in yesterday and there was nothing and today there's two. Otherwise Les Visible has been having this sort of monkey business for ages. Yours truly (with his weeny 300> a day) has been spared such things.

yes nobs, i see them right away. i don't have a lot of traffic at all, well under 100 a day so it's not like i have reach at all though i've been at it a long time. (your "weeny" 300 looks good to me). it must be more an accuracy thing, at least some of the time. that's all i can figure. which would prolly put me on a shit list someplace ha. or maybe it's because i am so unprofessional and i use swear words. haha. of course i am duly honored, whatever the reason.

You swear? Fucking Hell! You should see me!

As for your numbers, stick with it. You'll be surpassing me in no time. I'd always assumed you were up there with Aangirfan who gets a couple of thou a day.

no no no. things don't work that way for me. thus the swearing.