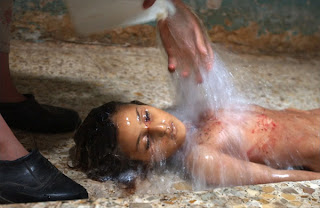 What if this was your beautiful little daughter?

Following Monday’s suicide bombings of three major hotels in Baghdad, the attacks were widely seen as an escalating attempt to destablize the country ahead of key parliamentary elections in March.

The top US general in Iraq said that while there was no definitive proof, he believed Monday’s attacks were conducted by Al Qaeda in Iraq (AQI) – an organization whose leaders appear to be increasingly well-educated and increasingly Iraqi, he said.

...At security checkpoints – including those surrounding Baghdad – the Iraqi government has relied heavily on an explosive detection device manufactured by a British private company that is being investigated for fraud. Last week, the British government stopped the export of the hand-held devices, which the US military has determined to be "totally ineffective," but they are still widely in use in Baghdad.

...Odierno said the explosives detonated on Monday were much less powerful than those seen in previous high-profile bombings, but at least one of the audacious attacks marked a change in tactics. Gunmen outside the Hamra Hotel, popular with Western journalists, opened fire on the compound's security guards before the suicide truck bomb drove through the barrier and detonated. “It’s the first time we’ve seen it executed this way,” Odierno told journalists. “As time goes on, their ability to impact becomes less and less, so they are trying to get the biggest outcome.”

While the US and Iraq had made great progress, they should not underestimate the difficulty of dealing with a sophisticated and constantly shifting organization, he said.

But exactly how clever does "al qaeda" have to be to outwit a totally useless, fraudulent bomb-detecting device?

Iraqi officials said they would begin an investigation into why their Government paid at least $85 million to the British company, ATSC, for at least 800 of the bomb detectors, called ADE 651s.

Official doubts about the device were first reported in November, citing US military officials and technical experts who said the ADE 651 was useless.

''We are conducting a criminal investigation, and as part of that a 53-year-old man has been arrested on suspicion of fraud by misrepresentation,'' a spokesman for the Avon and Somerset Constabulary in England said. The suspect's identity was widely reported as Jim McCormick, the managing director of ATSC.

Another company, Global Technical, also makes these useless devices. They have been sold to many countries in the Middle East and Southeast Asia, for tens of thousands of dollars A PIECE, God only knows how many innocent people have died as a result.

Bomb sniffing devices are not a new scam. ATSC, Ltd. has been operating over in the UK for a decade, and Global Technical had been falsely claiming since 1999 that the bomb detectors were given the approval of the British Military. Early last year, the UK government told Global Technical to stop claiming the GT200 had been given the Ministry of Defense’s approval– but other than requesting that their name not be used to endorse the product, they took no action.

“We will be making an order, under the Export Control Act 2002, banning the export of this type of device to Iraq and Afghanistan.

“The reason the ban is limited to these two countries is that our legal power to control these goods is based on the risk that they could cause harm to UK and other friendly forces.”

So essentially they are only banning the ADE-651 in places where it might kill NATO forces. But as for the citizens of Thailand, civilian and police alike, that have been killed as a result of reliance on the GT200? Well, they can just go on continuing to be killed by the fake bomb detectors, that’s just too bad for them.

Click here to watch a 10 minute BBC on this fraud. The BBC wanted to ask Mr. McCormick how he could JUSTIFY selling these so-called bomb detectors when independent experts say they can't possibly work.

Presumably, if he dared to answer the question, it would be simply because he made lots and lots of money. Presumably, the innocent deaths are of no concern to him.

Found: blogger devoted to exposing such frauds.
Posted by A. Peasant at 2:43 PM