there's only one word to describe this sort of thing

In the UK, over half of the scientists on SAGE have ties to drug companies. These scientists advise the UK government on the swine flu pandemic.

Many have declared interests in GlaxoSmithKline, the vaccine maker expected to be the biggest beneficiary of the pandemic....Official documents show some members are linked to vaccine manufacturer Baxter and to Roche, which makes Tamiflu....They were not obliged to declare the amounts they earned but they are thought to range from around £500 for a lecture or presentation to more than £100,000 for a directorship of GSK. Some will simply be heads of university research departments which received funding from companies.

Some months back I covered the circular reasoning used to defend one of these scientists, Sir Roy Anderson:

Considering that the Taxpayers' Alliance makes the charge, it seems that the UK government definitely pays Sir Roy to serve on the Sage task force drawing up action plans for the virus. Even if it's a token amount, the real lucre comes from driving the government contracts to GlaxoSmithKline.

The Department of Health and GSK denied there was a conflict and said Sir Roy did not attend Sage meetings where vaccines and drugs were discussed. Sir Roy was appointed to Sage to 'provide cross-government scientific advice regarding the outbreak of swine flu'. He was one of the first UK experts to call the outbreak a pandemic.

So here we see that the Department of Health and GlaxoSmithKline band together to defend Sir Roy on that basis that he sits out the meetings where drugs are discussed. The conclusion the reader shall draw being, presumably, that he has no influence on those decisions. However, in the next breath we learn that he is exceedingly influential. That's why he's on the task force in the first place! And in fact, he was one of the first UK experts to promote the outbreak to a pandemic! Later on in the story we learn more of his amazing, deadly influence:

During the 2001 foot and mouth outbreak, Sir Roy's advice to Tony Blair led to the culling of more than 6 million animals.

Ahh, a powerful man indeed. Theoretically he could stop someone in the hallway after one of these meetings and "advise" them to choose a GSK drug... But listen, he is a man with both scrupulous ethics and impeccable timing!

A spokesman for GSK insisted there was no conflict of interest. 'Professor Anderson stepped down from the government's flu advisory group on appointment to GSK. 'In May, he was asked to rejoin as a temporary member as the scale of the influenza pandemic became evident.

He stepped down from Sage after joining GSK but was asked to rejoin after the scale of the influenza pandemic became evident! And he, of course, as we already learned, was one of the first UK experts to call the outbreak a pandemic, a fact cited to prove his suitability for Sage, which resulting pandemic thereby facilitated his being asked to rejoin Sage. But since he very properly resigned first, it's all good. See?

But all this logic appears to be very upsetting to the important people at the WHO. They take umbrage at charges that the vaccine manufacturers improperly influenced their decision making process or that they exaggerated the threat of the virus. People who make such scurrilous charges simply misunderstand the planning process.

Keiji Fukuda, MD, special adviser to the WHO director-general on pandemic flu, told reporters at a press briefing that the WHO welcomes constructive criticism, but said charges of a "false pandemic" by a group of European officials led by Dr Wolfgang Wodarg, a German physician who chairs the Council of Europe's health committee, are "scientifically wrong and historically inaccurate."

Wodarg and 13 others charged in a proposed resolution that pharmaceutical company pressure on the WHO and member countries have led governments to waste healthcare resources and expose their citizens to insufficiently tested vaccines. The action comes as several European countries are cutting back on their vaccine orders because of weak demand, ebbing flu activity, and the need for just one dose per person.

In a related development, the European Vaccine Manufacturers (EVM), a trade group that represents companies such as GlaxoSmithKline, MedImmune, Novartis, and Sanofi, today in a statement rejected the Wodarg group's allegations. "EVM believes that the assertions in this motion are unfounded and result from a misunderstanding of the pandemic planning process and the collaboration between public and private sector partners," the group wrote.

...In its statement today, the EVM pointed out that governments have been working on pandemic preparedness plans for more than a decade and that other public health partners have been encouraged to respond to the risk of a pandemic.

See? Governments ASKED them to do all this stuff. What were they going to do, say no? No we don't want all this work. No thanks. ??? What are you nuts?

No, see, they collaborated. They were all in it together. Governments and big pharma. Together. One big happy family.

The pandemic declaration in the summer of 2009 called for clear action, the group wrote. "This demanded an unprecedented level of collaboration, involving WHO, national governments, health authorities, regulatory agencies, scientists, healthcare professionals, and private sector companies to facilitate a robust response and deliver the appropriate countermeasures."

BUT!!! Having said that, there was never any conflict of interest, ok? Never. Anyway, from January 25-27 a lot of important people will be at the annual North American Vaccine Forum in Washington DC, where they can be a big happy family together and talk about all the ways to make money developing new vaccines!

Building on the resounding success of the last 7 North American Vaccine Forums, the 2010 event will once again provide a highly valuable meeting place for senior level industry and public sector figures driving the development of novel prophylactic and therapeutic vaccines.

The 3 day conference program will feature a mixture of business, regulatory and scientific topics, with speakers drawn from big pharma/biotech, the regulators and and vaccine developers themselves. Breakout sessions, workshops and panel discussions combine to make the event highly interactive.

In 2010, the Washington Vaccine Forum will once again run concurrently with Phacilitate’s annual Cell & Gene Therapy Forum. Participants will be able to select the conference agenda of greatest current value to themselves and their organization, with all networking opportunities shared between the two events. Breakfast and lunch buffets, extended refreshment breaks and evening receptions will all take place in the shared exhibition area.

A total of 500+ senior level attendees participated in 2009. For more information on how your company can raise it’s profile with both sets of attendees all under one roof and in just three days at the '10 event, please click here.

Again, there's NO conflict of interest. It is NOT the case that these people get together to think up ways to make money off of vaccines. As a matter of fact, the CDC would like to speak to you about FRAUD and ABUSE regarding the H1N1 vaccines. That's right. SOME PEOPLE HAVE BEEN TAKING ADVANTAGE OF THE SITUATION. http://www.cdc.gov/h1n1flu/vaccination/h1n1_fraud_abuse.htm
Des 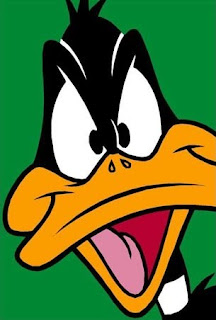 
Cartoon Poster: Close-up of the short-tempered egotistical Duck known as Daffy.
Posted by A. Peasant at 12:17 PM

Well if Sir Roy is calling them out I am in. Those investigators sure are quick. I wonder what the tip off was as to the problem, maybe armies gearing up for force vaccines?

oh yes, dubs, we are in good hands. haha