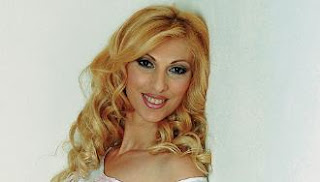 An update on the Hadjicostis murder, covered here and by aangirfan here,

...which you can readily see has intelligence services fingerprints all over it.

But never mind all that crazy talk about the embassy and the security cameras and the shell casings and Mossad and Cyprus blah blah blah. This is the very simple, very easy to understand white bread explanation, suitable for public consumption:

NICOSIA - A Cyprus court remanded a blonde TV presenter and her brother in police custody on Friday on suspicion of ordering the contract killing of media tycoon Andis Hadjicostis.

Elena Skordelli, a 42-year-old mother of two and TV show host, and her brother Tassos Krasopoulis, 37, appeared before a Nicosia district court and were remanded for eight days. They have not been charged.

The pair denies any involvement in the killing and their defence lawyers said the suspects wanted to help police with their inquiries.

They were arrested on Thursday night in connection with the gangland-style hit on the media mogul after a suspect already in custody admitted to his part in the crime.

He then fingered the brother and sister as the people behind the killing, police said.

According to the suspect's police statement, he met the TV journalist and her brother on two occasions during which they ordered the hit on Hadjicostis for a fee, the court heard.

Police believe the motive was financial and personal revenge as they are both shareholders in private channel Sigma TV.

Hadjicostis, a father of two, was chief executive of the Dias media group, one of the island's largest, which owns Sigma TV, Radio Proto, daily newspaper Simerini and other publications.

It is alleged that the woman wanted her revenge after she was sacked from Sigma and held Hadjicostis responsible.

In return for carrying out the hit, the other suspects were also to receive jobs at the station, the court heard.

Five suspects are in police custody on suspicion of involvement in the killing.

The 42-year-old media mogul was gunned down outside his home close to the US embassy on January 11.

Earlier in the week, Skordelli had issued a statement threatening to sue anyone who implicated her in the killing of her "beloved Andis".

She also claimed that her life was being endangered by a scurrilous whispering campaign against her and requested police protection saying someone had tampered with her car.

The seasoned journalist reportedly has a 20-% share in private TV station Sigma, which belongs to the Dias group owned by Hadjicostis's father Costis.

Three other suspects arrested last week are expected to appear again before a Nicosia court on Saturday.

Police have asked Interpol to circulate a warrant for the arrest of a sixth suspect, Gregoris Xenofontos, 29, who is thought to be in Moldova.

The arrests came after the outcome of the testimony of one of three suspects already in custody, who is said to have ‘broken under police questioning’ and confessed his involvement in the crime. Authorities withheld comment on the nature of the confession....The minister was flanked by Kypros Michaelides, police superintendent for the Nicosia district, who also refused to answer any questions by newsmen, such as whether the two new suspects were being considered as the masterminds of the crime, or whether the arrests would take investigations in a new direction.

...Earlier this week Skordelli’s lawyer sent letters to the police chief, Attorney-general and the Justice and Interior Ministers requesting protection after an alleged attempt to cause her injury. In the letter, lawyer Michalakis Kyprianou claimed his client was potentially in danger and asked for police protection. He further claimed that unknown persons removed three nuts from the front tyre of Skordelli’s car last Friday, “evidently, to cause an accident or even her death”.

The letter came just 24 hours after the TV presenter ordered her lawyer to sue everyone “responsible for all the slanderous and malicious publicity, which has been carried out at my expense, as much in the Greek domain as in the Cypriot, via televisual or electronic formats, in printed, televised and electronic forms of media.”

Almost from day one of the murder, Skordelli’s name came up on a number of Greek websites and blogs offering theories about the murder.

Their remand for the other three suspects ends tomorrow, at which time police are expected to request a renewal. The so-called fourth suspect, 29-year-old Gregoris Xenofontos is wanted by police, who have issued European and international warrants for his capture. Xenofontos is believed to have departed for Moldova with his wife a few days after the murder.

remanded, but not charged?
seems odd, no?

yes. maybe there's a problem with the evidence. ? just a thought.

"authorities withheld comment on the nature of the confession"