logistical prowess: Part I: ZAKA in Mexico and the difference between five and six

As I wrote the other day, a ZAKA team rushed to Haiti from Mexico, where they had been working the crash site of Moshe Saba's (Moises Saba Masri) helicopter. The crash occurred on Sunday night, 1/10/10. News reports said nobody on the ground was hurt. Apparently there's a deep ravine next to the house or the three story building or the billboard, or whatever the helicopter supposedly hit before bursting into flames while in the air, on on the ground, on the outskirts of Mexico City, in the foothills, in the fog, killing five or maybe six people. 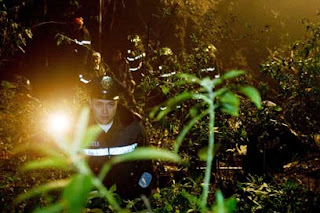 responders at the crash site
it is nighttime
According to this source:
Some reports said the remains were charred.

ZAKA volunteers arrived from Israel in the morning, local time, and went straight to the crash scene to carry out their sacred work of collecting all human remains for burial. The four-man delegation from Israel is working with other ZAKA volunteers from the US and Mexico.

ZAKA arrived Monday morning, local time, from Israel. Quite the feat, actually, considering that if you left Israel at night and traveled non-stop, it would still take a good 18 hours or so to get to Mexico. Also quite the feat since Israel is eight hours ahead of Mexico, which means it was early morning in Israel when the crash happened, which means they could not have left at night to arrive in the morning. Anyway, I'm not sure why they would send a team from Israel when ZAKA is an international organization with offices in Brooklyn, New York. But I'm sure they have their reasons.

Or, maybe they actually came from the United States. But why lie about coming from Israel? Just to make it extra dramatic? Or, possibly, to cover up some sort of foreknowledge? Sometimes Israeli lies seem almost gratuitous, as though there's no good reason except that it's fun, and it doesn't matter, and anything can be ignored or denied if necessary, and it makes the story sound better.

Zaka Spokesman Moti Bukchin said the rescue organization would send out a delegation Monday afternoon to Mexico via the United States in order to assist in identifying the bodies of the victims. The delegation will be joined by Rabbi Ovadia Yosef's son, Rabbi David Yosef, as the personal delegate of the Shas leader. (Ynet, Reuters story, dated Monday 1/11/10)

ZAKA (Identification and Rescue - True Kindness): ZAKA is a non-governmental volunteer agency responsible for rescue, life saving and recovery. Members work alongside law enforcement and emergency personnel when responding to incidents of terrorism, accidents, or disasters. It is a humanitarian agency, mostly made up of Haredi Jews who assume the duty of collecting human remains to provide those remains a proper Jewish burial, known as Chesed Shel Emet, "True Virtue." ZAKA is an international organization, with offices in Israel and New York, and has dispatched volunteers to disasters throughout the world. The Israeli government recognizes ZAKA as part of the security apparatus, because volunteers are trained by the Israel Police and Magen David Adom.

See this ZAKA newsletter from December 2009 (http://www.zaka.org.il/newzaka/2009/newszaka12ebg.pdf) to read all about ZAKA's latest feats, including plans to establish a ZAKA International Rescue Unit in Buenos Aires, Argentina. Also see the ZAKA website: (http://www.zaka.us/index.asp).


"This shared fate of the two peoples is reflected in the word Jerusalem, which has the letters USA at its center." - Yehuda Meshi-Zahav, at the 9/11 Manhattan Tribute to ZAKA and the FDNY

According to the story, Saba Masri was killed in a crash along with five other people. That would be six total. As noted above, "Initial reports indicated another person had been on board, but Moreno confirmed there were only five."


Another story here also says a total of five people died. CNN also says: five people. A few other stories along the way mention six. It varies from source to source.
Experience tells us, however, not to ignore initial reports.
Five people, six people... what's the difference? The difference is a human being. Does that person exist or not? Or is the person being erased? And if so, why?
What happens when we lose track of people? Criminals get away with murder. Each person has a life, and a story. The people who get erased are the very people whose lives and stories we need to know.
So yes, it matters whether there were five people or six people. It's what we call A FACT. We reality-based people are really into FACTS.
The ZAKA team went straight to the crash site in the morning, presumably marching into an ongoing investigation led by the local emergency services who had been on the scene since the night before. 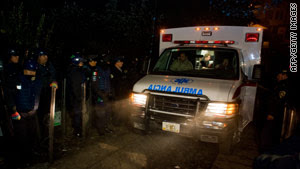 An ambulance leaves the scene of a helicopter crash near Mexico City, Mexico, on Sunday night." (CNN)
(Is that a city ambulance, or a private ambulance?)
Who was in the ambulance? Nobody was hurt on the ground, and ZAKA arrived in the morning to collect body parts, so what was the ambulance doing? Taking bodies to the morgue? That is what we might expect -- that the emergency personnel at the crash site all night would have removed the bodies to the morgue. Therefore, by the time ZAKA would arrive the next day, what work would they need to do at the crash site?

Let's not forget that Israel classifies ZAKA as part of the state security apparatus.


Maybe they show up to collect evidence and pay off local officials to say things like, "there were only five bodies" after initial reports had already mentioned six. ???

Ynet, who also reported six bodies, published this photo, courtesy of ZAKA. In other words, the news agency got the political file photo from the "non-governmental volunteer agency responsible for rescue, life saving, and recovery." Doesn't that seem a little odd? 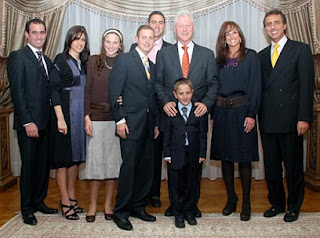