Would someone want Saba Masri dead?

Maybe. He had a lot of different business interests, and he definitely locked horns with a few people along the way.
Also: "He once entered negotiations to acquire Israel's Channel 10, but the deal ultimately did not go through."

His profile brings to mind two other successful media moguls who have recently been assassinated: Jamim Shah and Costis Hadjicostis. All three men exhibited something of an independent streak.

Saba Masri was returning from a trip to New York with his family. They had attended a family engagement party.

Highly-credible sources tell YWN that they had just returned from Flatbush, Brooklyn, where his brother had just made an engagement party at their home on Avenue S - in the Syrian Community. They had spend Shabbos in Flatbush, attended the party on Motzei Shabbos, and flew back to Mexico via airplane on Sunday. After landing, they transferred from a plane to chopper. A private jet left NYC for Mexico at approximately 3:30AM on Sunday night/Monday morning with family members, and at least one member of Flatbush Hatzolah [volunteer EMS -ed.] - a highly recognized Askan [Jewish lobbyist -ed.] in the Syrian community.

Hmm. A typo? This says the private jet left on Sunday night/Monday morning, and the crash happened (allegedly) just after 8pm Sunday night, so that doesn't add up. But leaving that aside for the moment, since it implies that Saba Masri & family could not have been on the helicopter that crashed, since they would have still been in New York at the time...and that's a little too weird to contemplate at the moment....

According to former Shas leader Rav Aryeh Deri, who described Saba Masri and his wife as humble people, Saba's father was also supposed to take the helicopter from the airport to the home, but at the last minute, he decided to take his vehicle. He couldn't remember why he decided to drive. (http://www.theyeshivaworld.com/article.php?p=44677)

According to a HaMevaser report, R’ Yitzchak telephoned Rav Ovadia Shlita after learning of the tragedy, broken and in pain, seeking guidance as what to do regarding his immeasurable loss and how to interpret his miracle, the decision not to travel on the chopper.

There is conflicting information about which family members were traveling with Saba Masri City authorities were not immediately available to confirm the information. According to Reuters, Saba Masri was flying with his family and Alberto Saba and Judith Humberto Casal. However, Notimex quoted Moreno Brizuela as saying the dead in addition to Saba Masri included Alberto Saba Jr. and Judith Adela Saba or Tauchi Casal and the helicopter's pilot Capt. Armando Fernandez, while the sixth victim has not been identified. Reforma attributed to the security chief a statement that Alberto Saba Raffoul, Saba Masri's father, was not in the helicopter and had not died.

Saba Masri was a Sephardi Jew, not an Ashkenazi Jew. The Ashkenazi Jews run the whole shebang in terms of the power structure. The way I understand it, Sephardi Jews have too close an affiliation to Arabs, and since Jews and Arabs must be diametrically opposed per the Ashkenazi narrative, that doesn't leave much room for Sephardi Jews. They bend to the narrative to get some crumbs, or else they get nothing. 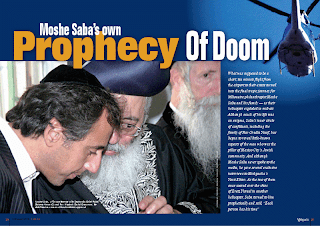 "Moshe Saba in conference with Sephardic Chief Rabbi Shlomo Amar and Rav Yitzchak David Grossman. He didn't make a move without rabbinic approval."
"What was supposed to be a short, ten minute flight from the airport to their estate turned into the final tragic journey for billionaire philanthropist Moshe Saba and his family  -- as their helicopter exploded in mid-air. Although much of his life was an enigma, Saba's inner circle of confidants, including the family of Rav Ovadia Yosef, has begun to reveal little known aspects of the man who was the pillar of Mexico City's Jewish Community. And although Moshe Saba never spoke to the media, he gave several exclusive interviews to Mishpacha's Yossi Elituv. As the two of them once soared over the skies of Eretz Yisrael in another helicopter, Saba turned to him prophetically and said, "Each person has his time."
Without reading these exclusive interviews, we can't know whether Saba Masri would agree with views like this, expressed over the weekend by a Sephardic Rabbi: (http://www.israenationalnews.com/News/Flash.aspx/180521) [2/20: This article has been scrubbed from the web, since yesterday 2/19/10. - ed.]

Former Chief Rabbi Ovadia Yosef called Iranian President Mahmoud Ahmadinejad a modern Haman, equating him with the villain of the biblical Purim story. "Just like in the days of the first Haman, we have had Hamans in all the generations. Today we have a new Haman in Persia who is threatening us with his nuclear weapons. Their swords will strike their own hearts, and their bows will be destroyed," Rabbi Yosef said.

These views might be genuine, or these views might be expressed to satisfy the Ashkenazi power structure. There's no way to tell from here. [And as a little note for the curious, Purim will be from February 28-March 1, 2010; and Easter is on 4/4 this year.]

Of course, there's also the matter of the Sephardic and Syrian Jew community caught up in the New Jersey organ trafficking ring last summer...(http://thejewishstar.wordpress.com/2009/07/29/after-arrests-sephardic-community-shudders/)

Last Thursday a decade-long FBI corruption probe in New Jersey and New York was wrapped up with the arrests of 44 men, including several prominent rabbis from the Syrian Jewish strongholds of Deal, N.J. and Brooklyn, N.Y. Most notable of all was Rabbi Saul Kassin, 87, of Cong. Shaare Zion on Ocean Parkway in Brooklyn. He is considered the leading rav of Syrian Jewry....The tight-knit medley of Sephardic Jews in Great Neck, who range from Iranian to Syrian and Afghani, were taking the news personally. ...“All Jews, we’re part of the same family,” she said....Rabbi Arnold Marans of Sephardic Temple in Cedarhurst said the Sephardic community here is not “monolothic” and that his shul was European Sephardim and not close to the Syrian Jewish community.

Perhaps from inside Jewry, these divisions seem very sharp. But from the outside? Not so much.

And guess who else claimed to be part of the Sephardic community? Jorge Puello.

study.ukrain techno symposium put together by?study rabbi daliances with the ukrain orphanage children. study, the clothes on the children during the internet confrence at the orphanage given as gifts plus bikes. and who they are and were,(some murdered). then study involvment with those children for child porn.study the destruction of their dreams of a normal life.all to boost internet ratings.study.they might be the culprit.those that used
Moshe and covered it up?.

Thanks for the tips.