In Part I, we learned that ZAKA is a non-governmental volunteer agency also considered part of Israel's security services. They travel around the world to assist at accident and disaster sites and to collect Jewish remains for burial.


In Part II, we learned from highly credible Jewish sources (who use a lot of Jewish words that non-Jews have to look up), that Saba Masri left the Brooklyn New York Syrian community after a family engagement party, accompanied by his family members and at least one member of Flatbush Hatzolah.


Hatzolah means volunteer EMS.
This unnamed person is also, according to the source, a highly recognized Askan in the Syrian community.

So, come to find out that some Jewish communities have their own ambulance services -- Hatzolah! Like ZAKA, except local. Who knew?

This causes some problems, as you might imagine. (http://www.hashkafah.com/index.php?/topic/25286-is-hatzolah-necessary/)

I know many Hatzolah members are dedicated volunteers whose hearts are in the right place when they join this volunteer ambulance service, but really it is an organization that divides the Jewish communities from the rest of the people.

Hatzolah is not really needed, there are EMT's that turn out of hospitals and FDNY EMT's/Paramedics. I think the Jewish communities of NYC should really look inward and also then look at their gentile neighbors of this city and really consider how an all Jewish politically connected ambulance service looks to everyone else.


Regular civilians volunteering in this politically connected group getting free parking placards, immunity from summonses and sometimes arrest, and the fact that the overwhelming majority of the calls they go on are to assist Jews only.

...The city would run just fine without Hatzolah and there would not be conspiracy theories floating around about Hatzolah covering up child/spousal abuse or other things.

One response on that thread:

All other ethnic/racial/whatever groups are welcome to open and fund their own ambulance corps if they can't control their jealousy. Conspirators can go screw themselves. Hatzalah has many local members, and their response time is a fraction of that of FDNY. Plus, their service is a hell of a lot better. All this with no burden on any reluctant taxpayers whose public education system we support. The hell with them.

Here is another thread full of righteous indignation when a police officer and a Hatzolah volunteer disagreed over street parking protocol. The general sense one gets is that the Hatzolah volunteers can do no wrong in the eyes of the Jewish communities, and those cops better watch out or some people might make a few phone calls, capice? (http://matzav.com/lakewood-hatzolah-volunteer-gets-ticketed-at-scene-of-accident)

But then, around September 2005, someone made corruption allegations against Flatbush Hatzalah, and there was a bit of a kerfuffle when a very official letter signed by four rabbis told people to stop discussing Hatzalah business on the internet because it is "destroying the organization in ways that we cannot elaborate in writing." (http://tinypic.com/dha06w.jpg%5Dhttp://tinypic.com/dha06w.jpg) (also see: http://chaptzem.blogspot.com/2005/09/threat-letter-from-rabbonim-real-or.html)

And some discussion followed about whether or not this was a hoax, or justified, or what exactly it meant.

Then, last summer, the FBI arrested 44 people including some Flatbush rabbis in a giant corruption bust. And then began the organ trafficking discussion...and it all makes a bit more sense now, at least in theory. 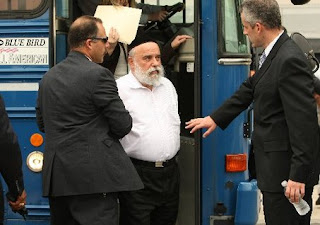 "Levy Izhak Rosenbaum, 58, of Brooklyn, N.Y, is taken into the back of the federal courthouse in Newark on corruption charges. He is charged with trafficking in illegal kidneys."
photo credit: Mitsu Yasukawa/The Star-Ledger

Thanks for the link. This was a fascinating read... went to the original.

A lot of pros and cons given by those in the discussion and also a lot of disdain for the non Jewish sector.

Only ONE person brought that up, Toddler Chaser says

"Hatzolah's one of those things I'm divided about. It does a great service. But it also seems needlessly divisive at times and emphasises the separation between Orthodox Jews and "everyone else". Do we need to duplicate all services just so we never encounter the goyim?".

The one who makes arrogant claims about 911 is revolting.

All in all... a very pertinent and showing thread. It seems to me to be an unnecessary service to be honest, she is very right with that one point. Although the words from the member of the organization Newbie was also of great interest. Is he telling the truth, possibly he is from his own point of view.

I refuse to believe all Jews are evil of intent and time will prove that the mainstream are as much victims as the rest of the world thanks to rabbinical propaganda and power. He speaks with authority, who knows.

Thanks for the thread, very interesting Annie.

thanks for checking it out Noor.