The ZAKA team was still in Mexico, so they went to Haiti.

Oddly enough, ZAKA had planned to establish an international rescue unit in Mexico that very same week! This report is dated 1/11/10. As we learned earlier, the ZAKA team was supposedly on the crash site the morning of 1/11/10. (http://www.theyeshivaworld.com/article.php?p=44611)

In a tragic and cruel twist of fate, the ZAKA International Rescue Unit delegation which was due to fly to Mexico City later this week to begin training 50 local volunteers in rescue and recovery techniques, left Tel Aviv this afternoon to attend to the scene of the helicopter crash in Mexican Jewish businessman and philanthropist Moises Saba was killed along with his wife, son and daughter-in-law and two others on Sunday night.

First off, what a coincidence that just as they planned to be in Mexico, the exercise "went live" as it were. Similarly, as noted here, a conference on First Emergency Response also took place in Israel the very same week. (1/11-1/14)

Secondly, the team left Tel Aviv in the afternoon of 1/11 to attend the crash site of six people. (See Part I.) Not sure how that departure time squares away with the reported facts, either. The helicopter reportedly crashed shortly after 8pm Sunday the 10th (http://matzav.com/jewish-mogul-moises-saba-killed-in-accident), and the pictures confirm that it happened at night. Since Tel Aviv is eight hours ahead of Mexico, it was around 4am there on the 11th. If the authorities rustled the team out of bed and onto a plane for 5am and they flew for 18 hours nonstop, they could be in Mexico City for the late afternoon of the 11th, even though they claimed to be there on the morning of the 11th. But why would they leave in the afternoon... of the 11th? That actually makes sense under normal circumstances, except it's not what we've been told. Or maybe they left on the 10th, but that would be too early, since the crash hadn't occurred yet. So, something's wrong with the story, as it's been reported.

The idea to establish a ZAKA International Rescue Unit in Mexico, trained by Israeli ZAKA volunteers, was born out of a ZAKA tribute evening which Moises Saba hosted in his home in November 2008, where guest of honor former US President Bill Clinton was the keynote speaker. Saba’s generosity facilitated the establishment and training of the Mexico ZAKA International Rescue Unit.

Wow, so it was Saba's own idea. Perhaps the picture of him (Part I) with Clinton had been taken at that November 2008 soiree.

“Who could have imagined, not just that the Mexican volunteers would need to learn the course content hands-on, in a real incident, but that it would involve the tragic death of the person who initiated and funded the course,” noted head of the ZAKA International Rescue Unit Mati Goldstein as he prepared to board today’s flight to Mexico.

What can I say? WHO COULD HAVE IMAGINED... that little phrase has to go down in history forever linked to Dear Condi, as she lied her ass off before the 911 Commission, also a bunch of liars, on May 19, 2004.

I usually refer to that as JUSTIFYING. Many times we see events that JUSTIFY items on somebody's agenda.

How convenient is that, when something happens to JUSTIFY something you already wanted to do? Very convenient.


Before leaving for Mexico, the ZAKA delegation met with Rabbi Ovadia Yosef, who gave his halachic ruling regarding the ZAKA team’s work in collecting body parts at the crash scene. They then met with Israeli Chief Rabbi Shlomo Amar, who sent with the delegation a letter to his counterpart in Mexico, requesting to delay the funeral of the victims until the ZAKA team has completed its work in collecting all body parts from the scene of the crash.

How did they have time for all these meetings, and prepared letters about the rules and regulations for handling the "body parts," in the wee hours of the morning, and still get to Mexico in impossible record time?


Moises Saba has supported ZAKA since its inception, including the donation of two ZAKA ambulances. During the tsunami disaster, in which a Mexican was feared dead, Saba funded the ongoing search for his body until positive identification ensured that his wife of one month would know her husband’s fate.

You know, no matter which way you look at this, somebody is lying or we have a lot of lousy journalists around, or both.

So when the Haiti earthquake hit on the 12th, the ZAKA team immediately deployed from Mexico to Haiti, allowing them to be the first Israeli team to arrive in the disaster area.

According to the ZAKA newsletter (http://tinyurl.com/yg4qdcd), the team flew into Port-au-Prince on Thursday, 1/14, in a Mexican Air Force Hercules plane, accompanied by Jewish volunteers from the Mexican Kedena organization. They immediately went to the site of an eight-story collapsed building, where they worked for 38 hours with rescue equipment provided by the Mexican military, to pull eight students alive from the rubble.

Having received permission from the rabbis to continue working to save lives, they continued to work through Friday night religious services. Somehow they were unable to communicate with the IOF delegation that had arrived on Friday, but miraculously they managed to get an email to ZAKA headquarters in Jerusalem describing the hellish conditions, as they communed with delegations from Mexico, England and Scotland. Later on, when they sat with Jordanian security guards and people from Qatar and Egypt, "it was strange."

Despite the harsh conditions, and the trauma of being surrounded by Haitians begging for water, they did manage to survive on energy bars they procured in Mexico, in addition to the kosher food they received from Chabad and the American Army.

But a little later on in the newsletter....

When all the body parts were found, the funerals went ahead following another halachic ruling and the ZAKA volunteers continued their work in clearing the site. It was at this point that the quake in Haiti struck, and, without hesitation, the ZAKA volunteers decided to continue to Haiti, a relatively short distance from Mexico City.

Using the connections of the Saba family and others in Mexico, the ZAKA delegation managed to fly out with the Mexican air force delegation on Wednesday, 13 January, receiving the mandatory seven injections on the flight. The speed of the operation meant that the ZAKA volunteers were the first Israeli delegation on the ground in Haiti, working together with the Mexican team.

Good collaboration there between the Mexican government and Israel. Very nice. Good use of connections. Very tight. Still a little confusing who went where when, however, to collect “body parts.” Did they leave on the 13th or the 14th? Did they go straight to the eight-story building or did they do something else upon arriving in Haiti? We heard so much about the logistical problems and bottlenecks getting equipment and supplies and everything to the people in need. But somehow, surprising us no end, practically inconceivable, the Mexican military and Chabad and the American Army got the necessary supplies to Israel's ZAKA team -- even Kosher food! -- in the middle of a horrific disaster zone where people were allegedly killing each other for a drink of water, so that they could "save lives." 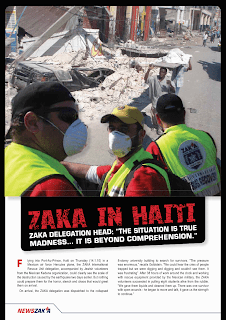 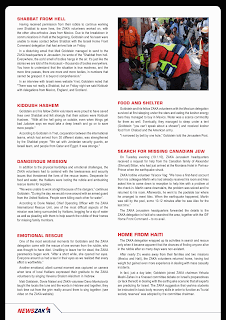 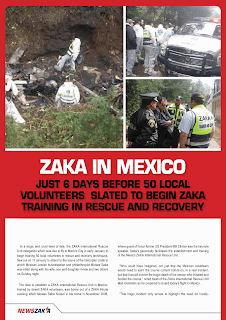 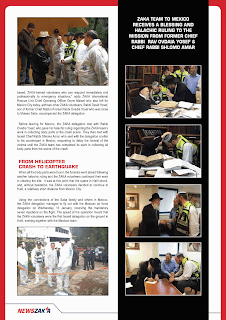