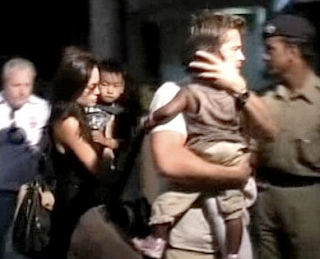 Think you had a good weekend? Think again. Brad, Angelina and the kids, currently in Pune, India, hopped a private charter flight to Goa, India for a little R&R. Reports are rolling in that the couple needed a break from the 'razzi and left Pune on Friday night around 9pm on a small jet.
Goa's fame and beauty have attracted multiple old-school Hollywood types, as well as India's wealthiest families (think private beach houses, etc.) The Pitt's apparently checked into a guesthouse in Ashvem Beach in North Goa about 50 miles away from the Dabolim international airport there. Is Goa the Hamptons of India? Hm....The word is that North Goa is much more vibrant that South Goa, so we think it'd be like East Hampton vs. South Hampton perhaps. Shhh! Don't let Lizzie Grubman find out.


Actually, sometime between then and now, Goa fell apart. I think, possibly, there's a connection between the influx of the Hollywood types and wealthy Indian families, and the increase in drugs, rapes, and organized sex trafficking. Just. A. Guess.


I referenced this December 13, 2009 jpost (cached) article about two weeks ago, and I will reference it again today: 'Israelis in Goa disastrous for tourism.'


In one section he quotes a tourist from the UK who gave his opinion on Israelis in Goa as saying that Israelis come to the area and bring with them drugs from Pakistan, Afghanistan and Kashmire, then use Goans and Indians to sell it. "The Israelis who sell drugs have control over the Ministers from Goa to Delhi," the tourist said. "They pay them a large amount of money. They also bribe the police."

The Goa Chamber of Commerce and Industry (GCCI) has issued strict caution to the state government, asking it to shore up its act on tourism, in a pre budget note which was handed over to chief minister Digambar Kamat on Tuesday.

...Industry stalwarts like travel and tourism association of Goa (TTAG) president Ralph de Souza have already said that the bogey of the Russian mafia in Goa could spell disaster for tourism in the state in the near future.

Tourism minister Mickky Pacheco had earlier said Goa was on its way to becoming the rape capital of India. Increasing crimes against tourists in recent times, beginning with the rape and murder of British teenager Scarlett Keeling, has put the international spotlight on Goa.

The recent rape of a nine-year-old Russian girl Jan 26 triggered a nationwide media debate on the safety of women tourists in Goa.

A 25-year-old Russian woman was allegedly raped by a Goan politician in December last year.

Police have also been unable to crack the mysterious death of Russian teenager Elena Sukhonova, whose mangled body was found on the railway tracks near Thivim, 25 km from Panaji.

Goa receives nearly two million tourists annually, nearly half a million of which are foreigners.

More specifically, from jpost: "Tourists from Israel, along with those from Britain, Russia and Germany, top the number of tourists arriving in Goa every tourist season."

And police having trouble cracking the case? There seems to be a rash of that going around. The police in Delaware seem to experience the same problems.

PANAJI: A senior Goa police official on Thursday admitted that the state is emerging as a den for the organized sex mafia in collusion with the local police.

Superintendent of Police (Criminal Investigation Department) Atmaram Deshpande wrote in his weekly column in a vernacular daily 'Gomantak' Thursday: "There is a disturbing increase in number of instances where massage parlours and beauty salons are being used for prostitution. People are getting restive."

...Deshpande, who is the nodal officer for all police intelligence networks in the state, in his article has also taken a subtle dig at the police top brass that had approved a Russian belly dancer for the inauguration of a coastal police station in Anjuna last year.

"There is an increase in bar dancers, foreign (belly) dancers and escort services professionals coming in to Goa. There is an urgent need for these to be stamped out, before they flourish here," Deshpande said.

"The police have to keep an eye on massage parlours and beauty parlours. But sometimes the local police turn a blind eye to these issues and then the crime branch is forced to bust these operations," Deshpande said.

...Deshpande said that Goa, a major tourism destination in India, is also emerging as a centre for trafficking and high profile prostitution.

"Over the last one or two years, young Goan women too have been getting involved in the business of prostitution. That is a worry. Since this (high profile prostitution) is an easy way to get into the world of fashion and the hotel industry, a lot of women from India and abroad are flocking to Goa," Deshpande said.
Goa receives nearly two million tourists annually, of which nearly half a million are foreign nationals.

Maybe they want to meet some Hollywood people.


I would also anticipate the Goa police having trouble catching the Israeli drug dealer's Kazakh girlfriend. Wouldn't surprise me one bit.

PANAJI: Anti-narcotics sleuths are tracking down the Kazakh girlfriend of an alleged Israeli drug peddler arrested in the coastal belt of north Goa for possessing drugs worth Rs 3.81 lakh.

The residence of David Graham alias Dudu was being searched for nearly 48 hours for documents related to his import export company, which police suspect was used to transport drugs out of India, a senior police official said Wednesday.

"Yes... his girlfriend is missing. We had summoned her to the anti narcotics cell police station, but she has suddenly disappeared," Superintendent of Police (ANC) Veenu Bansal said.  Bansal however refused to reveal the identity of the Kazakhstan national.

Dudu Division Import and Export Pvt Ltd, a firm run by the accused, came under the police scanner after its annual returns showed profits only once in 2005. The company specialises in exporting chocolates and garments.

"We are interested in knowing the exact nature of their business. The company has the making of a front for drugs," the official said.

Dudu was arrested on Monday at Anjuna and 144 ecstasy tablets as well as quantities of heroin, cocaine, liquid LSD and charas were seized from him.


As if that isn't bad enough, corrupt officials also rape the land in Goa.

Addressing a press conference here, Leader of Opposition and former chief minister Manohar Parrikar claimed that illegal mining in Goa comprised an unparalleled 22 percent of the total nearly 33 million tonnes of iron and manganese ore exported from the state annually over the last decade.

“Digambar Kamat has been the mining minister for 10 years now. He is directly responsible for the rampant illegal mining in Goa,” he said, terming Kamat’s government “impotent” to quell the large-scale illegal mining.

Parrikar also accused Indian Administrative Service (IAS) officer Yaduvanshi, who besides being Kamat’s secretary heads several crucial departments including mining, forests, of being part of the conspiracy to shield the illegal mining lobby.

...“There is complete chaos in the mining sector. Most ministers are involved in illegal mining,” he said, adding that the mining policy being devised by the state government was “an eye wash”.

Noting that mining for minerals was a central government subject under Schedule I of the constitution and the state government does not have much of a say in it, Parrikar said the state government can effectively deter illegal mining and mining-related excesses by enforcing laws on transportation and implementing other existing laws.

Open cast mining, a Rs.6,000 crore industry in Goa, is seeing increasing popular resistance due to uncontrolled illegal mining and rampant destruction of the state’s forests. The opposition has repeatedly alleged on the floor of the house that the chief minister and several cabinet ministers were sheltering the mining mafia in collusion with the bureaucracy.

This may, or not, be relevant - but the Dubai interests are .. sort of having trouble setting up "the new Kuta Bali" in Lombok.

hi Davo,
hmm. yes i would think that relevant. i will google that, thanks mate.