Regarding Mr. Puello and child trafficking in Haiti and the possible connection to Chabad. Why bring it up?

Brian Akira (What Do You Believe?) has posted an exhaustive rundown of Jewish history in the Dominican Republic, beginning with the observation:


As soon as these “Christians” were arrested, bigoted, small-minded “antisemites” began predicting that some Jew would turn out to be behind the whole racket. However, if you had made on that prospect, you’d now be collecting some winnings.

Yes, because when you start to look into certain things, you discover a pattern.


There are about 300 Jews in the Dominican Republic, with about 270 living in the capital. There are three synagogues; two in the capital and one in Sosua. The most influential religious authority is the Chabad Lubavitch synagogue in Santo Domingo.

...Judge Saint-Vil said he will begin his own investigation into whether the trafficking suspect had been working with the Americans detained in Haiti, and has requested assistance from the U.S. Department of Homeland Security to look into Puello. 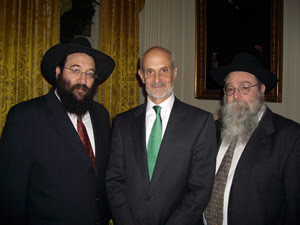 Oh hey look here's some Lubavitchers with former head of Homeland Security Talmudic Jew Michael Chertoff. But he's not in charge of DHS anymore so I'm sure we have nothing to worry about. Right? Yeaah. Probably not.

My education about Chabad began around the time of the Mumbai attacks.


These rabbis have had their pictures taken with many famous people. Go ahead and look it up. Look up what they stand for. Have you ever heard of them? Do you think they are some obscure, harmless rabbis? Think again. These are powerful people who throw their weight around at the highest levels.

I soon learned that Israelis are all over India, and young Israelis go to India to decompress on drugs after their IOF stints, and the Chabad houses serve as chaperones to deal with the ensuing messes. There used to be a series of videos about it, all of which I watched at the time, but they've since been removed.

Having watched them, however, it didn't surprise me to read about Israeli's in Goa being disastrous for tourism. (JPost, cached)


A book published by the Council for Social Justice and Peace (CSJP), an arm of the Roman Catholic Church in Goa, presents Israeli tourists as a "burden" to those who live in the area. Claiming the right to say no: a study of Israeli tourist behavior and patterns in Goa was authored by 11 seminarians in 14 sections and totals 96-pages in length. The study was based on an undercover survey and personal experiences of the members of the seminary as they traveled around Goa finding Israelis in the many tourist spots.

..."One can also notice many unbecoming activities like flesh trade, drug abuse, rave parties and crimes like rapes, murder etc., making hay as the sun of tourism refuses to set on our land," Ferrao wrote.... The second section of the report, called "Is Goa The Rome of the East or Israel in the East?" points out the military training of Israelis and its effect on how they act once they get to Goa."The disciplined and strict environment, the encounters, the shoot-outs somehow distorts their psyche and thus becomes a burden to treat," the report stated. "So these people are sent on holidays to different destinations in order to recover themselves and Goa is one of the destinations."

In Myron Jeson Barretto's article "My Experience/ Understanding of Israeli Tourists and Other Tourists at Vagator and Arambol Beach," he walked around Goa's beaches and spoke to non-Israeli tourists on how they viewed the Israelis. In one section he quotes a tourist from the UK who gave his opinion on Israelis in Goa as saying that Israelis come to the area and bring with them drugs from Pakistan, Afghanistan and Kashmire, then use Goans and Indians to sell it. "The Israelis who sell drugs have control over the Ministers from Goa to Delhi," the tourist said. "They pay them a large amount of money. They also bribe the police."

The videos (again, which were removed for "violating terms of service" haha) showed this sort of behavior in India and how the Chabad houses handle these problems by providing refuge to the Israelis engaged in the criminal behavior.

The Chabad has houses all over the world -- 950 cities in 75 countries.

From Divining the News:


There is a history of Chabad Houses not only being used as safehouses and logistics centers for Israeli intelligence but as storefronts for criminal activity. In March 1989, U.S. law enfocement rounded up a criminal network in Seattle, Los Angeles, New Jersey, Colombia, and Israel that involved a Chabad House that was involved in money laundering and currency violations. 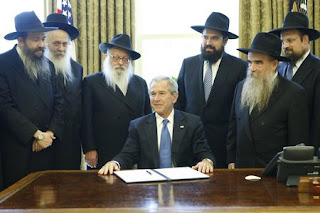 Are you starting to get the picture? These people are all over the place, and they have connections. Connections are very useful for running rings. From the same post at DTN, a story about Chabad in Bolivia.


Bolivian police forces raided a Chabad center in the northeastern town of Rurrenabaque a number of times in recent days, ordered its closure and arrested a number of Israeli tourists who were staying there. Rabbi Aharon Fraiman, who heads the center, told Ynet the police refused to give him a reason for the raid, but rumors throughout the town have linked the police activity to an assassination attempt on the Bolivian president last week. On Wednesday, after the center temporarily resumed activity, Fraiman, who was almost arrested himself, said this was nothing more than a local dispute: “An anti-Semitic restaurateur who thinks we are hurting his livelihood is doing everything to get us out of here,” the rabbi said. On Thursday, however, the multiple arrests, closure of the center and the local media’s coverage of police activity in the area, led the rabbi to believe it was something more: “Apparently it’s not him, but something bigger. He doesn’t have this much power”. 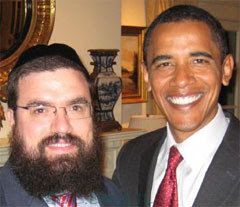 "Racist and extreme Zionist and anti-Gentile Jewish sects such as Chabad Lubavitch and the ADL of B'nai B'rith have direct access to European and supranational politicians, presenting themselves as humanitarian organizations."
Humanitarians.


This is rich, from Wikipedia, under the category Influence (links removed):


Chabad pioneered the post-World War II outreach movement, which spread Judaism to many assimilated Jews worldwide, leading to a substantial number of baalei teshuva ("returnees" to Judaism). The very first Yeshiva/Rabbinical College for such "baalei teshuva", Hadar Hatorah was established by the Lubavitcher Rebbe.

Chabad followers have had a notable influence on Jewish entertainment. Composer and rabbi Shlomo Carlebach began his outreach work as a representative of Chabad (he later moved away from the movement), Avraham Fried is also an adherent.

According to Steven I. Weiss, Chabad's ideology has dramatically influenced non-Hasidic Jews' practice with regard to Jewish outreach issues.


UPDATE: Speak of the devil....an attack on Westerners in India, near Chabad, and who is the first suspect? Islamic terrorists of course.

An Italian and an Iranian were among the nine people killed in a bomb attack on a restaurant in the western Indian city of Pune, police said. Pune police commissioner Satyapal Singh told a news conference that 12 foreigners were also among the 60 people injured, while the rest of the victims were Indian, he said. The bomb, hidden in a backpack under a table, exploded at about 7.30pm Saturday (local time) at the German Bakery restaurant, which is a magnet for young Indians and foreign tourists.

The eatery is near an ashram, or religious retreat, popular with overseas visitors, and a Jewish cultural and religious centre run by the orthodox Chabad-Lubavitch movement.

No arrests have yet been made, Singh told reporters, and India's government said it had little idea who was behind the bombing. Sources said they were looking at the possible involvement of Islamist militants in the country's first big attack since the 2008 Mumbai massacre.

Senior internal security sources, who declined to be named, said the focus had fallen on Pakistan-based separatist group Lashkar-e-Taiba (LeT), which has been blamed for the Mumbai attacks, and a local militant group called Indian Mujahideen, because both had in the past been behind bombings in India. "As of now our line of investigation is towards the possible involvement of LeT in the attack ... a sleeper module of the Indian Mujahideen could also be involved," a senior interior security official overseeing the probe said. Both groups have ties and are fighting against Indian rule in Kashmir, the disputed Himalayan region. "Nothing is ruled out, nothing is ruled in. The investigation is in progress," Home Minister Palaniappan Chidambaram said.

UPDATE 2: Daily Bastardette is all over the Puello case and has confirmed many details about Puello's connections or lack thereof:

While Torres Puello has been telling reporters during recent interviews that he is convert to Judaism and is president of the Sephardic Jewish Community in the Dominican Republic, several Jewish leaders say they have never heard of him. {SNIP}

...But, there are other references to Torres Puello showing he may not be as invisible as the DR Jewish community would like him to be.