Here are some of the people who assisted Haiti relief efforts on behalf of Israel.

Rabbi Shimon Pelman, director of Chabad-Lubavitch of the Dominican Republic 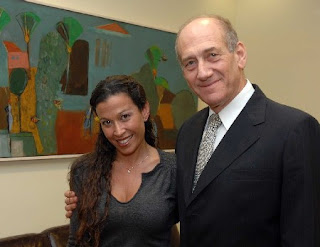 Due to IFA`s extensive activities during the war in the north, Prime Minister Ehud Ulmart invited Gal Lusky to a private meeting. In the meeting, Lusky presented IFA`s International disaster response activities and specified IFA`s activities during the war in the north. Lusky reviewed in details the two aspects the organization was focusing on – civilian and military. In addition, Lusky pointed the Prime Minister to five significant issues regarding necessary follow ups and lessons for the future.

Following the experience in the north, IFA sensed the need for a better preparation of the civilian rear area to the next war. IFA called for establishment of a civil humanitarian coordination center that will allow maximum utilization of donations such as: food, equipment, human resources etc. The coordination center will prevent duplicity, improve the supervision on the equipment installations and minimize corruptions. The Prime Minister praised the activity and its extent and encouraged the organization volunteers.

Lusky started the Flying Aid organization after her brother was seriously wounded fighting Lebanon in 1992. http://www.ynet.co.il/english/articles/0,7340,L-3554523,00.html


“We mainly supply aid to places which Israel is unable to send assistance to due to a lack of diplomatic ties,” she explained. “As a civilian, independent group we are bound only by our conscience, we don’t ask for governmental permission in order to act and it is technically difficult to prevent us from entering.”

...The organization’s volunteers come from all walks of Israeli life including trauma therapists, logisticians, doctors, Jews, Christians, Druze and Bedouins. The hardcore participants entail about 100 people who are alerted and act immediately in the case of an emergency. They leave their homes, families and work, at their own expense and completely voluntarily go out to the field.

The IFA is subsidized by contributions from an array of organizations including the American-Jewish Committee (AJC) the Israeli companies Suny and Lotus, the Joint and worldwide Jewish federations.

In order to prevent delay of assistance during real time, Lusky works to secure funds for the organization before a disaster occurs. “There is no time during an emergency, people die. In the business world time is money, but in our world time is life and you can’t gain or fix life when it’s gone,” she said.

Lusky and the IFA are in need of additional volunteers, especially in Israel. “Secretarial abilities can greatly ease our work here,” she explained. “In addition, I need writers with outstanding English, almost diplomatic, who can connect the organization with donors worldwide, and who know what titles to give to each leader.”


Some of the points made:
Make of all that what you will. Most private people I know struggle to pay their bills and can't fly off to help disaster-struck peoples at a moment's notice and survive for a month without help while simultaneously providing 10,000 hot meals a day plus surgeons to the local communities....but maybe we're just doing something wrong here. Not that we wouldn't like to be more helpful.

Former Israeli President Moshe Katsav also invited Gal Lusky to a closed-door meeting at his residence in Jerusalem in December 2005, to thank her for her work in the Republic of Georgia, in Southeast Asia after the tsunami, in northern Pakistan and India after an earthquake, and in Louisiana following Hurricane Katrina. http://www.israel21c.org/opinion/israel-s-superwoman-takes-flight-to-help-others

Moshe Katsav came under a cloud of scandal in the summer of 2006 for rape and sexual harassment charges. Eventually ten women had made charges against him. He did not go gracefully.
http://en.wikipedia.org/wiki/Moshe_Katsav

A senior police official told Haaretz that "the material that has been compiled thus far in the affair is more significant and dramatic than that which has been made public in the media."


Former President Moshe Katsav began testifying Sunday in a Tel Aviv court on accusations of rape and sexual harassment that were brought against him. The charges in this closed door trial were brought by three former employees of Katsav.

Katsav faces two counts of rape against A., who worked at the Tourism Ministry from March 1998 to January 1999, when Katsav served as tourism minister. One rape allegedly took place in the minister's office in Tel Aviv and the other at a hotel in Jerusalem. Katsav will also be charged with forcible indecent assault against A. and abusing the employer-employee relationship. In addition, Katsav will be charged with lesser offenses against two employees of the President's Residence - H., whom he allegedly hugged repeatedly against her will, and L., whom he allegedly hugged and kissed on the neck against her will.

Katsav and Lusky have also been linked in another scandal that has been, so far, impossible to verify. Some information appears to have been scrubbed from the web. Make of that what you will. The allegation goes like this, which you can google yourself: that certain parties, including Moshe Katsav, used Lusky's organization to promote a penny stock fraud called UCSY or Universal Communications Systems. There's a lot of information on this floating around, mostly indymedia, but the links either don't work or are circular. That doesn't mean it isn't true, at least in part, just that I haven't had any luck verifying it. But it's really interesting stuff.

I can only verify that Lusky met Katsav, and Olmert, and Katsav is on trial for corruption and rape, and Lusky is sort of famous among Israelis for her work with IFA.

So, for all the talk about working alone and underneath the radar, Lusky has many connections.

And she is on the front lines in Haiti.

We do not fly in, since we work undercover! We mostly fly in on regular civil flights. We do not take supplies with us –– for two reasons.

Sounds like that MOSSAD assassin team that went into Dubai.

Looks like Gal Lusky has been to see the silicone fairy doc.

god, her own comments are enough to make you cringe.
sheesh!

we work below the radar,not only because we are Israelis??

what the hell does that mean?

Do you get the impression that, ah, these people are up to no good?
Because I do!

Hey, wanted to mention something about Puello in the kidnap case.

How is it that he is wanted by Interpol, wanted by Nicaraugua, wanted in the US for a bank fraud, and he is not already long arrested??

haha, yes there are a few... shall we say.... inconsistencies in the operating procedures. will be back with more on that.

hi pen, we just crossed as i answered greg.

um, yes! agreed with her comments. i have another post to do on this.

I have visited this site and got lots of information than other site visited before a month.