Richard Holbrooke is a Zionist Jew with a long track record of supporting Jewish causes.

As Richard Holbrooke, US Special Envoy for Afghanistan and Pakistan, accepted his latest assignment on January 22, 2009 from the hands of the foreign policy establishment that made him rich and famous, he boldly and graciously projected the same establishment's crimes onto the designated scapegoat.


Mr. President [Obama], Madame Secretary [Clinton], Mr. Vice President [Biden], you’ve asked me to deal with Afghanistan and Pakistan, two very distinct countries with extraordinarily different histories, and yet intertwined by geography, ethnicity, and the current drama. This is a very difficult assignment, as we all know. Nobody can say the war in Afghanistan has gone well. And yet, as we speak here today, American men and women and their coalition partners are fighting a very difficult struggle against a ruthless and determined enemy without any scruples at all, an enemy that is willing to behead women who dare to teach in a school to young girls, an enemy that has done some of the most odious things on earth.

And across the border, lurks a greater enemy still: the people who committed the atrocities of September 11th, 2001.


Stability in the vast resource-rich region sprawling between China, Russia and Afghanistan is crucial to the West as it lies on a new supply route for NATO-led operations in Afghanistan.

In Central Asia, according to security experts, the al Qaeda terrorists will assist the home grown terrorists to take advantage of the failed state opening. Failed states justify terrorism, right? People understand that hopelessness leads to radicalization, which leads to terrorism.

People also understand that terrorism justifies military expansion. We can't allow terrorists to go around beheading people. Military expansion makes for "stability," and stability is crucial to The West. Why? Because it allows the NATO operations in Afghanistan to continue. And these operations have been very effective in stopping terrorists.... oh wait.... actually...

Right around here official logic falls apart, since Afghanistan is really about controlling the incredibly lucrative illegal drug market. But of course, that can never be admitted. That's why Holbrooke can talk about the ruthless and determined enemies with no scruples who commit heinous crimes and behead people and murdered Americans on 911 etc. with a straight face (him not the enemies, to be clear), as he gets a promotion. 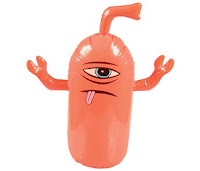 US Special Inflatable Envoy for Afghanistan and Pakistan
24" tall

So Holbrooke did a quickie tour of Central Asia around February 21st. It all seemed rather terse and rushed.

A reticent Richard Holbrooke completed a lightning tour of Central Asia on February 21, a trip designed to bolster regional support for NATO efforts in Afghanistan...The envoy was scheduled to travel to all five Central Asian capitals, though a trip to Ashgabat was cancelled at the last minute due to "scheduling conflicts," said an American Embassy representative there. After Astana, Holbrooke traveled to Georgia to meet with President Mikhail Saakashvili...It was difficult to discern the substance of Holbrooke’s various meetings, as his availability to journalists was limited. A press briefing originally scheduled to be given February 19 in tandem with President Kurmanbek Bakiyev of Kyrgyzstan was cancelled at the last minute....No press availability was even scheduled for Holbrooke during the Tashkent-leg of his trip....During a terse public appearance in Dushanbe, Holbrooke warned of the continuing threat of Islamic terrorists to the region’s security.

And then we heard about Iran capturing the terrorist Rigi, exposing his connections to the CIA, on February 22nd.


Moslehi said Rigi had been arrested on board a plane flying between Kyrgyzstan in Central Asia and the Gulf Arab emirate of Dubai. Television pictures showed him being taken off a plane in handcuffs, accompanied by four masked men.

"We have clear documents proving that Rigi was in cooperation with American, Israeli and British intelligence services," Press TV quoted the intelligence minister as saying.
"Dubai has a smeared hand in this scandal that shows the Zionist regime wants to turn the region into a safe haven for terrorists with the help of America and Europe," Moslehi declared, according to the official IRNA news agency.

Which all makes Mr. Holbrooke look like a....what's the word....a LIAR.

According to Wayne Madsen (via There Are No Sunglasses):


With the entire highly-vaunted U.S. intelligence community at his disposal, Holbrooke and his State Department and CIA team were forced to resort to dealing with Bishkek-Manas airport officials when their Iranian-Baluchi Jundallah guerrillas leader failed to show up in Bishkek on the Kyrgyzstan aircraft from Dubai.

...In an interview on Iranian TV, Rigi saus he was flying to Bishkek to meet an “important” American. The reason for the clandestine meeting in Manas was that the American would be easily spotted if he met Rigi anywhere else. At the time of the planned meeting between Rigi and the “important” American, AF-PAK Special Envoy Holbrooke was on a meandering journey in central Asia and Afghanistan “without a fixed schedule.” Holbrooke was in Dushanbe, Tajikistan on February 19.

Iran conducted the charade with the Kyrgyzstan airline in order to keep Holbrooke waiting nervously at Manas. Iran had already captured their prize of Rigi when the ISI, possibly after Rigi’s departure from Kuwaiteh or after he crossed into Afghanistan, took him under their protection and put him on the charter jet flight to Bandar Abbas. Possibly, ISI was at Spin Boldak and Rigi mistakenly believed the watch team was working for the CIA, when, in fact, they were working for the ISI, which had promised to turn Rigi over to the Iranians.

...Holbrooke and his party become concerned when Kyrgyzstan 454 is late. When the flight arrives, Holbrooke is told Rigi is not on board the flight and that two men were taken off the plane at Bandar Abbas. Holbrooke, clearly embarrassed and angry, departs Kyrgyzstan knowing the Iranians have nabbed one of the CIA’s top assets in the military operations being planned against Iran. Holbrooke, one of the most powerful American Jewish Zionists in the Obama administration, has egg all over his face, courtesy of a well-planned Iranian intelligence operation.

That is rather amusing.
Posted by A. Peasant at 8:38 PM

why every time you read about Alquaeda, you get the impression you are really reading about western intelligence ops.

i hear the little quack again...

Well Penny, that's what happens when you name a fake terrorist outfit after a toilet!