bring out your dead

1. Problem: Establishing a legal paper trail for the donation. Solution: Get the donor to sign a health care power of attorney, and work with hospitals that don't ask too many questions.

Organ donations fall under the Uniform Anatomical Gift Act, which emphasizes your rights to give your organs away after your death. Conveniently, the Act lets a third party decide what to do with your organs if you simply sign some paperwork before you die.

For instance, in Texas, the order of legal next of kin is as follows:
Can you envision some poor person who doesn't speak English, totally stressed out, signing a piece of paper that grants a Healthcare Power of Attorney to some stranger who promises to pony up a few thou for a kidney? Too easy.

Once the donor signs that paperwork, the hospital just needs to look the other way, which they do.

GRIFFIN: A few weeks after answering the ad with a promised pay off of $20,000, Rosen said he was flown to New York and hustled to Mt. Sinai Hospital where he and the patient he never met before told hospital staff they were cousins.

They didn't ask for family records or anything like that? ROSEN: No.

GRIFFIN: So, basically, you were just two guy that came in, declared yourselves as cousins --

GRIFFIN: Dr. Barbara Murphy is in charge of the hospitals kidney unit, she says screening is rigorous, but --

DR. BARBARA MURPHY, MT. SINAI HOSPITAL: We're not detectives. We're not the FBI. We don't have methods that they have at our disposal and people can on occasion deceive us.

So you see, if you look at it this way, the hospitals are actually the victims here, of deceptive people who use their facilities to procure illegal organ transplants, despite the "rigorous" screening. 'Kay?

And for the future, instead of addressing why so many people suffer from kidney failure (since that might lead back to big pharma and our poisoned food supply and environment), the experts will just keep pushing "presumed consent" so that doctors can take out whatever organs they need from any dead patient without even bothering to ask permission. And that will make everything go so much smoother.

2. Problem: Matching organ donors for wealthy clients. Solution: Databases are great, but blood type and some basic info will suffice. It's actually not that complicated. But!! Really fluff up the complexity so people will think it's impossible to run organ rings. Conflate the needs of the donor and the recipient, even though the donor will be given the bare minimum of care and cut loose ASAP -- if she or he even survives. Keep talking about the recipients and their end of the procedure.

Like this over-the-top pearl-clutching drama written in perfect academic bullshit style for the benefit of the terminally gullible:

In order for an organ transplantation to have any chance of success, a number of sophisticated medical procedures must be conducted to determine the suitability of various organs for transplantation and to permit a match with potential recipients. In particular, correct tissue and blood typing is critical to matching donor organs and potential transplant recipients. Crossing the blood group barrier from transplant donor to recipient can result in death. An equally important consideration is histocompatibility, which measures the extent to which a donor organ and a recipent match.
...In transplantation, it is vital to the survival and well-being of the recipient to identify and match the donor's HLA types. This can only be accomplished in a laboratory designed to test histocompatibility, and requires individuals with specialized laboratory skills to conduct the testing.
After the organs have been extracted from a donor, an extremely delicate and complex procedure that involves a transplant surgeon and support staff including an anesthesiologist, attending surgeons, and operating room nurses, the organs must be transplanted as rapidly as possible, typically by helicopter or airplane, to the hospitals where the transplants will occur. Before transporting the donor organ, special preservation solutions must be infused into it. Proper insulation and temperature controlled packaging including adequate ice or refrigeration must be used to protect the organ during shipment. Absolute sterile conditions must be maintained for the organ to remain viable for transplant.
Organ transplants must be accomplished extremely rapidly because the time that organs can survive outside the body is severely limited. Hearts must be transplanted within 5 hours, livers within 24 hours, pancreases within 6 to 12 hours, and lungs within 5 hours. Kidneys can survive the longest, but most surgeons will not transplant a kidney that was removed more than 48 hours ago.
Sophisticated surgical equipment and highly skilled medical personnel are necessary for a transplant to take place. At a minimum, one needs 20 individuals, including three members of a surgical team, one scrub nurse, one circulating nurse, one anesthesiologist, one perfusion technician, and one general function technician. For all transplant surgery, a large area needed for the operating table, instrument table, laboratory insturments, anesthesia equipment, monitoring equipment, spare supplies, gas sources, and personnel access.
In addition, in order to prepare for a kidney recipient's surgery.....
Thus, the daunting technical requirements of the transplant process make it impossible that transplants could occur clandestinely, as the child organ trafficking rumor alleges. ...the technical resources required could not be assembled outside of major medical centers.

When in fact, pretty much all they need to know about the donor is blood type (A, B, AB, O) and maybe size (child or adult). The recipient, of course, will be given anti-rejection drugs and receive the best care in the major medical centers. All this other itemized bullshit, like "temperature controlled packaging including adequate ice or refrigeration" (ie: a cooler?) -- not a problem. If money can fix it, it's not a problem.

For the future, when people cannot get to China for a nice fresh Falun Gong killed-to-order organ-donor prisoner, there might be some database available for the countless orphans of Haiti, and maybe Guatemala, Mexico, Thailand....and that should make everything go much smoother.

3. Problem: Getting rid of the evidence, the bodies. Solution: Well there are plenty of people walking around with scars from selling their kidneys. But what about those who are killed for their organs? What about those who are killed in snuff films? Where are their bodies? This is the question that needs to be answered. As long as those bodies remain disappeared, the guilty parties will continue to claim that "no credible evidence exists" of their murderous, despicable, loathsome organized crime rings. 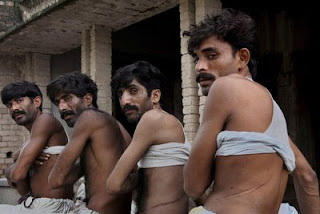 Indian men sell their kidneys
(source: 8 countries where human organs are harvested, via The Bloody Yellow House)
In Cuidad Juarez: "thousands of women have disappeared from the town, and hundreds of bodies bearing signs of rape and sexual mutilation were dumped on waste ground in the city. Thousands more have never returned."


Maria, which is not her real name, said the gang held young women in a house on the Mexican border until they were sold to the US as sex slaves. But she said they also dealt in children and told of on one occasion when the gang was contacted by a woman in New York. "She called and was very angry. She said she needed a seven-year-old girl and a nine-year-old boy - and she needed them in three days....I saw the Americans taking kids," she said. "A four-year-old and another boy, he barely walked, he was only about two years old. They took them to New York."

Some of these human beings go to New York. Presumably they are killed in New York. What happens to their bodies in New York? Hospital crematoriums? Cemetaries? How many ways do the corrupt have to get rid of bodies that never existed in the first place?


In British Colombia, witnesses claim that corrupt government officials operate The Musqueam Reserve as a mass grave and body dumping site since at least 1989. Where else might such sites be located? Could parts of military owned or privately owned land be used to dispose of the evidence of human trafficking rings in the US and elsewhere?

In Albania, former KLA fighters witness that Serbs were kidnapped and taken onto ships into international waters, where Western doctors harvested their organs and murdered them. Were some of the bodies dumped at sea, or were they all returned to land for burial?


Apart from burying the remains of kidnapped Kosovo Serbs who had their vital organs extracted for sale in the vicinity of their training, prison and death camps, KLA was also hiding bodies of these victims by burying them with remains of their fighters, like at Qafa Prušit and Morina (both on border between Serbia and Albania), as well as in the village and city graveyards throughout Kosovo province and Albania. (source)

In Palestine, the Israelis have used several techniques to hide the evidence of their organ stealing: keeping the bodies, or burying them in unmarked graves, or giving them to the families at night and under strict guard to be buried immediately in the dark. (also see here)

In Sri Lanka, does this look like the description offered by the US Embassy to debunk organ stealing in Problem #2... "an extremely delicate and complex procedure that involves a transplant surgeon and support staff including an anesthesiologist, attending surgeons, and operating room nurses..."? 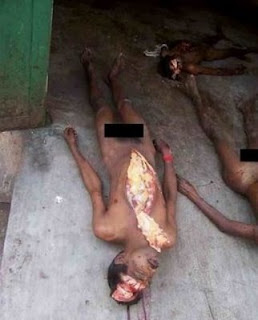 In Ukraine, people are sometimes pressured to sign a release at the morgue. Body parts are sent to a German company, Tutogen Medical GmbH, which uses corpses to make medical spare parts.


In doing so, they reuse almost everything the human body has to offer: bones, cartilage, tendons, muscle fascia, skin, corneas, pericardial sacs and heart valves. In the jargon of the profession, all of this is referred to as tissue. Bones and tendons, the parts that interest Tutogen the most, are subjected to complex processing. The company degreases and cleans bones, cuts, saws or mills them into the desired shapes, then sterilizes, packages and sells the finished product in more than 40 countries around the world.

In Japan, crematoriums raid the ashes of the dead for precious metals.

We know that if our earthly dwelling, a tent, should be destroyed, we have a building from God, a dwelling not made with human hands, eternal in heaven. So we are always courageous...
^^^^^^^ 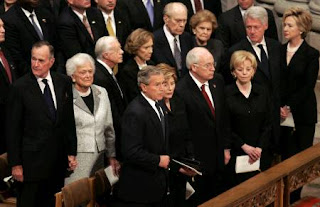 Oh come now. Why such long faces?
They don't look particularly courageous, do they.
Posted by A. Peasant at 7:20 PM