Aangirfan reported the other day on Venable's childhood.

Among the points made, he had a troubled home life and was afraid of his mother:
He behaved strangely at school:

He was an easy target for other children:

Today, not much has changed. According to sources, Jon Venables is still a terrified, out of control, easily worked-up stress-bag.

News of the World reports:


...Venables was last night said to be "tearful, cowed and terrified" by life on an isolation wing at a high security prison in the south of England. A prison source told us: "Venables is in a mess. He has never been in an adult prison and is extremely anxious. "He is being given sedatives to calm him down and has been prone to angry outbursts and tears of despair."

...He was discreetly rushed to a jail we can't identify under an assumed name and false charges. He was immediately put into solitary confinement in his own cell with CCTV for 23 hours a day and put on suicide watch. The cell had only a bed and a TV to watch his favourite soaps Coronation Street and EastEnders. With no chance of going to the dining hall meals were delivered to his cell. Venables' day began at 7am when he was woken and handed breakfast of boiled eggs and toast. Main meals were mostly pizza and chips, chicken with rice and sugary cakes for dessert. Then he was escorted to the shower block by a guard only after the other inmates had started work at 8am. In afternoons, he was taken on his own to the exercise yard for an hour, walking and chain smoking using a lighter borrowed from a guard.

...He was whisked to a new jail and booked in under the name of a genuine prisoner whose file said he had been charged with rape. After psychological tests he is now off suicide watch and been given more freedom to mix with other inmates. He is not allowed posters on his white cell walls but has a picture of a sexy lingerie model pinned to a notice board.

In a negative sense, enabling is also used in the context of problematic behavior, to signify dysfunctional approaches that are intended to help but in fact may perpetuate a problem. A common theme of enabling in this latter sense is that third parties take responsibility, blame, or make accommodations for a person's harmful conduct (often with the best of intentions, or from fear or insecurity which inhibits action). The practical effect is that the person themselves does not have to do so, and is shielded from awareness of the harm it may do, and the need or pressure to change. It is a major environmental cause of addiction.

It would seem, that as Venables watches his soap operas and has his sugary cakes delivered to him in prison, and has the guards bring him to shower after all the other prisoners go to work (I guess his is exempted from work), while under the relaxing effect of tranquilizers, or chain smoking or looking at his smutty picture of a lingerie model, he remains "tearful, cowed and terrified" of what might happen to him should his personal security bubble get penetrated. Not that I am totally unsympathetic, because to be honest he is the product of totally inept parenting and guardianship for his entire life. Take it from where it comes.

What is the lesser scandal? The negligence and incompetence, or as they call it here, a "supervision scandal." 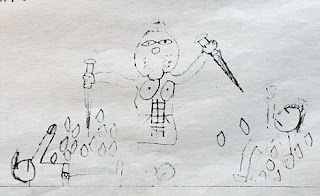 Venables drew this picture weeks BEFORE murdering James Bulger.
Is it a picture of Ritual Abuse? What kind of costume is that figure wearing?
What had he been exposed to?


...Critics believe the cover-up has been ordered to prevent any further embarrassment for ministers over the Home Office's supervision of one of Britain's most notorious killers.

But despite ministers' refusal to come clean:
Probation officers and police are trying to establish what contact he has had with children since his release from a secure unit in 2001 and how Venables came to be in possession of the appalling images.

Their worst fears are he could be part of an internet paedophile ring which traded sick images of children 'to order'.

...But there are already fears that because of sensitivities around the case, any trial could be subjected to unprecedented reporting restrictions, meaning the public may never know precisely what happened and whether the authorities could have monitored him more closely.

The terms of his parole imposed strict conditions on his contact with youngsters but there are fears that Venables may have deceived his probation handlers. If that is the case, it would constitute a major supervision scandal which could engulf those who supported his release from custody nine years ago and the Home Office unit which had responsibility for over-seeing his 'rehabilitation'.

To make matters worse for the authorities, Venables keeps talking.

Sources said Venables was 'psychologically stressed' before he was recalled to prison, to such an extent that he began revealing his true name to people. It was claimed that he descended into a 'persistent state of self-disclosure' in which he felt compelled to tell others that he was one of Britain's most notorious murderers.

He looks, for all the world, like an accident waiting to happen.
Posted by A. Peasant at 1:10 PM

holy shit, he drew that picture before he committed murder.

I have to be honest, I have never seen a picture drawn by a child, like that!

Generally, all the ones I have seen, have been much happier.

That kid had to have been seeing some weird, seriously weird shit.

agreed. i am trying to understand the criss-crossed straps. it looks like sado-masochist stuff, also the head looks like there might be a fetish mask. 10 year old boys don't normally know about that sort of thing, leaving aside the knives and dying bodies, which granted any imaginative boy might dream up.

Fascinating. I wondered if pedophile rings are involved somewhere.

yes, we can't go too far without tripping over one. if Venables has a personal history of SRA, and if he keeps talking about his past, i would expect that the extremely difficult task of keeping him safe will experience a failure.

Too horrible. Stay healthy, friends of children, and of liberty and justice for all.