a culture of "having a quiet word"


'Some of the details are just heart-rending. Of course the question is how on earth did something like this happen without someone noticing?' - Nick Clegg
Oh sorry, that's regarding a DIFFERENT appalling abuse scandal, which broke in November 2008. 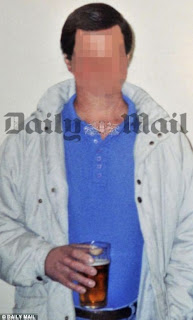 clean cut, nice clothes, enjoying a drought beer at the pub
no doubt having a laugh about his daughters who keep getting pregnant
no doubt failing to mention that he rapes them every day
Daily Mail: The British Fritzl, 11/27/08
Not to worry. The authorities "overlooked" the abuse for TWENTY EIGHT YEARS.

A staggering 150 chances were squandered to save two sisters kept as sex slaves by their father. He made them pregnant 19 times  -  under the noses of social workers and other professionals who failed to halt the abuse for 28 years.

The man's sister-in-law last night claimed that he carried out the horrific abuse to milk the child support system. She accused the jobless 56-year-old of skimming thousands from the state by taking for himself the benefit money paid for the youngsters  -  currently worth £31.25 a week per child.

But whenever they were asked about their injuries or the father of their children, the terrified women denied everything in fear their children would be taken away.

What health care and/or mental health professional could possibly predict that abuse victims would deny the abuse and protect their abuser, and especially so in order to protect their own innocent babies?

ARE HEALTH CARE AND/OR MENTAL HEALTH PROFESSIONALS AND/OR SOCIAL WORKERS EXPECTED TO KNOW SUCH THINGS, SUCH ARCANE KNOWLEDGE?

Police believe the sisters, whose mother fled the home when they were young, were raped hundreds of times. The domineering father, who cannot be identified for legal reasons, admitted 25 rapes and four indecent assaults at a hearing last month.

...Mr Clegg said he wanted to know what medical professionals, social workers and schools had been doing over the last 20 years. Yesterday, Sheffield social services refused to answer key questions, hiding behind the announcement that an independent Serious Case Review has been set up to find out what went wrong. Lincolnshire County Council's director of children's services, Peter Duxbury, expressed 'sincere sympathy' to the victims but insisted: 'Since these events took place, thankfully our child protection systems have improved a great deal. 'Significant improvements have been made to ensure the safety of children in Lincolnshire.'

More on this sociopath rapist here, if you can stand it.

Now to answer the question, how did he get away with it?

Some people say that the authorities get duped and tend to "look the other way."

Loathe to criticise  -  still less to interfere with  -  the lives of fractured and failing underclass families, the official bodies charged with protecting the most vulnerable in our society simply looked the other way....The point is clear: time and again those who should have been in a position to stop this abuse looked the other way, or sat on their hands. Why? Because they refused to contemplate the unpalatable, politically incorrect truth  -  that some families are not just 'struggling to cope in challenging circumstances', to borrow PC parlance, but are harbouring true evil in their midst.

Do you have it? These social workers and doctors and police officers are just fine regular people, just like yourself, and they've been duped by these loathsome criminals, and they 'looked the other way' for twenty-eight years, over a hundred different authorities, because... well hey, you know what they call it, right?

YES IT'S REGRETTABLE, BUT THEN AGAIN, WHO COULD HAVE PREDICTED?

Today the authorities APOLOGIZE for their TWENTY-EIGHT YEARS of, REGRETTABLY, LOOKING THE OTHER WAY.

Chris Cook, the independent chair of the Lincolnshire safeguarding children board, said: "We are genuinely sorry. We should have protected you. This is a tragic and complicated case. The man responsible, who intimidated and frightened his family, was convicted of multiple counts of rape and is serving a life sentence."

Sue Fiennes, the independent chair of the Sheffield safeguarding children board, said: "We want to apologise to the family at the heart of this case. It will be clear that we failed this family. This report will not make comfortable reading for any of the organisations concerned with the family. Lessons are being learned by the agencies involved."

The 39-page executive summary of the serious case review, written by Professor Pat Cantrill and spanning 35 years, found numerous opportunities to intervene "were missed individually and collectively". Cantrill said a culture of "having a quiet word" contributed to failures to help the family.

"We have got to learn from these serious case reviews," she added. "You are aware, as I am aware, that there are a number of these serious case reviews that happen, and we always don't seem to learn from them. It only really needed one person with tenacity to keep pushing this and pushing this, and we might have had a much earlier recognition and action being taken."


The review made 128 recommendations for improving understanding, practice, procedures and training into intra-familial abuse, including eight national recommendations. It also recommended improvements in sharing information, record-keeping and support for professionals. All the recommendations have been implemented or are being implemented.

Oh goody. I'm sure all that record-sharing will keep the children safe now.

Details of the 39 page report, which reviewed the twenty-eight years of missed opportunities, include:

This man took pleasure in abusing his daughters. He beat them, puched, kicked and threw them around, he held them next to gas flames when they resisted, burning their eyes. He paraded them around in public, taking them into the pub with him and giving them alcohol, and treating them like his wives. He threatened they would lose their babies if they told.

So, WHY AGAIN did everyone miss this for twenty-eight years? Supposedly, the excuse is, that he's a clever bloke who managed to fool a lot of people, even trained authorities. Everyone is so gullible, see? Even trained authorities, who should know all about abusers and sociopaths and victims and how they work the system. But since they are all just nice human beings, just like you and me, and they're a little gullible too, just like you and me, and sometimes they just looked the other way. Hey you'd probably do the same thing, right? Who are we to judge, right?

The alternative explanation being that they knew, and they just didn't give a shit, or if they did try to stop him because they did give a shit, there was always someone higher up the food chain who just didn't give a shit. And there was nothing they could do, see? Because of the corruption. People in a position to do something just don't care. So nothing happened for twenty-eight years, except that these two girls and their brother lived through hell and had their lives and innocence and psyches utterly ransacked.

But the father... his identity is protected.

And in his jail cell, he shows no remorse. Perhaps the guards even bring him sugary cakes for dessert.

And the authorities make their apologies and implement their recommendations and we all go on to the next story.

Sociopaths know that it's SO EASY to get away with this stuff.

All they have to do is conduct a review, make an apology, and implement a few recommendations.

And people will accept that. Because these authorities... we know that they are just human beings, and we all make mistakes. And we want to be given the same benefit of the doubt should anything go wrong for us.


I strongly recommend, I beg actually, that my fellow human beings stop being so gullible.

The Psychopath - The Mask of Sanity

Imagine - if you can - not having a conscience, none at all, no feelings of guilt or remorse no matter what you do, no limiting sense of concern for the well-being of strangers, friends, or even family members. Imagine no struggles with shame, not a single one in your whole life, no matter what kind of selfish, lazy, harmful, or immoral action you had taken.

And pretend that the concept of responsibility is unknown to you, except as a burden others seem to accept without question, like gullible fools.

Now add to this strange fantasy the ability to conceal from other people that your psychological makeup is radically different from theirs. Since everyone simply assumes that conscience is universal among human beings, hiding the fact that you are conscience-free is nearly effortless.

You are not held back from any of your desires by guilt or shame, and you are never confronted by others for your cold-bloodedness. The ice water in your veins is so bizarre, so completely outside of their personal experience, that they seldom even guess at your condition.

In other words, you are completely free of internal restraints, and your unhampered liberty to do just as you please, with no pangs of conscience, is conveniently invisible to the world.

You can do anything at all, and still your strange advantage over the majority of people, who are kept in line by their consciences will most likely remain undiscovered.

lol, thought about this one today, and no way! I thought jihad jane was the way to go.

I mean, give me a break.

You hit the nail on the head, they missed this, because they wanted to.
They either didn't care, couldn't be bothered or like you said, some defective higher up told the footsoldiers to forget about it.

I mean after all apeasant, it is just a few poor kids, you know impoverished kids.

yeah. this frosted my fucking cupcakes, i have to say.

Hell of a think tank you have going to here. It is too damn easy for the psychopaths to rise to the top, and the consequences are horrendous. Thanks for all the factual and pictorial presentations, dear. I will spread the word, although so many would rather keep their mouths, ears, and eyes closed re what is really important in society -- the evildoers that rule, instead of protect, them.

hi Marycatherine. thank you for reading, for having the courage to read this stuff. it is awful, but only by getting informed can we ever stop it. just imagine what so many innocent people go through, and they suffer in silence and obscurity. and as you correctly point out, the people responsible are protected by our unwillingness to look at and process this difficult information.

we just have to get over it. people are waiting for us to witness for them so that it can stop. it stops when there are enough witnesses, so many witnesses that the responsible parties can't hide anymore.