The question came up. Are Chabad Lubavitchers also Sabbateans?

The short answer is: sure does look like it, though (surprise surprise), it's a bit of a hairball to sort out, historically speaking.

Chabad history stretches back to the same time as Jacob Frank (late 1700s), using the same books (Cabalah, Talmud), and philosophy (mysticism), and coming from the same area (The Pale, established 1791)...but with different rabbis.

The Pale of Settlement
As best I can tell, Chabad plays the role of the "good" alternative to those "bad" Sabbateans, that don't even exist anyway pfft. Gimme a break.
^^^^^^^


Fast forward a couple hundred years...Chabad is literally forming a new religion around their dead rabbi Schneerson, who died 15 years ago, and they are modeling this new religion, Schneersonism (that rolls right off the tongue, doesn't it?), on... wait for it.... Christianity!

Because hey! That's all it takes! The right business model. Finally! Why didn't they think of this sooner???
Chabad-Lubavitchers Break Away Religion of 'Schneersonism' Growing
(http://www.alfassa.com/schneersonism.html)

(January 3, 2010) - They stand on the bustling street corners from Los Angeles to New York City and all places in between. While distributing literature to the passersbys, they joyfully declare "the messiah is here- the messiah is here." But these are not the stealthy anti-Jewish Christian missionary organization Jews for Jesus, these are hasidic Jews who now follow a new upward developing religion of Schneersonism. This break-away religion of Schneersonism, a modern daughter of Judaism not unlike Christianity or Islam, is a new and developing religion-a new and genuine religion.

And evidently the author finds this pretty funny, because Christianity is a joke, see?

About 2000 years ago a group of Jews acted exactly like the Schneersonists. After their leader (Jesus) died, they worshiped his dead body-and have not stopped since.

And yet, he goes on to say (again), that Schneersonism is a new, distinct religion, and spreading to "anyone who will listen."

And this is not only a U.S. phenomenon, Schneersonists are across the globe spreading Schneersonism with anyone who will listen, this includes to the non-hasidic Jews. When people make contact with these men wearing black suits and black hats and immediately conclude they are traditional hasidic Jews who dress and follow the traditions of their European ancestors, what they don't know is that they are actually making contact with men that are at the genesis of a new religion--they are speaking with people that whether they know it or not, are the founders of the beginning of an entirely distinct religion, one based on the worship of a dead human being, Rabbi Menachem Mendel Schneerson.
Rabbi David Berger, Ph.D., professor of history at Yeshiva University and visiting professor at Harvard and Yale, says that the Lubavitch who feel Schneerson is the messiah, are virtually identical to those of the early Hebrew-Christians. Schneersonism is growing closer to Christianity and distancing itself from Judaism - why - because Judaism has no place for messiah worship or the worship of a dead man. It is categorically anti-Jewish to worship a dead man.

He expresses alarm and claims that the powerful Jews are "afraid" to speak out about this. Also, the Lubavitchers behave in ways that make it hard to tell who really believes what.


Most Jews don't understand how over at least one dozen false messiahs have come and gone throughout Jewish history, nor the damage they have done to the Jewish people. The large established Jewish organizations, most of which have Chabad members among them, are afraid to speak out of this topic-they won't go near it.

The problem is you can no longer tell which Lubavitch hasidim are Schneersonists and which are not. 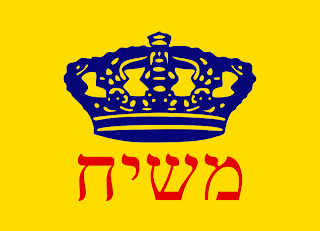 a Chabad flag, that word there means "messiah"
But they're serious. And they have their pins and flags and posters, and they're putting them up all over Brooklyn.

...Posters of Rabbi Schneerson are plastered all over Brooklyn New York with the word"messiah" posted underneath his image. This writer attended Shabbat at 770 Eastern Parkway and saw men calling for the messiah. There were men wearing the yellow "messiah" flag lapel pin, the symbol of the Schneersonists. ...To be sure, the "World Headquarters" of Lubavitch is a center for Schneersonists who worship the dead rabbi and who have made him the center of their new religion.

And of course, all the white vans. Nice touch. And if you watch the video to the end, you have to wonder, why after all that happy happy singing flag waving dancing handing out pamplets et cetera, do they end, quite ominously, with a tank firing? I guess they're dead serious.

That clears it up, I thought this was a new Wyatt Earp fad. I'll be your Huckleberry!

FB
Hi AP, was it worth my stirring up a storm in a teacup over such a small matter at Nobs place? Who knows? I think I will register a blog name anyway, what the hell but I do appreciate you accommodating me here. If it doesn't sit good with you then just go back to the original settings. You are sure right that the places we hang around are not “Today I cleaned the bathroom and then I baked a cake” type sites. So as not to be a cad by getting you to change your settings and then doing nothing, I recovered yesterdays effort from the archive and stuck it below but reading it through again is it of such importance? I guess it is just an endorsing comment and that is ok.

In the early 90's I went to the Salerno region of southern Italy to prospectively buy a food processing plant on behalf of a client. During a meal one day I casually asked the seller if he ever had any trouble with the mafia. He told me that no one ever has trouble with the mafia, you just pay what they ask and then build that amount into the price like an extra tax, and that's the way they view it.

Most law abiding citizens (LACys :-) associate the mafia with Italy but as you point out times have moved on and national boundaries have not stood in the way of their globalist ambitions. In fact the crime overlords have achieved in a couple of decades what G20; GATT; NAFTA and all the rest of them have been treading water with for years.

There is a body of opinion (no pun intended), that says that JFK was done for by the American mafia working hand in glove with the CIA and that these same people now have control of the Pentagon. That's over 50% of all US tax dollars. That is no longer hijacking a truck load of hootch anymore, that is seriously serious.

It is always worth remembering though, that the meek shall inherit the Earth (if it is alright by you).

hey FB,
thanks for the chuckle and don't worry about changing the settings. i thought about it, and it's not a big deal. i appreciate your story, very interesting.

the other day i was reading something, can't put my hands on it at the moment, but didn't it come out that the chicago mafia was ultimately run by meyer lansky? when you peel the onion, it always ends up with the same few people.

not to say there aren't factions battling, but they seem to be so many proxy wars.

as for the meek inheriting the earth, of course that is alright by me.

whoops, I missed the dust up at nobody's.

anyway, I was thinking as watching this video, where is the outrage?
What if muslims did this?
Could you imagine?

Of topic, but, it is one thing that crossed my mind.

How bizarre, I mean the whole thing...

it's not off topic, you are absolutely right. it's outrageous.

no dust up at nobs, we were just discussing commenting policy. haha, talk about off topic...

lol, Yeah, I saw that after I left here, I thought, gotta check it out.

I do not get all this religious stuff, it took me so long to break free of it, and I do not see the attraction.

same here Pen. it's used against people. i'm writing about it because i think it's helpful for people to understand the truth about religion.

i mean, how else do you break free except by learning the truth?

and the truth as i'm learning it, is that the sabbateans have infiltrated catholicism via the jesuits (for starters), so that would be a wake-up call for all those good catholics, of which i was once one.

and that leads directly to satanism in the catholic church, which explains some of what we're seeing today in the news. also, i know of it definitively from a most impeccable source. so it's a worthy thread to pull on in my estimation. it's all connected basically...that's why i spent the time on some of this (seemingly) arcane stuff.