scrambling their little brains just as fast as they can

It has been speculated that Jeff Gannon is Johnny Gosch, who as child was reportedly kidnapped and brainwashed by the US military. (Johnny Gosch, Jeff Gannon, Hunter Thompson.)

(I'll just warn you right now, this is a deep rabbit hole if you're not prepared, and some of this is very, very disturbing reading. But then again, who will witness for the abused and the murdered, aside from their abusers and murderers, who laugh at them? That's the only reason to read it, as a witness. It's the one thing we can do, and it would actually work to stop the evil, if enough people could bring themselves to do it. Food for thought...)

The question has come up whether Jeff Gannon is the same Johnny Gosch who was kidnapped while delivering newspapers in 1982. This suggestion makes people wonder about Hunter Thompson's suicide, for one thing, because Hunter Thompson was named as the director of a snuff film described in detail by one of the child victims.

You can read part of the testimony at the top link (aangirfan).

But on the way to scrolling down, you'll first come upon this other story about Disney. And for your convenience, you can also read it here.

The number is a well-guarded Disney and Comcast secret.

I received one cynical e-mail saying, "It was a sanctioned technology experiment as the parental controls were overridden. That's why there's no government action." Who will be prosecuted for deliberately and/or recklessly brutalizing these wide-eyed youngsters?


Statistically speaking, some percentage of these small victims will eventually act out on themselves, on their siblings, neighbors, friends, or families and blame themselves!

...Under the circumstances, I understand why my correspondent suspects that the May 1 "accident" was actually a test run by Comcast, Disney – or both – to induce small children into pornography addiction.

The article goes on to limn out the huge pedophile problem at Disney.

So imagine my shock when today I read that something very similar has happened Tuesday in North Carolina. Pornographic content aired in the corner of the kids channel menu from about 6:15 to 8:15 a.m. in parts of Cary, Garner, Morrisville, Wilson, Goldsboro, Willow Spring and Johnston County. The number of children involved? Secret.

It used to be that plonking your children before the TV to watch an innocent and harmless parade of child-friendly specialist shows instilled a sense of safety and trust in busy parents. Not anymore.

More pointedly, thousands of shocked parents in North Carolina may be somewhat less inclined to leave the room from this point forward after pornographic content was mistakenly broadcast on Time Warner’s ‘Kids on Demand’ and ‘Kids Preschool on Demand’ channels this past Tuesday.

The misplaced content, which belonged to the Playboy Channel, presented its wide-eyed viewers with naked women engaged in raw sexual conversation – a far cry from the stream of previews for kiddie shows that was supposed to be airing at the time.

And, adding insult to injury, network operator Time Warner Cable apparently left the adult content running for two hours, even though it received a surge of phone calls from concerned and outraged parents soon after the clumsy on-air snafu.


TWO Hours. That should be enough time to really scramble a few innocent children's psyches hmm? Oh, oopsie, "technical glitch." Sure. Check out the "regret."

“We’re very, very sorry it happened – we know parents are concerned,” said Time Warner Cable spokesman Keith Poston on local news station WRAL. “It was a technical glitch and unfortunately it hit at the worst possible time on the worst possible channels.”

Although unlikely to scrub the minds of any young children exposed to the pornographic content, Time Warner Cable has said it will never allow such an error to happen again.

You know whose fault it's really going to be, right? The parents of course, for letting their children watch teevee in the morning when they should be getting ready for school like Beaver Cleaver did sixty years ago (read the comments). 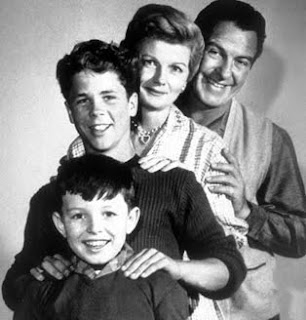 Get ready for school, kids!
C'mon parents! You can keep those kids away from the teevee and their ipods and their laptops and their cell phones and all that crap culture satanic music and pornographic advertising swarming them every second of the day, right, thanks to all that sophisticated marketing, right? What?? You say it's hard? And you have to go to work???
OH YOU FAILURE, YOU!
Posted by A. Peasant at 10:25 AM

Peasant you are rocking. I haven't read all this yet but I will get started. I was still commenting on the pill pusher piece. Left this comment for you on that one.

Right on Peasant. When in doubt grab the Jethro Kloss book and whip it out!

"I was switching doctors once and explaining to one that I took my wife off one prescription. He said hold it wait a minute you took her off? You must understand I am the doctor here. I looked at him and said I don't think you are going to be able to help us and we walked out of the place. One other doctor said she need an MRI and I said there is not going to be a day like that. Nobody knows the effects of barium which penetrates the blood brain barrier, no studies have been done on it. She said you will have to find another doctor then. We said consider it a done deal."

haha, saw your comment, thank you dubs. be sure to read these links. just incredible.

Best to switch off the TV.

It's not called a TV 'programme' for nothing!

Our 7 year old boy has recently had his TV time slashed. We thought it would be difficult, but it's turned out to be quite painless. Plenty of outdoor activity, reading, and doing creative stuff balanced with a more moderate intake of programming (of our choice - I know, aren't we tough!!?)

thank you Edo, very much. i find it's a lot harder to limit teevee in the winter when we're trapped inside so much. also it gets a little trickier as they get older (sigh). but that complaining aside, yes, the teevee really sucks and i usually make fun of it when i have to watch some haha, which is not much.

Left a link to you over on Veterans Today. They are coming around over there.

I watch so little Teevee when I see the rags on the stand at the super market, I don't even recognize the faces of the supposed stars and glamor people we are supposed to emulate. Most of them I never heard of except Jenna, Brad and Angie. This one has been going on for what seems decades. I could care less if the three of them flipped on LSD and drove a semi trailer into the Grand Canyon.

Brad is Cheney's cousin by the way.

i was just at VT and read the post and comments. it's good that some more people are finally starting to get it. i would think that once the veterans come over as a group, i would expect that to help. meanwhile aangirfan has noted the recent divide that seems to be opening up between our bestest friends ever and the US military, here:

Peasant they are all related. Most of our leaders for many years are cousins of the elite, Clinton Obama, Cheney. I think Nixon and Reagan were two of the few who were not.

It is a country club run for the London Corporation. The illusion the British were run out is an illusion. The masons took over soon afterwards and fashioned the high sounding rhetoric about freedom and rights. That is until they could kill enough presidents who wanted real money like Jackson and Lincoln all the way up to Kennedy.

It ain't healthy for a president to talk about abolishing the federal reserve.

Kind of like it wasn't healthy for William Colby to be discussing Omaha with DeCamp. Colby told him this is bigger than you realize. It must have been, Colby as you know was found floating in Chesapeake Bay, drowned in a "canoe accident."

I meant to say cousins of the crown itself. Even Pat Buchanan is a distant cousin of the queen. So is Kerry.

When they talk about the class system in Britain they are not bsing. You are either related to the queen or a mason or you are on your own. The UK police according to Rixon....you can't even reach supervisory level unless you are masonic.

"Demons in the Outfield;Pedophilic baseball" a video by Lenon Honor goes into some detail of a Disney film about a baseball team and 2 boys who support the team.

It's not too long

thanks dubs and aferris. i'll try to get a peek at these.

Hey Ap,nice job, and know, that is not an error, no way, no how.

made me think of the most recent 'bad judgement' move in Georgia, the phoney story of the attack on Georgia by Russia.

Just like this a total psy-op. Those kinds of incidents are not accidental, they are completely intentional.
Done to damage the psyche, throw one of balance.
So to speak.

But, most definitely not a mistake.

thanks pen. and no doubt "next time" it will be *another* cable company that makes this mistake. in fact there may be other accidents like this that have already happened and they just don't get connected, so each one looks like a mistake.

Hey AP, I'm not only late to the party but Aangirfan stole my line. Me shaking fist in a vaguely Scotlandwards direction.

Otherwise good work. And not forgetting that the ubiquity of DVD's makes the rating system pretty much superfluous. I had a fourteen year old describing the merits of Saw and Hostel to me the other day. Never mind 'R', I'd put those at the extreme end of 'X'. Anyway between DVD's and the internet it's open slather now.

plus the video games. have you got a load of those? unbelievable.

even that stupid sims game with the jibberish language, i find it so creepy. then the violent games, of course everybody knows about those.

the video games are pretty psycho. I don't buy many DVDs. I stick with the old Yanni types. Doesn't anybody listen to Yanni anymore?

I recommend the Black Lodge Singers if anybody likes Indian drums as well as Arvil Bird. There is no propaganda there. Just some good old ancient vibration beating the cobwebs out of your head.