In Russia, Putin deals with the Jewish oligarchs at least partially in the open. Sometimes he cooperates with them, and other times he opposes them. But in any case, there's no love lost between Putin and the oligarchs.

Who is better served by their leaders, the Russian people or the American people?

It looked to me that Russia helped along the recent Kyrgystan changes. Perhaps Russia did. Putin certainly had good reasons to want the Bakievs out. But Aangirfan recently pointed out that Roza Otunbayeva, the new Kyrgystan opposition leader, is a CIA 'asset.'

People Power is usually organised by the CIA.

Reportedly, in Kyrzygstan, the CIA toppled President Akayev in 2005, and President Bakiyev in 2010.

In 2009 the Kyrgyz government of Kurmanbek Bakiyev announced that it was evicting US forces.

It changed its mind when the USA offered it $60 million to reverse its decision. (AARAN AARDVARK'S GARDEN OF EARTHLY DELIGHTS - A Blink in the Eye ...)

But the CIA may have lost trust in Bakiyev.It is possible that the CIA used people power to topple Bakiyev in April 2010, and put Roza Otunbayeva into power.

Perhaps Russia is just going with the flow. Or, maybe Otunbayeva works for the Russians too. Who knows. Foreign policy is evidently nothing but deception, all day long. God knows no one seems to work for the actual people they supposedly represent.


According to another source, Otunbayeva made a private visit to Israel in September 2005 to convince an unnamed oligarch hostile to Russia to support Felix Kulov against Bakiyev. He could not be convinced that Kulov is a "real anti-Russian figure." After this meeting Otunbayeva joined the opposition. (Links removed, click through for additional links.)

Once in September of 2005 she lost the post of Minister of Foreign Affairs in the first "revolutionary" government of Kyrgyzstan, Roza Otunbaeva made a private visit to Israel. Here, she met with a large Russian-speaking businessman , known for his hostility to the Kremlin and Russia's "hegemony" in the post-Soviet space.  Otunbayeva tried to convince Israelis that his friends in the West to support the then Prime Minister of Kyrgyzstan Felix Kulov in competition with President Kurmanbek Bakiyev.  This portal IzRus said one of the witnesses of those contacts with the Israeli side.

According to him, Otunbayeva tried to convince his interlocutor that the forces interested in establishing the pro-Western democratic regimes in the CIS and neutralize Russian influence there should be counted on Kulov. However, her Israeli counterpart, as well as his comrades in England were not convinced that Kulov is a "real anti-Russian figure," and denied him support.

According to the source portal IzRus, the Israeli side, there were several witnesses to this meeting.

Just at that time, having lost the post of Minister of Foreign Affairs, former ambassador to the United States and Britain Rosa Otunbayeva moved into the ranks of the opposition. In March this year she publicly criticized the government of President Kurmanbek Bakiyev in connection with financial advisers - Russian-speaking Jews from the United States.

Notice the connections to the US and England, as well as Israel of course. This information supports the contention that Otunbayeva is a CIA asset.


Click here to see some pictures published in the Telegraph UK of the Kyrgystan riots. 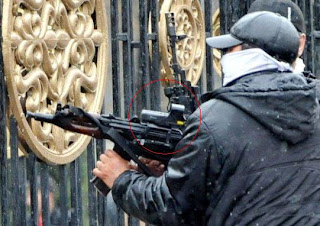 A Kyrgyz opposition supporter fires an automatic weapon near the main government building during a protest against the government in Bishkek. Picture: AFP/GETTY

click to enlarge
According to this editorial at Oriental Review, that holographic weapon site on that opposition fighter's rifle could only have come into Kyrgystan on a license by the US Departments of State and Commerce.


The HWS (holographic weapon sight) attached to the AK gun in the hands of an opposition fighter is the product of the US L-3 Communications EOTech Corporation, 500 series, retail price 600 USD each one (four average monthly salaries in Kyrgyzstan). According to the International Traffic in Arms Regulations (ITAR) of the USA, the commercial sales and exports of this equipment requires a license issued by the US Department of State and Department of Commerce. These models were not officially delivered to Kyrgyzstan or Russia. Hence this AK with an advanced HWS could NOT be used by a regular Kyrgyz special unit officer and then captured by a protester at the ‘battlefield’. The Telegraph snapshot clearly indicates that the ‘pro-Russian revolt’ in Bishkek was surprisingly supplied from a US military site in Kyrgyzstan or, perhaps, Afghanistan.

So the only pending question is the following: who is the dominant ‘third party’ in April events in Kyrgyzstan? Whether international narco-mafia is subject to the orders from Washington or maybe in reality the American administration is just a docile servant to those who generously invest into the US political campaigns?

been under the weather lately, so haven't been around. still not feeling up to snuff and sniffling....sore throat and yuk!

I see you have been busy,go girl!

I thought it looked like some kind of skull....
weird

I will try to catch up later..

Thanks for the mention!

just trying to make sense of the senseless... not sure how it's going but hey. ; D

Aan, well thank *you* for catching that CIA angle with otunbayeva. still reading up on it. looks like both moscow and the US are jockeying behind the scenes to see who can exert the most influence.

I read that also. It sounds like Roza did a stint in Georgia also. Spending time with tie chewer can't be good.

hi dubs. i saw that saakashvili wasted no time blaming the kyrzyg uprising on russia.

"Despite [Moscow's] denials, according to the information available for us, it is absolutely obvious that Russia is roughly interfering with Kyrgyzstan's internal affairs and is trying to play geopolitical games at the expense of the Kyrgyz people," President Saakashvili's spokesperson, Manana Manjgaladze, said on April 8.

"We call on all the forces, including those who are in control of the capital [Bishkek] not to allow outside forces to use you against the fundamental interests of the country," she added.

However, on the same day, Georgian Foreign Minister, Grigol Vashadze, said while speaking at a joint news conference with his Finnish counterpart in Helsinki: "I do not have any facts, which could possibly prove any foreign involvement into those [Kyrgyz] events.”

There was one other thing on Burgenmeister's mirror site mentioning there was no volcanic plume over Europe. It was clear skies over Poland and the Euro pols did not show up for the funeral. Hmmm

There were some protesters there calling murder also.
It probably wouldn't have been a good media day for the them. You have to wonder if they are even becoming nervous over some of the stunts being pulled.