setting up the spotlight

Turkey, Brazil and Iran have just reached an agreement about nuclear fuel swapping. The decision allows Iran to swap 1200 kgs of their Low Enriched Uranium (LEU) in exchange for 120 kgs of Medium Enriched Uranium (MEU) that can be used to manufacture isotopes for medical purposes. Turkey brokers the swap. The good news: this agreement will make it much harder to justify an attack or sanctions on Iran. The bad news: it makes a false flag more likely. See this analysis by Damian Lataan, briefly:

There are other options, however. One of these is for Israel to simply attack Iran ‘unilaterally’. Of course, such a strike would be anything but ‘unilateral’ since Israel could not possibly strike Iran without the US being complicit in such a strike. The ordnance and fuel for such a strike would have to come from the US and the ordnance and fuel required to fight the resulting war with Hezbollah and Hamas would also need to come from the US. Once Israel has made the first strike against Iran, the US would then be compelled, albeit with a massive show of faux reluctance, to support Israel by launching attacks against Iran designed to prevent Iran launching any retaliatory strike against Israel.

While the US is then dealing with finishing off Iran, the Israelis would then be free to massively attack both Hezbollah in Lebanon and Hamas in the Gaza Strip followed up by invasion and occupation, all while the worlds eyes are on the ‘main event’ which is the US bringing Iran to its knees.

Another option would be for the Israelis to somehow provoke, possibly by some false flag event, war with Hezbollah and/or Hamas which they would then quickly escalate. Then, the moment either Hezbollah or Hamas fire any rocket at Israel that was not previously in their arsenal, Israel and the US would have casus belli to attack Iran. 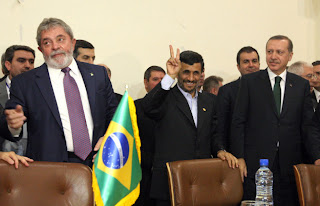 Lula, Ahmadinejad and Erdogan
source
You must click that pic to enlarge and see the look that Erdogan is giving Lula. Trust? I don't think so. And Erdogan would be exactly correct in my opinion.
Remember the Tri-Border Area, where Brazil, Paraguay and Argentina meet. Organized crime paradise. Keep in mind who runs organized crime.
See: the Bangkok of Latin America:

Back in 2002, CNN reported, from various unspecified "intelligence sources," that al Qaeda terrorists were meeting in this area and plotting to attack US and Israeli interests, in conjunction with Hezbollah.
...There's actually a very well-developed narrative about this area being connected to Hezbollah, Hamas, Lebanon, Iran and al Qaeda, among others. (Terrorist threat in the Tri-Border Area: myth or reality? 2004; Organized Crime: From Trafficking to Terrorism, Volume 2, pp. 159-161)

Lula has kissed the ring or whatever one has to do to be considered a rising star by the international cabal. The 2016 Olympics will be in Rio de Janeiro.

Meanwhile, we have Paraguay and Lugo over here on the left.


To refresh our memories on Paraguay: the Bangkok of Latin America, and not for nothing, in which we learn about the Tri-Border Area, the Jesuits, Chabad, organized crime, government corruption, and human trafficking, not necessarily in that order. The average American doesn't hear about Paraguay, though it's an organized crime paradise. Why is that? Paraguay not ready to come out of the crock pot yet? Maybe soon.

Lugo has ties to the CIA. Put those two clowns together.

Lula & Lugo
Brazil, Paraguay fight narcos with border security, AP, May 3, 2010
Here's a version of the reasons behind the Lugo / Lula summit:


The explosive cocktail of insecurity, drug traffickers and guerillas has kept Paraguay on edge as of 2008 ever since the high-profile kidnapping of cattlemen Luis Lindstrom first and Fidel Zavala afterwards. Both were released after paying a ransom (over US$1 million) to the Paraguay People’s Army (EPP), a leftwing guerilla organization. Although some link the EPP to Lugo himself (it reportedly has members that were seminarists when he was the Bishop in the San Pedro district), its real connection is to Colombia’s FARC from whom they may have acquired military training.

In order to counteract such FARC-EPP relationship, Lugo’s government has asked for the help of Colombia’s armed forces and police to train Paraguay’s security forces to fight both the narco-guerilla forces as well as to increase the participation of Paraguayan society.

...“The largest criminal factions in Sao Paulo have set up in Paraguay and have imported practices not carried out by Paraguayans such as the summary execution of enemies,” Folha de Sao Paulo reported over the weekend. According to Nelson López, the head of Paraguay’s SENAD narcotics bureau, “that Brazilian faction is acting to control all the drug trafficking activities along the border and if we allow it this could become a Mexico or new Colombia,” he warns.

Things must be ready to escalate.

So Lugo wants help from the Colombian military. Israel and Colombia? Very tight.


"Some of the weaponry that Colombia is using in battling terrorism originates from Israel. Over the years, Colombia has bought planes, drones, weapons and intelligence systems from Israel." (Colombia seeks to broaden Israel ties, JPost, 4/28/10)

What could possibly go wrong?

In recent years, U.S. concerns have increased over activities of Hezbollah and the Sunni Muslim Palestinian group Hamas (Islamic Resistance Movement) in the tri-border area (TBA) of Argentina, Brazil, and Paraguay, which has a large Muslim population.

The TBA has long been used for arms and drug trafficking, contraband smuggling, document and currency fraud, money laundering, and the manufacture and movement of pirated goods.

A 2009 RAND study examines how Hezbollah has benefitted from film piracy proceeds in the tri-border. The State Department terrorism report maintains that the United States remains concerned that Hezbollah and Hamas sympathizers are raising funds among the sizable Middle Eastern communities in the region, but stated that there was no corroborated information that these or other Islamic extremist groups had an operational presence in the area.

Allegations have linked Hezbollah to two bombings in Argentina: the 1992 bombing of the Israeli Embassy in Buenos Aires that killed 30 people and the 1994 bombing of the Argentine-Israeli Mutual Association (AMIA) in Buenos Aires that killed 85 people. In November 2006, an Argentine judge issued arrest warrants in the AMIA case for nine individuals: an internationally wanted Hezbollah militant from Lebanon, Imad Mughniyah, and eight Iranian government officials, including former Iranian President Hashemi Rafsanjani.

Interpol subsequently posted a Red Notice for Mughniyah, and in November 2007, its General Assembly voted to approve notices for five of the Iranians wanted by Argentina (not including Rafsanjani). The action had been held up since March 2007, when Iran appealed the decision by Interpol’s Executive Committee to issue the notices. In February 2008, Imad Mughniyah was killed by a car bomb in Damascus, Syria. In December 2008, an Argentine judge in a civil suit against the Iranian suspects ordered the attachment of six commercial properties in Argentina owned by a former Iranian cultural attaché who is one of the suspects in the AMIA bombing.

According to Argentina’s Special Prosecutor Alberto Nisman, appointed to lead the AMIA investigation in 2004, the AMIA case is still alive and progressing. To date, $1.5 million in Iranian assets have been seized and the seizure of more than $600 million in assets is pending; such funds would help cover restitution to the families of the victims and material damage from the bombing.

In October 2009, an Argentine judge charged former President Carlos Menem, his brother Munir Menem, former Judge Juan José Galeano, and several other high-ranking former police and intelligence officials with obstructing the AMIA investigation and protecting suspects. In December 2009, an Argentine judge ordered reopening the case of Carlos Telleldín, a mechanic alleged to have prepared the car bomb used in the AMIA attack.26

Over the years, the U.S. Congress has continued to express concern about progress in Argentina’s investigation of the 1994 AMIA bombing, with the House often passing resolutions on the issue around the time of the anniversary of the bombing on July 18.

Another resolution, H.Res. 435 (Klein), approved November 5, 2007, by voice vote, expressed concern over the emerging national security implications of Iran’s efforts to expand its influence in Latin America, and emphasized the importance of eliminating Hezbollah’s financial network in the triborder area of South America. In the 111th Congress, H.Con.Res. 156 (Ros-Lehtinen), approved July 17, 2009, again condemns the AMIA bombing and urges Western Hemisphere governments to take actions to curb the activities that support Hezbollah and other such extremist groups.

The usual suspects, and I'm not talking about Hezbollah and Iran.

But you know how you really know that the Tri-Border Area is ready to come out of the crock-pot? Because Hollywood discovered it, and they're going to THROW THE SPOTLIGHT ON IT NOW.

The Oscar-winning director Kathryn Bigelow has angered the Argentine and Paraguayan governments who claim her next film Triple Frontier could destroy their tourism industries.

Bigelow hopes to make her film in the border region between Argentina, Brazil and Paraguay - one of South America's most visited tourist destinations thanks to attractions such as the Iguacu Falls (above). However the area is also notorious for activities such as smuggling, arms dealing and drug trafficking and it is these aspects which Bigelow wants to throw a spotlight on.

you know it, aan.

Erdogan better double his security detail, since he's already pissed of that SLC several times in the past and that's one way to a shortened life span.

dubs, i hope he can get through the media gauntlet.

greg, no doubt. he's got to have nerves of steel. i like the guy.