a mockery of life

When you are the sole source of information, you tend to have a lot of influence. ~ Dave McGowan 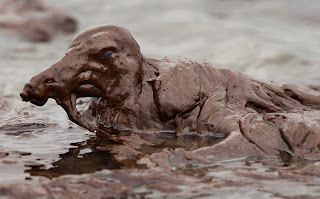 a living creature suffering and dying in misery, courtesy of BP and assorted "experts"
who are taking forever to fix the problem
In watching CNN this morning, I noticed CNN proudly pointing out that their reporter, Kyra Phillips, got to go out to the Deepwater Horizon scene with Thad Allen. Evidently she is the only reporter to have been granted access. How exclusive. No one finds this strange?
Tony Harris asked Kyra Phillips to explain why she, of all people, got to be the only reporter allowed out to the rig. She explained that she knows Thad Allen from way back. She explained what it was like to be embedded with him for two days, bumping into James Carville and Tony Hayward, and Spike Lee making a movie, etc. Just in the first half hour. So Kyra has great sympathy for Thad Allen, for his busy busy days being like Forrest Gump. As Tony helpfully explained in response to criticism from other news outlets that CNN got the scoop, the news business is all about access.


...HARRIS: Well, and let me say something on your behalf here. Look, a lot of this carping about the access, and why the access, and why Kyra, first of all, we know that a lot of that carping is coming from other media outlets who would love to have the access that you have been granted. And the other thing that we know in this business is that this is about personal relationships.


...HARRIS: You know what? And I want you to think about this, because, Kyra, as you're talking about Thad Allen's day -- and I will tell you, I had this thought listening to you last hour, as you previewed what you're going to be sharing with us this hour, you know, if you listen to the echo chamber of the world that we work and make our livings in, there is a lot of complaint that not enough is being done quickly enough. And when you listen to that day that you have just laid out, it is amazing how much work is going on, not just by Admiral Thad Allen, but also the other teams.

So no access, aside from Kyra 45 days in. And yet, a complaint about scrutiny.

CAPT. NICK SCHINDLER, TRANSOCEAN: .... Part of the problem is that there is a lot of outside scrutiny on what it is that we're doing out here. And I think the American population is wanting this well to be done. They want it now. We all want it done now. But we all have to understand that this is a well that's killed 11 people. We have to understand that we're sitting over top of one of the world's best drilling rigs. The well that we're drilling right now killed 11 people and sunk a rig. And so we're not going to speed up and we're going to do this as safe as possible and we're not going to hurt anybody. And that's our goal.

So I guess they don't like that people are making disparaging remarks about what they may or may not be doing out there, for 45 days, while all this destruction goes on and on and on, and  no one has access. But they don't want anyone hanging around either at the "killer well" to get a better look at how hard they're working the problem. I mean shit, someone could get hurt. So we just have to trust Kyra, and she and Thad Allen are likethis. 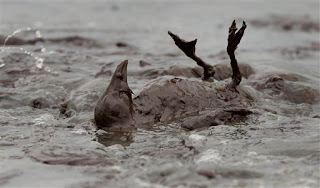 
Oh-so-helpful Josh Levs with his cute little graphics, always willing to talk to people like they're in fifth grade. Josh helpfully reminds us that:

Well, Josh, alternatively, BP could have done some of the things that have been tried before. Hmm?

Since 042610 Ruth DeLaMater Bundy and I have attempted to get information across to BP and others making the decisions that the SECRET TO STOPPING THE LEAK AND RECOVERING OF ALL OIL AND GAS WAS KNOWN. Sadly no one reviewed material with the TRUE EXPERTS who work in similar leak problems ALL OVER THE WORLD! (page 5)

Is he correct? Well why don't they find out? How many days did they do absolutely nothing but watch, while they thought up methods that NO ONE HAS USED BEFORE, presumably because they DON'T or WON'T WORK.

For instance, even I, a lowly right-brained woman, know that a saw blade gets pinched cutting a piece of wood or a broken pipe if you don't keep the pressure off the blade. And that there's a safe way to cut a tree limb or broken pipe.

How exactly does being underwater change that? Well, it doesn't.

We also warned Rear Admiral Landry about the cut saws with teeth being used to cut from the bottom or stressed sides and had no idea someone would attempt a cut below the bent section of the riser FIRST before freeing the top with a V cut then positioning the diamond bit wheel on the flange to cut first half way around then re-position and cut the last half with crane supporting pipe...(page 2)

Therefore, so sorry, but in my opinion there's no excuse for fucking that cut up. It's just another stupid mistake, a mockery of our intelligence, and a mockery of God's creation, by the experts and their obnoxious paid flunkies in the media. Throw it on top of the pile of death. 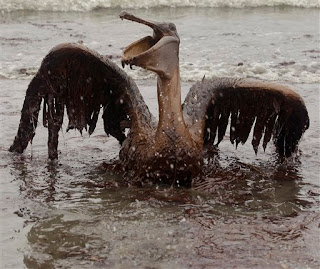 These people just make me want to puke

Is that ditz saying Thadpole helped the people or the disaster?

Here's an intelligent solution left at my blog by an obviously educated and experienced person from the oil business:

walter washco said...
I believe you may be right. The thing I noticed looking at the live feed videos of the oil gushing out, is it could have been stopped easily from day one. (I have long experience in the oil field.) The pipe from which the oil was flowing could have easily and quickly been crimped using a blunted hydraulic shears to staunch the flow. Two days after I sent an email to BP in Texas asking why they don't crimp the pipe they sheared the riser off at the base of the blowout prevent er thus making impossible now to crimp the riser pipe. However I wish to make it clear to the public that even after this obvious act of sabotage the flow can easily be stopped by forcing a pencil shaped pine log with a slight cork like taper into the mouth of the blowout prevent er. I do believe they want to leave this thing hemorrhage for as long as possible, what their motive is I do not know.

Good point. At the Fire Department, we had a mechanical device that was basically a large clamp that was used to shut off the flow of water rushing from a hoseline if the hose broke and for some reason, the pressure couldn't be turned off.
It would work on any size line, even the 'Big Line' which could gush out over 1,500 gallons per minute.

It was a situation that never happened in my 20 years there, but one we trained for and the clamp, about 3' long, worked well.

And most people think that Gaza is only in Palestine.

greg, no she was answering the question how the meeting was arranged.

but having said that, in light of everything we've seen, he must be in the bag because he's been entrusted to lead the show.

the media are subservient just like it's a military operation. i mean they even used the term 'embedded.' but they're subservient to BP as though it's a branch of the military, complete with fawning.

dubs, i actually have read about the magnetic pole shifts also. yes i'd expect something like that coming. as i understand it's happened many times, but never when our whole society operated on an electronic mind-control system with rogue component (internet). so when it does happen they will lose their control system for a time. that would justify massive killing and weakening us in advance.

"The corporate cousins have raised the stakes of the game. It’s either them or Earth itself. When history passes its verdict on the current era, she will not assign much import to the advent of the First Black President of the United States. Rather, history will mark 2010 as the year a servile political operative in the White House exposed the seabed to deep defilement by the oil colossus, from which the world never fully recovered."
- Glen Ford, BlackAgenda

he has totally been set up to take the fall for this. i was just reading at VOA, total psyops, that he cannot deal with foreign policy now because of this. HINT HINT.

and look at this:

Conservative commentator Bill Kristol spoke on Fox News Sunday. "Who is in charge? Here is an easy way to think of it," he said. "And who is running this crisis from the White House?"

good question Bill. so WHO DOES run the white house anyway?????? rahm and friends? i guess that's where we should look for answers huh?

"You Will Have No Protection", by Alice Walker
http://electronicintifada.net/v2/article11319.shtml

So glad she found her voice again. Said she was partnered with a jew for years, wasn't 'allowed' to question.

obama does what he's told by the people who run him. they givith and they taketh away.

this is the mistake for all those people in power who believe it when people blow smoke up their asses, like obama, thad allen, etc. they are being used, and when they're used up they will be discarded like a piece of toilet paper.

Austria refused to go to the Bilderberg meeting in Spain. They are going to be the first to opt out of the EU.

In Spain protestors days before the meeting on the hill at Dolce painted a pyramid on a big rock under the hotel with an eye on it. There was an arrow pointing towards the bottom that said police you are here!

They used chalk to put messages all over the streets so nobody could miss what is going on. Pretty clever.

The bog boys did not show for the meeting either.

bho, i just looked that whole thing over and checked all the links.