the people on the inside

So come to find out that Bill Ayers and Bernardine Dohrn, formerly of the Weather Underground, a communist terrorist gang, were part of the flotilla. (http://www.wnd.com/index.php?fa=PAGE.view&pageId=160661)

This bolsters the case of course, the Israeli argument, that the flotilla organizers are terrorists. See? Look! Ayers and Dohrn, a couple of evil communists from a (shhh Jewish-led) terrorist gang from the sixties. Oh....wait...


The most radical group was the Weathermen, so named for Bob Dylan’s line “You don’t have to be a weatherman to know which way the wind is blowing.” The name was later changed to Weather Underground. In today’s terms the Weather Underground would be classed as “terrorist.” Frustrated by the Viet Nam War, disaffected by failures in the civil rights movement, and opposed to capitalism, the group intended to take over the government. They freed Timothy Leary from jail, bombed two dozen public buildings, including the Capital Building and Pentagon, and lost three of their members to a premature bomb explosion in Greenwich Village. One member was also later implicated in the death of two police officers as the result of a Brinks truck robbery. Among its leaders were, Mark Rudd, Bernadine Dohrn, Bill Ayers, Naomi Jaffe, David Gilbert, Laura Whitehorn and Brian Flanagan. Of the seven, only Ayers and Flanagan are not Jewish.

And those names mentioned by Jewish Achievement don’t include a number of other important Jewish leaders in that terrorist organization including, Kathy Boudin, Susan Stern, Sam Karp, Russell Neufeld, Ted Gold (one of Weathermen who blew himself up making bombs), Susan Rosenberg  and Bob Tomashevsky.

According to the Jewish Daily Forward, the Weather Underground was 40-50% Jewish. Others have claimed the figure closer to 90%. Dohrn has one Jewish parent, her father. (http://www.forward.com/articles/14437/)

Points made at this link:

We have here, along with other bloggers, been covering for days on end the tremendous evidence that Israel planned this raid in advance, that Rahm Emanuel visited with Netanyahu and Peres in the week before the raid, that the violence was intentional, that people were targeted for assassination and were, in fact, assassinated, etc.

So all that remains is to get away with it, which has been a little problematic actually.


If only it could be shown that the flotilla organizers really are terrorists, that would probably take a lot of pressure off of Israel.... 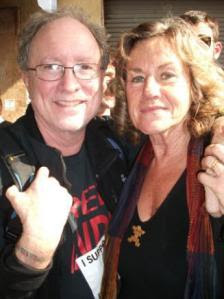 Michel Chossudovsky: Was the Obama Administration involved in the planning of the Israeli attack on the Gaza Freedom Flotilla?: The Broader Military Agenda

will israel get the casus belli that it works so hard for?
mental cases yadda yadda yadda
bullying, threats and lies continue apace
dedicated to making other people miserable
i joined NATO and all i got was this lousy t-shirt
fork, israel, done
Posted by A. Peasant at 10:00 AM

This pair being amongst the passengers, might go along way to explaining how the israelis had a passenger and cabin list.

Interesting connection with Obama, too.

I find it interesting how the mass media suddenly changed the story from 19 dead to 9! Is there any explanation to this? Or are they trying to hide this connection with the countries (other than Turkey) that recalled their diplomats? Is it possible Iran is taking advantage of this situation by sending aid to Ghaza on airplanes and ships? It is amazing how all the big media outlets have shifted attention to Iran sanctions and a North Korea guard who killed 3 Chinese.

Looks like there were spooks on board the flotilla.

aan, yes that's what i see too.

alhamask, i never saw any explanation why the death count went from 19 to 9.

i don't know. i'm working on a totally unrelated post for later, because there's always the possibility that while we are all focused over here, they are up to something over there.