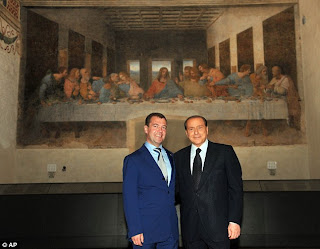 Berlusconi and Medvedev in Milan

Prime Minister Silvio Berlusconi has been criticised after he broke a strict 'no photographs' rule as he posed with Russian President Dimitri Medvedev in front of The Last Supper.

Art experts the world over agree that flash photography can have serious effects on centuries old paintings and galleries and museums forbid their use to protect the works.

However the rules appeared to have been broken for Berlusconi as he and Medvedev posed for several minutes in front of Leonardo Da Vinci's 15th Century mural.

President Medvedev is in Italy for a holiday and visited the Last Supper at the Santa Maria della Grazie museum while on a tour of Milan with Berlusconi.

Tourists who had booked a slot to view the work - which has a waiting list of three months - were held back to allow the party through to view the work which recreates Christ's Last Supper with his disciples.

Museum officials allowed three photographers in to take pictures of the two leaders using flash - despite clear signs banning the taking of photographs - but insisted that it was from a distance and not close-up.

A sign in various languages at the entrance clearly states that photography is not allowed - while wet umbrellas, mobile telephones, food, drink and smoking are also forbidden.

Today Professor Ulberico Santa Maria, who works at the scientific department of the Vatican Museums, and said: 'There is no way I would have allowed flash photography in front of the Last Supper.

'Flash photography is not recommended at all for works of art because of the intense damage that can be caused - certainly photography is allowed but the conditions have to be strict controlled using filters.

'We do not allow any sort of flash photography in the Vatican museums - we have four million visitors a year here and if everyone took just one flash photograph the damage would be immense.

'The fact that the Last Supper is a mural painting and not a fresco makes it all the more fragile to something like flash photography because of the organic material in the paint.

'This pigment is sensitive to flash photography and that's why we do not allow it - as I always say prevention is better than cure, so I am surprised that photographs were taken in front of the Last Supper.'

Alberto Artioli, superintendent of Works in Milan, said: 'The Russian president expressed a desire to have a picture as a reminder of his visit to the Last Supper and I was present at the time.

'I gave permission for three photographers to enter and take pictures. It was my responsibility, my decision and I authorised them because I did not see a problem.

'Flash photography can cause damage and ruin works of art but in this case it was just for a few moments.

'The photographers were quite far back and I really don't see the problem.'

Local councillor Davide Corritore, of the opposition Democratic Left, said: 'This is a very regrettable incident and gives the idea that leaders can do whatever they want.

'Granted a few photographs may not have damaged the Last Supper but it is the principle of that fact that it is forbidden for other people to take photographs but it was allowed for them.

'It does no favours for art and no favours for the city of Milan - any other authority would have not granted permission for photographs to be taken.'

Hypocritical, no surprise there. But also kind of creepy. 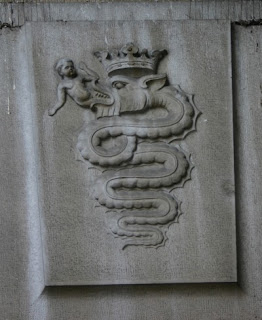 source
Visconti family’s coat of arms in Milan
"Berlusconi is the son of Luigi, a Milan banker, and Rosa Bossi." (source)
Posted by A. Peasant at 8:17 AM

pride goeth before a fall said...

Typical ruling class hypocrisy. They don't live by the rules, those are only for the little people, the useless eaters. The arrogance and hubris is reaching astronomical levels with these trough feeding maggots.