where is Hollywood's latest philanthropic gesture?

I got an email yesterday asking where are the aid concerts for the people of the Gulf? Such a great question.

A benefit concert or charity concert is a concert, show or gala featuring musicians, comedians, or other performers that is held for a charitable purpose, often directed at a specific and immediate humanitarian crisis. Such events raise both funds and public awareness to address the cause at issue. (wikipedia)

That's so nice. Such a great tradition.

Live Aid was a multi-venue concert that was held on 13 July 1985. The event was organized by Bob Geldof and Midge Ure to raise funds for famine relief in Ethiopia. Billed as the "global jukebox", the event was held simultaneously in Wembley Stadium in London, England, United Kingdom (attended by 72,000 people) and John F. Kennedy Stadium in Philadelphia, Pennsylvania, United States (attended by about 99,000 people). On the same day, concerts inspired by the initiative happened in other countries, such as Australia and Germany. It was one of the largest-scale satellite link-ups and television broadcasts of all time: an estimated 2 billion viewers, across 60 countries, watched the live broadcast. 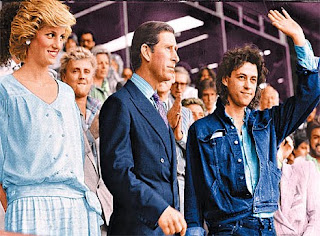 Diana and Charles and Bob Geldorf at Wembley, 1985 (Daily Mail)

Farm Aid started as a benefit concert on September 22, 1985, in Champaign, Illinois, held to raise money for family farmers in the United States. The concert was organized by Willie Nelson, John Mellencamp and Neil Young, spurred on by Bob Dylan's comments at Live Aid earlier in that year. (Dylan said, "I hope that some of the money...maybe they can just take a little bit of it, maybe...one or two million, maybe...and use it, say, to pay the mortgages on some of the farms and, the farmers here, owe to the banks....") Nelson and Mellencamp then brought family farmers before Congress to testify about the state of family farming in America. Congress subsequently passed the Agricultural Credit Act of 1987 to help save family farms from foreclosure.

That's right. Let's raise money to PAY OFF THE BANKS. Send your money in people it's for a good cause. This one's been a real keeper.

The 2005 concert, marked the 20th anniversary of Farm Aid, took place at the Tweeter Center in Tinley Park, Illinois, with events in downtown Chicago as well. The 2007 Concert took place at Randalls Island in New York City (1st Farm Aid in New York) and was recorded in High Definition to be broadcast on HDNet as a 2 Hour Special highlighting many of the performances from the Allman Brothers and Counting Crows to John Mellencamp and Willie Nelson. 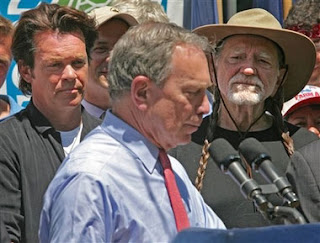 John Mellencamp, Willie Nelson and NY Mayor Michael Bloomberg announcing 2007 concert (source)
And "we are the world" lalalalala.... remember that song? They made a lot of money off that one. That worked so well they did it again for Haiti. 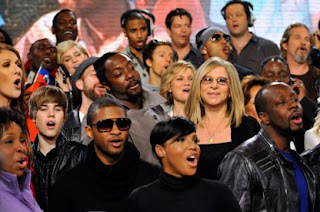 "Why isn't Barbra singing?"
And speaking of raising money for Haiti? They really shook the trees didn't they?


(CNN) -- In the wake of the earthquake in Haiti, George Clooney and other celebrities have signed on for a telethon to aid the devastated island nation. The Oscar-winning actor will take part in a fundraising program to air commercial-free across several networks, MTV announced.

"Hope for Haiti Now" will air on ABC, CBS, NBC, FOX, CNN, BET, The CW, HBO, MTV, VH1 and CMT starting at 8 p.m. ET/PT and 7 p.m. CT on Friday, January 22.
MTV said Clooney will serve as a host in Los Angeles, while musician Wyclef Jean will be in New York, and CNN's Anderson Cooper will appear from Haiti. The two-hour event will feature as-yet-unnamed musical performances and celebrity appearances, as well as live news reports from CNN.

It's Hollywood's latest philanthropic gesture in reaction to the catastrophic situation in Haiti. A celebrity lounge at this weekend's Golden Globe Awards in Beverly Hills has been turned into a Haitian aid fundraiser. Medecins sans Frontieres says actors Angelina Jolie and Brad Pitt have donated $1 million to the group's emergency medical operation as it responds to the disaster.

There have been benefits for 911, the tsunami, Katrina...

But not for the Gulf of Mexico.

"Jennifer Aniston dined out with her publicist at Cipriani in Mayfair last night."
Mail on Sunday
Posted by A. Peasant at 9:49 AM

live from the mancave said...

Relief concerts for Americans? What an idea! Farm aid is probably the only one. Good old Willie Nelson God bless em.

hey how goes it in the man cave?

I don't know but maybe it's perceived to be harder to steal the charity money, funnel it into a black hole here in the states than if it's moved offshore. Even the MSM has mentioned that little of the money given to Haiti has been used for the people there.

i'm sure that's part of it. but also, i don't think they want to raise public awareness and bring attention to what's going on.

No this is quiet killing here. They want as many dead as possible before someone starts a fuss. Every day you keep a lid on it the less social security checks go out.

loungin' at the mancave said...

The mancave is supergroovycool! Lots of 'puters a loud hi-watt stereo, no teevees or bird cage lining presstitute newspapers none of that. Some irrereverent, snarky books and magazines. Reading Thoreau On Walden Pond right now. The ladies should make a girlcave! It all goes back to childhood when you would make a treehouse or fort. Sorry took so long to reply I was away from the mancave.

i think we ladies have one somewhere...

haha, no, the strip club is not the same as the girl cave. solly!

A.P. I guess Jay Leno is going to put on a benefit concert in Biloxi, Mississipp towards the end of August. It is to benefit the people of the gulf region. o[+_+]o

Ahh I love cynicism and the questioning of everything. It has never failed me yet. I keep my finely tuned bravo sierra detector in top shape.

well then you have come to the right place, o mysterious one... ; D

BILOXI, Miss. — Jay Leno, host of "The Tonight Show," will perform Aug. 21 in Biloxi to raise money for Mississippians affected by the Gulf oil spill.

foundations. gotta watch out for those.

change we can believe in?

definitely not a rinky-dink foundation, but Florida's "largest community foundation."

I hope to have some pocketchange left after Barry the Messiah© is done.

Whisper words of Wimpy, let it beef. (As sung to let it be)

A.P. I went to Guitarzan's mancave on Sunday! It was a blast. It is a garagemahal at Guitarzans. He has been playing as long as I have been alive and can really tear off some licks. Make the ol' six string sit up and beg. Hope your Sunday was relaxing and fun as well. :-)

The Jew Bloomberg and the Jewess Streisand could use a good scourging.

Every Jewish man wants to kill his father and bugger his mother."

oh ha, here it is monday. yes sunday was a good day thank you.

and i never could stand streisand even long before i knew what i know now. she always looked like a haughty bitch to me.