distracted by any chance?

Brilliantly written. Really shows up the crappy mediocrity that passes for news and analysis by all those smug, well-paid shills on teevee and in the papers.

Is an economic collapse near at hand? Or a war? Or both? Read the answers to the following arguments.

1. The economy is too complex to be controlled by just a handful of people…
2. Yes, international banks triggered the meltdown, but the “greed of Capitalism” is truly to blame (i.e. Its all the Republican Party’s fault)…
3. Global banks would never engineer the collapse of the U.S. economy or the Dollar. It makes them too much money…
4. China would never dump U.S. Treasuries because it would hurt them as much as it hurts us…
5. Sure, bankers took advantage, but it’s really the American people’s fault for getting suckered…
6. Ok, maybe the banks are causing a collapse, but to say the government is helping them is just crazy conspiracy theory… 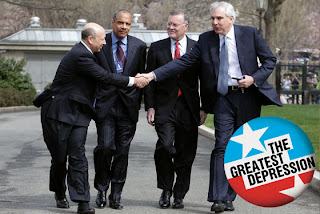 Bankers had a beautiful experience at the White House
March 27, 2009
Getty Image courtesy of The New Yorker
http://nymag.com/daily/intel/2009/03/todays_bank_bro-down_at_the_wh.html

A little feedback from the boys on today's klatsch:
Vikram “Zen Garden” Pandit: “It was a good constructive meeting with a lot of open dialogue.”
John Mack: “It was all about working together. It was very encouraging.”
John Stumpf: “The basic message is we’re all in this together. We’re trying to do the right thing for America.”
Jamie Dimon: “Fabulous.”
Lloyd Blankfein: “I jizzed in my pants.” 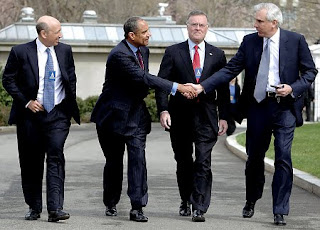 Fast forward a year and a half or so.

Everything All Better Now? Do you think we're still All In This Together? One Big Happy Family? Oh sorry were you DISTRACTED by any chance?

...Will their plan work? I think not, but I’m an optimist (no, really). The pursuit of total control and total power seems rather infantile to me, be it on an impressively psychotic level. Although, if we are made to forget who the real enemy is, then I think they do have a chance at success. That is how they have remained successful to this point. Only now does the average man have such immense knowledge at his fingertips, the knowledge to bring down a line despots and tyrants that have reigned for centuries. If only the average man was not so easily deterred by WMD’s (Weapons of Mass Distraction). The Elites will likely ignite some wars, tempt us into in-fighting, and fabricate enemies like Al Qaeda out of the ether. As the slogan goes, “Order Out Of Chaos”. Whatever happens, our eyes must remain fixed on the root of the problem; the bankers, and nothing else.

ha thanks. that piece i linked to is really good, i hope people read it.

Hullo AP, Sorry I haven't read anything. I just wanted to say Hi and gee whiz, doesn't the blog look good? I really like how the pages sit on the background. Very good.

Anyway, I'll have a big read tonight, you and Aangirfan, yeeha.

well thank you nobs. i think it is an improvement and i'm glad you approve since you know these things better than i do.

“Elites destroy cultures to make way for new philosophies; their philosophies. It’s not so much “conspiracy theory” as it is a widely admitted methodology”.

I liked that line A.P. If most people were educated in the reality of the central bank monetary system Wall St and Threadneedle St would be draped with the corpses of bankers like the Appian Way in the time of the Romans.

Money=debt. Bankers make it up out of thin air and expect us to pay back with earned cash + compound interest. Depressions, recessions and bankruptcies are not unfortunate occurrences – they are built into the fabric of the system from its inception. Here endeth my rant

I had a chuckle at that one earlier DM