he is supplying plausible deniability

Who wants the Merchant of Death? Well the United States of America does. I suppose they want to hold him responsible for some things.

Victor Bout studied at the Soviet Military Institute for Foreign Languages and speaks six languages.  He allegedly worked as a military translator and got involved in arms dealing in the 1990s. 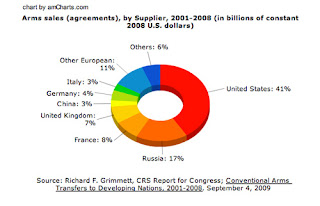 Caption reads:
"Russian arms sales and those of every other nation are dwarfed by those by the United States, for those who are looking for other Merchants of Death. From 2001 to 2008, according to a report to the US Congress, American companies supplied US$151 billion in arms – 41 percent of the world’s guns. Russia followed, with US$63.82 billion, or only 17 percent of the total. BAE systems, the British arms manufacturer, emerged as the world’s biggest single supplier, dwarfing even all American companies, with £21 billion (US$31.7 billion) in sales.)" Source: Asia Sentinel: Who wants the Merchant of Death?
So Bout may have been supplying plausible deniability to nations selling weapons to terrorist types, and who has been selling the most weapons? The US and BAE Systems. So who would be needing some plausible deniability? Theoretically? Perhaps the US and BAE Systems....?
^^^^^^^

A short detour here to see if we have come across BAE Systems before. Why yes, yes we have.
See: narcissistic injury and rage - writ large, quoting Ewa Jasiewicz writing from Gaza, 1/8/09:

The arms companies making the weapons that are targeting people here, the companies that are selling stolen goods from occupied land pillaging settlements, the companies building the apartheid wall, the prisons, the East Jerusalem Light Railway system. These companies, Carmel Agrexco, Caterpillar, Veolia, Raytheon, EDO, BAE Systems, they are complicit in the crimes against humanity being committed here.

See: back rooms of the NWO, about Kazakhstan, quoting Peter Colville in The Princes and the Caspian:

Britain is the third largest foreign investor nation in Kazakhstan. More than 100 UK-based companies are operating there, primarily in the field of energy, although the St Helens-based Pilkington glass company is currently developing a plant near Kyzylorda, which was said at its inception in 2007 to be the largest industrial project in the country.

Undoubtedly the British kingpin in this economic love-in is Sir Richard Evans, the former chairman of BAE Systems and the man who brokered the largest arms deal in British history during the 1980s in Saudi Arabia. Sir Dick is a world-renowned tough cookie. Since 2006 he has been in charge of Samruk, the Kazakh oil-to-railwaysto-airline state holding company, now Samruk-Kazyna, which controls one third of the nation's developing economy and in effect employs some 250,000 of the 16 million population. Not bad for a lad from Lancashire.

See: this disaster was brought to you by, about the army's Human Terrain System:

BAE Systems is a huge defense contracting company registered in the UK and serving seven home markets: Australia, India, Saudi Arabia, South Africa, Sweden, UK and the US. BAE Systems, Inc. is headquartered in Rockville, Maryland and handles relationships with the DoD. BAE Systems trains and employs people for the US Army's Human Terrain System (HTS) out of Leavenworth, Kansas.

HTS provides Human Terrain Teams (HTT) and Human Terrain Analysis Teams (HTAT) to augment deployed combat troops in Iraq and Afghanistan. The idea is to embed social scientists into combat brigades, and these anthropologists will help the military get on better with the local populations. Theoretically a good idea if, say, we really were in Iraq and Afghanistan to help the local populations. Otherwise, total mind-fucking and completely unethical. So much so that actual anthropologists want nothing to do with HTT.

...You may or may not be surprised to find links between BAE Systems and BP. A July 2007 piece in Executive Intelligence Review gives a rundown of several key BAE executives.


Well, so not such a short detour after all. Anyway, I think we can see that there is a small possibility that a company like BAE might need some plausible deniability from time to time. THEORETICALLY of course.

Let's go back to the Asia Sentinel story:

"One thing is for sure, the last thing Russia wants is Bout on American soil, spilling his guts after getting a taste of American justice meted out in a federal courthouse," said Michael A. Braun who, as chief of operations in 2007 for the U.S. Drug Enforcement Administration (DEA), was asked by the U.S. National Security Council to finally bring Bout to trial after chasing him since President Clinton's administration.

It may well be the last thing other countries want as well. He has been implicated in trafficking former Eastern bloc weaponry, particularly from Bulgaria and Romania, to 17 African countries, according to a report by Amnesty International, as well as to the Taliban in Afghanistan and Abu Sayyaf in the Philippines. And, according to the report, while many gun runners could deliver small arms, Bout allegedly was able to deliver major weapons systems, an indication that he was probably working with governments.

"There are countless private arms dealers around the world, often operating at 'deniable' arms length from states happy to see their wares introduced to conflicts and to support often unsavoury allies few western politicians would wish to have their names linked to but whose actions are deemed as vital for anything between strategic national interest to short term expediency," the independent security consultant said.

As an example, Bout was arrested in a Bangkok luxury hotel during the DEA sting for allegedly planning to sell weapons to Revolutionary Armed Forces of Colombia (FARC) guerrillas. He was allegedly offering the AT-4 Spigot, a wire-guided Russian missile system that has a maximum range of 2,000-2,500 meters and can penetrate up to 400-460mm of armor, depending on the type of missile used, an indication of the sophistication of weapons that Bout was able to offer, as well as 100 shoulder-fired, surface-to-air missiles, which could shoot down military and commercial planes.

The newer indictment alleges that Bout and his Syrian-American partner Richard Ammar Chichakli wired about $1.7 million through banks in the U.S. to buy two Boeing airplanes in America. Chichakli, who served in the US Army, is a Syrian-born US citizen, also known as Robert Cunning and Raman Cedorov.

Chichakli escaped arrest and may be in Russia after the US Treasury Department seized his assets.

The newest indictment said prosecutors would seek to seize Bout's alleged accounts at Wachovia, the International Bank of Commerce, Deutsche Bank, and the Israel Discount Bank of New York, according to the New York Daily News.

As you probably know, the "Russian Mafia" has a very strong presence in countries like Bulgaria and Romania, the source countries for at least some of Bout's alleged weapons. 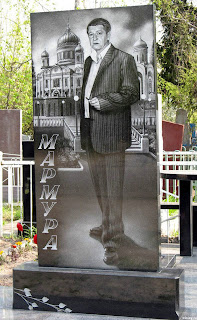 In the 1990's this creep was living in a Hungarian castle, in luxury. He was guarded by women trained in marshall arts, dressed in gold colored uniforms, until one day Hungarian border guards discovered two suitcase nukes, in a car belonging to Mogilevich's associates. Needless to say Semyon did not even pack his bags, he just disappeared together with his women guards. He turned up in Israel, where he built a huge mansion in Netanyah, where majority of residents are ex Russian KGB agents, and Russian is spoken everywhere. This is also the place where other gangsters abide, such as Nevzlin brothers, who are frequently visited by the big shots of Jewish Mafia such as Victor Bout, Boris Berezovsky, Mark Rich and Gusinski.

Today this Mafia is engaged in the largest arms and dope dealing system known to man. Victor Bout operates dozens of cargo airplanes from Sharjah, They deliver the arms to both sides in the Sudanese conflict as well as Somalia and the Horn of Africa. If it was not for their greed for money the wars in Africa would have petered out long ago. 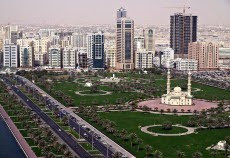 Sharjah, UAE, next door to Dubai
source
Posted by A. Peasant at 2:07 PM

Surprise, surprise – there’s an Israhelli angle. Did he go off reservation or cross the wrong pin-stripe bankster? I wonder which jurisdiction would he sing the most to?

it could be a way to make russia look bad. i doubt these connections will be discussed much if at all.

Anyone running a sweepstake on this guy’s life expectancy?

if he doesn't make it through this next stage in his career, i'm sure he'll get one of those slick life-size headstones in the mob cemetery.

I have an idea, cut him in half and give half to Russia and half to the U.S.