A Hindu mob destroyed the Babri Mosque on December 6, 1992.

Ten years later came the riots in Gujarat. The man in charge in Gujarat is Narendra Modi, Chief Minister. He assumed office on October 7, 2001. 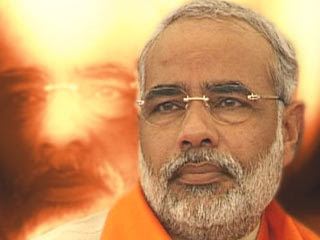 Narendra Modi
"Gujarat Chief Minister Narendra Modi has taken over as
the president of the Gujarat Cricket Association (GCA)."
Isn't that lucky? He has not one but two important jobs. However, there are some corruption issues with cricket in India, Such as "allegations of match fixing, illegal betting, money laundering and multimillion-dollar kickbacks." 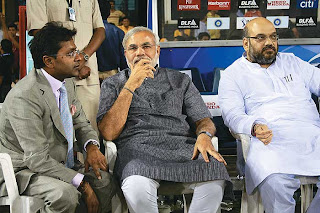 Lalit Modi and Narendra Modi at an IPL match in Ahmedabad
We looked into a cricket scandal at the time, April 2010, because the scandal forced Sashi Tharoor, a junior minister, to resign. See: sunny with a chance of terrorism.

We have also written about terrorism and sports in regards to the capture of Mohammed Abdul Khwaja in India.

Attacks against India conflate with attacks against the UK. According to a report in the Sri Lanka Guardian, it was Khwaja who provided the intelligence that led to the UK terrorism alert last weekend [January 2010 - ed.].

According to Indian police, Khwaja  "is one among the many youth who took to jihad following the Gujarat riots."

Also note that Shahid Azmi, a lawyer for one of the accused Mumbai suspects, was assassinated in February 2010, just days before appearing in court. Azmi represented one of the three accused Mumbai terrorists, along with "more than 50 Muslim terror suspects languishing in jails in connection with Malegaon blasts and train bombings."


And were these various developments helpful to Narendra Modi, among others?

Investigative weekly Tehelka on Thursday claimed to have unravelled the truth behind the 2002 Gujarat riots. Tehelka claimed it had 'irrefutable' evidence that the killings of Muslims post-Godhra train carnage in Gujarat was 'not a spontaneous swell of anger but a genocide' planned and executed by top functionaries of the Sangh Parivar and state authorities 'with the sanction' of Chief Minister Narendra Modi.

Addressing a press conference in New Delhi, Tehelka Editor-in-Chief Tarun Tejpal claimed that the magazine had carried out a sting operation over the last six months by talking to a number of Sangh Parivar leaders, including Godhra BJP MLA Haresh Bhatt, Shiv Sena leader Babu Bajrangi, who was earlier in the Vishwa Hindu Parishad, and VHP leaders Anil Patel and Dhawal Jayanti Patel, to bring out the truth.

"We have evidence that bombs were being made in the VHP office premises," Harinder Baweja, Editor (Investigations), told rediff.com.

"In Tehelka's ground breaking investigations, for the first time, hear the truth of the genocidal killings from the men who actually did it. In shocking disclosures, Chief Minister Narendra Modi came and patted the back of criminals, and told them that they had done a good job," Baweja said.

Here are some disturbing pictures of some of the Muslim victims of the Gujarat riots. 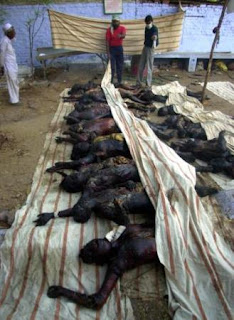 "The bodies of dozens of burned Muslims
waiting for a mass burial lay in a Muslim graveyard in Ahmadabad India." 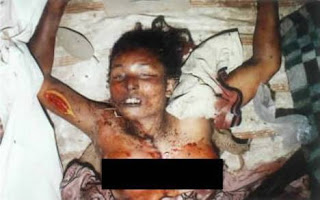 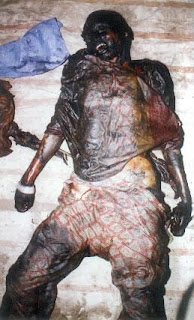 "The result of the deplorable, vicious racism of Hindus in Gujarat, India."
"...under Modi's regime Hindus 'taught a lesson to Muslims'."
source
Here is an extensive report of the Genocide in Gujarat: The Sangh Parivar, Narendra Modi, and the Government of Gujarat.
Page 2 gives a concise summary. Narendra Modi had complete command over the police and law enforcement in Gujarat.
^^^^^^^
In Part 1 we read that "Sangh Parivar is all set to turn on the heat over the Ayodhya issue once again, with a fresh campaign to “awaken” Hindus starting Monday. Rashtriya Swayamsewak Sangh and Vishwa Hindu Parishad (VHP) have drawn up a four-month plan which would climax in a “grand celebration” on the occasion of Shaurya Diwas (December 6), to mark the anniversary of the 1992 Ayodhya demolition."
Seems a little more ominous the second time around, no? A fresh campaign to awaken Hindus, with a four-month plan to "climax in a 'grand celebration'" of the day they destroyed the Babri Mosque, December 6th?
People making elaborate plans to celebrate destruction -- always a red flag in my book.
Is there a plan to maintain plausible deniability?

Experts are of the opinion that many extremist elements earlier associated with Sangh Parivar became separate from the Parivar and then founded terror network. The prominent among them are Sadhvi Pragya Singh Thakur, Sunil Joshi, Pramod Mutalik. Was it done under a well-thought plan to save the funds, bank accounts and properties of Sangh Parivar if Hindutva terror network is unveiled?

The operational method of MOSSAD and Israeli terrorist organizations is deceiving. They have made ‘deception’ their agenda. As a strong tactics of theirs they carry out such deceptive activities. In the same way, the Sangh Parivar, RSS and those related to Bajrang Dal, with Pramod Mutalik, Sunil Joshi and Sadhvi Pragya Singh Thakur taking the lead, are doing their work. Their separation from Sangh Parivar is nothing but a staged drama to deceive people. It is meant only for protecting Sangh Parivar from the consequences their activities may lead to. So that the accounts, properties and all funds of the Parivar are safe.

Is Modi Mossad's "number one man" in India?


Communal forces backed by foreign agencies are hell bent on destroying India--America wants to dismember Pakistan, gherao China etc. and for that it needs India firmly in the US-Israel orbit. That is why Americans, British and Israelis were targeted. Nariman House was a hub where according to eyewitness reports, several suspicious Israelis were seen coming and out; it is possible that these people were involved in the terror attacks and that they killed their own people.

The Mumbai terror attacks were a gigantic exercise, a fight between those forces within the Indian  establishment who want to take India towards the dangerous and suicidal US-Israel nexus and those who want India to stay Independent and have good relations with Pakistan, China and Iran.


“Whereas the inhabitants of the Indian peninsula are Hindus whose hearts have been full of hatred towards Muslims, therefore, India is the most important base for us to work there from against Pakistan,” David Ben Gurion, quoted in the Jewish Chronicle, August 9, 1967.
see: some people just want to rip apart Pakistan 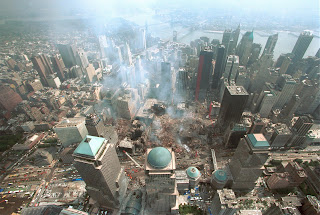 wide angle photo of Ground Zero
courtesy of:
http://www.israelnewsagency.com/groundzerophoto.html
Sacred ground.
Did you hear that Muslims want to build a mosque there?

"One would think that in this–the post 9/11 age–that a direct, face-to-face threat against the life of a decorated American war hero by someone claiming to be an agent working for a Middle Eastern country tied to previous acts of terrorism against the US would rouse some concern."

No. Not so much if the Middle Eastern country is Israel.
Posted by A. Peasant at 9:30 PM

Aside from the reptilian look of the Modi boys, having that beady eyed reptilian look, and one of them looks like he stuck his hand in a light socket, the names give them away, Sunny, Ibrahim, Sunil and Joshi. Thakur also stands out, sounds like Thacker. Remember they always want to be German. Sashi is a dead giveaway also as it relates back to Edomites fleeing into Russia and Japan.

Dates of April and December are also noteworthy. Satanic Holidays. Jesus had birthday switched to December by Constantine council.

See Sunny/sun God rings a bell, Joshi/Joseph, Ibrahim/Abraham.They always want to buy and be around sports teams, think NFL. Sometimes with very few clues you have to know how to read this thing.

Sometimes there are so few clues. In order to head off the wars by way of deception, you have to be able to read what is available and head them off at the pass.

I have had quite a few serious run-ins with the BJP, RSS, ShivSena crowd, even got into the Uttarakhand headquarters of RSS, drank tea with the head dude. Reminded me of Strom Thurmond, George Wallace. These people are about as 'religious' as our big-hair pedophilic pervert preachers in the West, quoting scriptures, mantras, blah blah with no spiritual understanding nor seriousness. It's all a fucking game/scam to them to allow them to play the 'powerful holy man' games, whip up their terminally ignorant masses to hate and murder of all who challenge their brahminical (brahminazi) imagined birthrights.
Thanks for the post, AP.
respects

thanks for witnessing bho. sometimes, maybe usually, that's all we can do.

indeed. this is a good site you may have seen already:

i saw that you wrote about mogilevich, brave aan.