up to the Litani 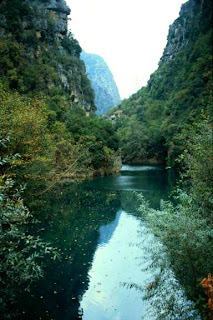 Damian Lataan ably unpacks the phony Iran nuclear weapons narrative, concluding that it's a distraction for the true goal of "occupying, and eventually annexing, south Lebanon up to at least the Litani River and possibly beyond, and also the full occupation of the West Bank and the Gaza Strip with the eventual deportation of the Palestinians living in these places to the Sinai and Jordan."


This narrative has been going on for so long. It seems impervious to facts, but there are facts.

Iran has enriched sufficient uranium to amass a nuclear bomb – a third more than previously thought – the United Nations announced yesterday.
Ah yes. And if you live in Boulder, Colorado, or in Connecticut, or New York City, you have enough U-235 under your house (or perhaps block) to amass a nuclear bomb! Or, Kevin, all that sea water lapping up against the California coast has uranium in it too! I have a call in to the IAEA to inspect your homes!
The issue here is concentration. Mining uranium concentrates it from the ore. Purification and conversion to UF6 concentrates it further. The purpose of the enrichment centrifuges is to concentrate the fissionable U-235.
Concentration is not that hard to understand, but in our science-challenged society (yes, we all hated chemistry, where it was discussed in the first week), it seems not to be a consideration. See also this post from earlier this week.
The concentration of U-235 is 3.49% in the enriched uranium that the Natanz plant is turning out. The IAEA has found no evidence (Download Iran 0902) that any higher enrichment is being produced. 3.49% is not enough to make a bomb. Iran is not in a position to make a bomb, unless there is a bunch of hidden stuff that nobody has found, involving big buildings that can be seen by satellite surveillance.
It would take a reconfiguration of the Natanz facility that the inspectors would notice to produce bomb-grade uranium (concentration of U-235 of 90%). The inspectors also take environmental samples to verify the concentration of U-235. They would have to be kicked out of the facility and their video cameras taken down for Iran to do this.
There are a number of other things in that IAEA report that the media aren't bothering to report, like that the pace of enrichment has slowed. That doesn't support the idea that Iran is racing toward a bomb, so it's not relevant, I guess.

So yes, a big cock-up as anyone paying attention has known for a long time. And as for Greater Israel, I think that is muy ambitious for vicious punks on the run. 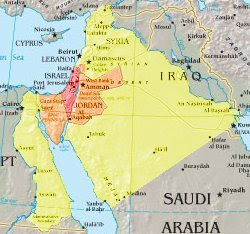 But if they could just get their grubby thieving hands on that little chunk of territory in Southern Lebanon up to the Litani River....

Supposedly there is more than 100 years of reserves in the oil and gas fields offshore.

Maps from Noble Energy show Leviathan within Israel's waters. An official with Norway's Petroleum Geo-Services, which is surveying gas fields in Lebanese waters, said, from Noble's reports, there is no reason to think Leviathan extends into Lebanon. (source)

Or perhaps it's just a little too early to be making claims like this:


“We will not hesitate to use our force and strength to protect not only the rule of law but the international maritime law.” ~ Israeli Minister Uzi Landau, 6/24/10

That's rich coming after Israel attacked the Mavi Marmara in clear violation of international maritime law and also while being in violation of dozens of UN resolutions.

In the last several months, Noble Energy Inc., based in Houston, Tex., and Israeli companies have announced two offshore gas discoveries known as Tamar and Leviathan that they say may hold about 24 trillion cubic feet of gas.

Yet, it is “really too early to say” which country has the valid claim over the underwater resources in dispute, as they “may well extend into Lebanese waters,” Catherine Hunter, a senior analyst on the energy team at IHS Global Insight in London, told OilPrice.com. Without further surveys and drilling, the situation is still unclear, she said.

There is a chance of a “really large-scale discovery,” Hunter said, but the blocks are located within recognized Israeli waters and exploration would not have occurred outside of this area. “It will take a few years to figure out where exactly it is,” and until then “it’s all quite speculative,” she argued.

Leviathan is located 130 km from the city of Haifa in the north of Israel, while Tamar is based around 90 km from the city, Hunter later wrote in a research note. She said Leviathan is also located toward Cypriot territorial waters. Israel is reportedly in touch with the Cypriot authorities, who have not made claims to the find, although maritime borders still have to be officially delineated between Israel and Cyprus, as well as Israel and Lebanon, she wrote.

Details on the size of the finds have also been uncertain, she argued. Leviathan, the larger discovery at 16 trillion cubic feet, has undergone seismic surveys but has not been proven via the drilling of actual wells and testing in the sea bed, Hunter said during an interview, adding this will take place later this year. The Tamar reserve base, estimated at about 8.4 trillion cubic feet, is “more understood” because of the different wells that have been drilled, but it will “take ages” to fully assess as reserves have been upgraded at least twice so far, Hunter added.

...For Israel, the Tamar field alone can cover most of its needs for the foreseeable future, probably as distant as 2025, noted Hunter. The Leviathan prospect, however, will extend the country’s energy independence beyond this and potentially pave the way for gas exports to Cyprus through a new pipeline or liquefied natural gas shipments to more distant markets, she added.

...Most experts doubt the conflict between Israel and Lebanon will spiral out of control into a full-fledged war, as the media have speculated.

“The defense of potential national resources in a poorly demarcated border region is a rallying cry and source of domestic legitimacy at the rhetorical level both in Israel and Lebanon,” CSIS’ Neguizian said. While the gas issue is a source of “political mobilization,” for now it will not escalate into a military matter because the reserves are “little more than an unknown” until detailed geological surveys are conducted by concerned parties, he added.

Battles have been waged over natural resources in the past, but no fighting has ever taken place near the Dead Sea where both Jordan and Israel own bromide deposits, said XRoads’ Zeidman.

And regardless of the “depth and breadth” of animosity between Israel and Lebanon, they have tended to have a “mutual respect” over natural resources, added Zeidman. 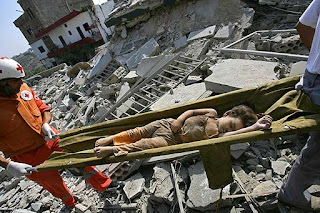 I can't find any maps that say "Leviathan," so it's not exactly clear which one or where that field is, or perhaps they don't quite want to say yet. Maybe the exact location is a secret. 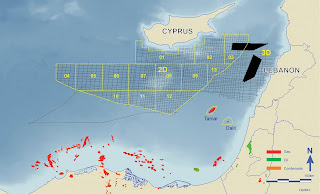 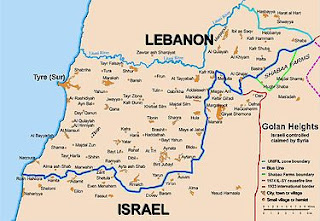 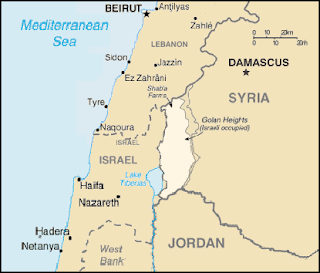 Golan Heights
But you can see from the images that by holding onto the Golan Heights and capturing Southern Lebanon up to the Litani River, and then extending the territorial line out through the ocean....that would be very helpful while they wait for the good news on all this oil and gas. Wouldn't want that to fall into the wrong hands.
Via Voltairenet: Will Israel attack Lebanon to steal its gas?

Various qualified analysts had noted that Israel’s war against Gaza - ruled by the Islamic-Sunni group Hamas - bore a direct relation to the extensive gas reserves off the Gaza coastline on the Mediterranean Sea.
While having a total of 400 nuclear bombs and the best air force in the Middle East - following its recent defeats in Southern Lebanon at the hands of the Islamic Shiite guerrilla of Hezbollah and in Gaza against Hama, it can no longer be said that it still possesses the best army in the region -, Israel is plagued with two critical weaknesses:

1. Water (hence its reluctance to return to Syria the occupied territories in the Golan Heights, bordering on the Lake of Galilee); and

2. Oil: Israel imports over 300 000 barrels daily (most of that oil comes from Egypt), while its gas production is barely sufficient to cover domestic consumption.
We have just wound up a one-month tour of Greece, Lebanon and Turkey, where we measured the strategic importance of the gas reserves both for Gaza and Lebanon, which lie in waters shared by Israel and Cyprus (divided between Greeks and Turks).

...Not without precedents or historical justifications, Hezbollah accuses Israel of planning the "theft" of natural gas from Lebanese territorial waters. The Shiites from Southern Lebanon have already had ample experience with Israel’s plunder of waters from the Litani River.

Israel, on its part, argues that its oil and gas fields do not reach Lebanese waters.

I will borrow some of your videos.