the land of narratives

The other day I lamented that the sources are never good enough for people who don't want to see the truth. If someone wants to believe that the economy will recover and cave-dwelling Muslims did 911 and the judicial system works and all soldiers are boy scouts, their minds will remain impervious to the truth. These Americans believe the onus lies on those who question, not on those who accept. We are all innocent until proven guilty, right? Not exactly. But just so, in the land of narratives, the happy narratives must be true until proven otherwise. And if you suggest that anyone might be guilty of something, other than the Muslims of course, they want proof. Iron clad proof. Like whip some classified documents out of your pocketbook or something. Otherwise shut up. Whack job.


Citing source data is the "scientific method," but does not seem to apply to "Conspiracy Theories." A thousand sources may be quoted, yet will not convince the "skeptics," the "realists."
~ William Blase, from The Council on Foreign Relations and The New World Order
And if you provide proof they will not read it. That's a lot of work you know. Or if they do, they will say you can find anything on the internet, so therefore the links are tainted and not to be trusted. The internet is full of garbage. A rebuttal always lies close at hand. At the same time, the internet is great because that internet taint only affects the conspiracy theorists who make disparaging remarks about sacred truths. And if Osama issues another warning from the grave, you can take it to the bank and deposit it with your worthless inflated dollars that the fed created out of thin air, and lay your untroubled head on your pillow knowing that our soldiers are out there fighting for our freedom to have illegal drugs. Sweet dreams in the insane land of narratives. 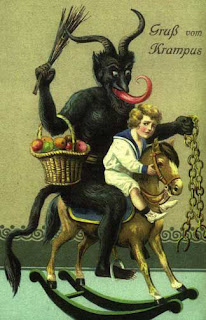 "Did you know that in Europe, a ferocious, frightening figure named Krampus accompanied St. Nicolas on his visits to children who slept with visions of sugar plums dancing in their heads? Yes it’s true. During the Christmas season as St. Nicolas was leaving gifts for good little children, his friend, Krampus, would be punishing the children who had misbehaved."
~ Paranormal Girl
Will Krampus come for all the infantilized, misbehaving adults in America?
The truth is the most important thing. But people are afraid of the truth because the truth is hard. It's not that the truth had to be hard, but people made it so, step by step. People listened to lies and followed liars and made mistakes, and now the truth is hard. It's a long way back from the fork in the road. And people don't actually appreciate having that pointed out. That's very annoying.


And this is the point of danger. Because the truth is simply the truth. It takes great effort to cover it up but the truth requires no assistance because it stands on its own. Some people will fight to keep the truth suppressed because they feel threatened by it. If you happen to be telling the truth, they will fight you. It may be a family tiff over the BBQ, or it could be more serious.

We have a phenomenon called gang stalking in this country, also known as ORGANIZED stalking. Which is a very appropriate way to think of it, because it's groups of people who have enlisted themselves in the war against the "dangerous" people who tell the truth.

Significant numbers of group stalkers were reported in groups of between 3 and up to 50 stalkers working as part of a team or group, numbering in the tens of thousands.

Seems unbelievable. Not so. From the home page of the website Are you targeted?

After studying the targeting ecosystem, I have concluded that psychological warfare techniques, clandestine technologies, and large networks of informants have been used to eradicate or discredit whistleblowers and opponents of powerful people for decades. There are so many people involved that the mechanisms of targeting can’t be hidden. In essence, this is an open secret, kept out of the general public’s awareness by several factors which the masterminds behind targeting programs have fully accounted for:
While these political weapons have been used against government officials and employees to keep them “in line” since the 1990′s or before, reports about this type of covert activity have been flooding in since 2001. It seems that there is now a global, and currently invisible, purge of undesirables underway. Interestingly, people who were illegally experimented on in previous government programs (such as MKULTRA), or targeted decades ago by governmental organizations like the East German Stasi, appear to be the highest value targets.

As we might expect from studying the mass purges of the 20th century, this pogrom has the implied support of the majority of the population. There is a societal dance of denial in progress, and it takes the willful ignorance of the general public to keep the dance going.

A program like this has the implied support of otherwise friendly people because they are afraid that People Who Expose The Truth Will Ruin Everything.
AS IF everything has not already been ruined. 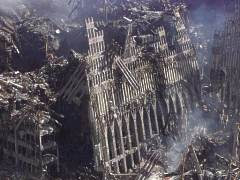 So you ride yourselves over the fields and
you make all your animal deals and
your wise men don't know how it feels to be thick as a brick.
Jethro Tull

You can read all about targeting at Are you targeted?
Here's another website about it: Targeted Individuals. From the Gang Stalking page:

Under Occupational Health and Safety laws, individuals are being flagged and placed on community notification lists. This is happening without the targets knowledge. In many countries these community notifications are being used by companies and others to target innocent individuals such as whistle-blowers, the outspoken, etc. In conjunction with these notifications, companies and others are in some cases using a practice that was used in the former soviet union called the psychiatric reprisal. This is used as a means of retaliation, blacklisting, silencing, or controlling members of society. Once on the notification system, warnings about the targets are sent out to every individual the target comes in contact with, thus poisoning their associations, and socially annexing the targeted individual.

...The individual is then placed under overt and covert forms of surveillance. Everywhere the Targeted Individual goes, their name is flagged. In a big city this could mean that thousands upon thousands of people are getting a notification about the target. The person is followed around 24/7. Foot patrols and vehicle patrols are used to follow the Individual around, as part of the monitoring process.

...Gang Stalking is experienced by the Targeted Individual as psychological attack, that is capable of immobilizing and destroying them over time. The covert methods used to harass, persecute, and falsely defame the targets often leave no evidence to incriminate the civilian spies.
It’s similar to workplace mobbing, but takes place outside in the community. It called Gang Stalking, because groups of organized community members stalk and monitor the targets 24/7. Many Targeted Individuals are flagged, harassed and placed under surveillance in this way for months or even years before they realize that they are being targeted by an organized protocol of harassment.

Once a person is flagged or has a warning marker placed on their file, the community becomes hypervigilant, and within this structure there is a targeted and illegal protocol of harassment that happens. Electronic means are used to monitor, harass and torture the target. When the target tries to describe what is happening to them, it sounds as if they have had a mental breakdown. The reality is electronic means are being used to make it appear as if the target has had a breakdown.

This is all funded by the government. This is accomplished by Americans against other Americans.
They call themselves patriots.
See: fusion centers
See: diehard resisters
See: on charging at windmills
All of this organization and abuse necessary because so much truth has been suppressed that it requires a monstrous system to remain covered up.
But the truth is the beloved. 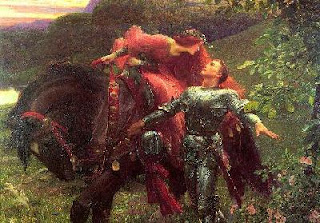 Amen Lord I feel the same way. I would have never believed Americans would fall for simplistic nonsense like this if I hadn't seen it with my own eyes.

The Germans running around all giddy over Adolph Rothschild had nothing on some of these morons.

Amen Lord I feel the same way. I would have never believed Americans would fall for simplistic nonsense like this if I hadn't seen it with my own eyes.

The Germans running around all giddy over Adolph Rothschild had nothing on some of these morons.

I felt the need to borrow some of it.
thanks

by all means please feel free...

Stunning post A.P. The methods of the Secret State are far more finessed than the Cheka of old.

That Krampus character was a new one for me. It makes the Horus worshipping feast of the 25th December seem like a harvest time. Interesting perspective – I might need to let that one rattle around in the grey matter for a while.

oh indeed they are very clever the way they go about harassing people now.

krampus is new to me also. will have to ask mutti. i do find a lot of cool sites when looking for pictures for the posts.

I was sure that when the O-man took office that the authoritarian followers would have a constant psychic saw gnawing at their rock hard cognitive dissonance regarding government over-reach and who may be labelled a terrorist. I was wrong. They still believe their government can do no wrong in our war on a human emotion. Even when a pack of damned libruls is running the show.

Excellente, AP.
"It's not that the truth had to be hard, but people made it so, step by step. People listened to lies and followed liars and made mistakes, and now the truth is hard. It's a long way back from the fork in the road."
That's been the greatly discouraging observation through the last decade especially.
Some non-violent words written by me resulted in a visit by black-suits, yet when I reported to 'authorities' specific death-threats on me, nothing happened.
So it goes. But, as Matthew says, we'll never succumb to fear. Amen, sister.
respects

bho, that does not sound fun getting visits like that. tho we know the intimidation comes in many flavors and levels. and they will escalate if necessary.