banks piss on the third rail

They tie up heavy loads and put them on men's shoulders,
but they themselves are not willing to lift a finger to move them. ~ Matthew 23:4
The foreclosure fraud scandal continues to grow.

There is no third party between the person who pays the mortgage and the bank who cashes the check. It's very straight-forward. And considering that, for many Americans, after they pay a third of their income to the IRS (ie: the Fed, to mostly pay interest on the national debt), housing takes the next huge chunk of their (flat) income. And these are heavy burdens.


1) The American people, through the bailouts, already paid the banks enough money to pay off every mortgage in this country.
2) This is about property rights.
The banks are pissing on the third rail. Given certain conditions, there might be an unpleasant feedback loop. 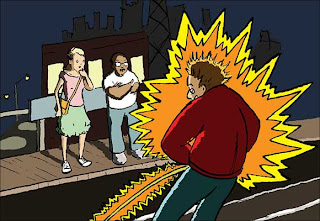 “The currents and the voltage that we’re dealing with are at the levels you should respect.”
Further reading:


Ellen Brown, Foreclosuregate: Time to break up the too-big-to-fail banks

Charles Hugh Smith, The rot within: Our culture of financial fraud and the anger of the honest

Hey Campo,...One point of fact that my colleagues and I are telling anyone who will listen is this: Under the law of contract, there can be no variable component; for a contract is determined to be set in concrete and thus indefatigable and without variance.

If you know anyone with a "variable" interest rate, they do not have an enforcable contractual obligation, as there can be no contract made where there is a "variable" component.

hi V. that's good. seems like the scales will be adjusted soon.

I can see a rug pulling act coming very soon. Lots of very worried homeowners recently may have seen a light at the end of a very dark tunnel with the breaking of this story. Can they renegotiate and stay in the property while the legal ‘stuff’ gets sorted?

Not bloody likely. It seems that CONgress is seeking to pass a law granting the banks immunity from their fraud. Yo’mama already used a pocket veto already to halt one (must be a election coming). It’s full steam ahead and ramming speed for the banksters again. Will this finally light a fire under many asses? Time will soon tell.

well if the congress people want to be lumped together with the banks... ok. if they insist.

Yep, it should enhance target acquisition – maybe even cut out some middle men. I think we are going through a time where all their veils of secrecy will be stripped away. These corporate shills cannot maintain the BS wholesome image and still be the whores we know then for.

I my personal experience it’s like the moment when you realise you’re in an abusive relationship and the scales fall from your eyes. All of the years of pain and misery that have been excused for altruistic reasons are exposed and there is no going back.

that's exactly right Chuck. once you see something like this, like the scale of corruption, you can't un-see it ever again. the scotoma is cleared.

we better tell them. ; D

Hey AP, I have been following the foreclosure scandal, and it seems as if the housing bubble was created intentionally, as is obvious. Or should be.

But the reason for it's creation was to bundle the mortgages into these CDO and sell them as prime investments.

So the banks needed to hook as many homebuyers into the dream as they could.

They were thinking long term on that one!

AP - Love the vid. What a jew-fest. It's like soooooo kind of all these hebrews to take an interest in the poor goyim that their cousins are kicking them out of...hahahaha

it didn't publish the words "and the homes"...sorry.

Pen, yes it definitely looks pre-planned. however, i'm thinking they were also planning on getting away with it.... that seems to be not going as planned, at least so far (fingers crossed)....

Timster, ha, no kidding huh? got to get in front of the wave of outrage i guess.